The New Stratos, history and contact with the beast

While they were still sounding out the possibilities of the project, in 2006 something would happen that would completely change the plans: Pininfarina discovered James Glickenhaus' Ferrari P4/5 project, starting its one-off services.

After seeing the result of the P4/5, its excellent level of detail, and the capabilities to build a truly unique car tailored to the client, Stoscheck and Hrabi had it clear: Pininfarina was the one to build the new Stratos.

Even so, they took their time, and it wasn't until September 2008 that the deal for the creation of this car, which has taken two years to complete, was finalized.

The premises when creating the car from scratch were clear: to maintain the original spirit of the Stratos by keeping the key elements that marked its character. Stoscheck defined these aspects as follows:

Hrabalek would be in charge, along with Stoschek, of transferring and controlling the project together with Pininfarina, helping to guide the aesthetics of the car.


Borgogna's work started on the design provided by Fenomenon.

Luca Borgogna was the Pininfarina man on whom fell the responsibility of drawing the new car, starting from the ideas of the Fenomenon, but perhaps aiming for a more elegant and softer look than Hrabi's baroque and compact project.

To base the project on something solid, the starting point was a Ferrari 430 Scuderia, of which little more than the skeleton and mechanics remained. As Stoschek has remarked more than once, the approach of the New Stratos and the original Lancia Stratos are very similar, in that both use the mid-engined Ferrari mechanicals of the time as a base, and use components from the Fiat group to create a car with its own character and personality.

Taking the chassis of the 430 Scuderia, this was cut 200 millimeters in its central section, to lose battle and leave it at 2,400 millimeters, which by today's standards is really short. The A-pillar was moved 250 millimetres into the car to achieve the desired windscreen shape, with the seats much more centred and closer together.

After the chassis modifications were made, these were dressed with a carbon fiber body lacquered, but not painted, leaving the mesh of such a spectacular material through it. Curious details are the spoiler on the rear hood, reminiscent of the original "shopping basket handle" of the Lancia Stratos, but evolved. Its function is twofold, serving as intake intakes for the engine bay on the sides, and aerodynamic stabilizer in its main upper part.


Every step in the design process involved making decisions

On the rear there is a huge spoiler very similar to the original, which despite looking like an "aerobrake", actually creates a compensated aerodynamic load, working with the help of a very elaborate rear diffuser and a flat bottom with skirts studied in the Pininfarina wind tunnel to offer an outstanding wind behaviour. So good that it even surpasses that of the original F430 Scuderia, and that, given the fact that it is a shorter car, is a truly remarkable achievement. 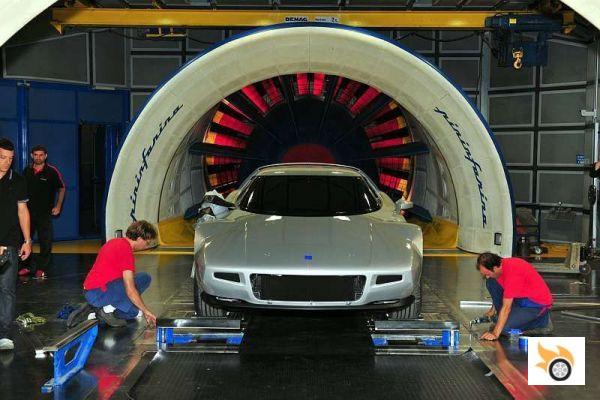 The car spent a good number of hours in the wind tunnel.

The Scuderia chassis was fitted with a safety cage made of chrome-molybdenum steel with a diameter of 40 millimetres and a thickness of 2.5 millimetres, under FIA safety regulations, giving the car safety on the one hand, and impressively increasing the rigidity of the chassis, contributing to its torsional and bending rigidity having higher values than the original model of the Cavallino.

To create the final car, no expense was spared, and as if it were a production model of a large manufacturer, a lot of time was invested in analyzing the packaging of the mechanical elements, really complex given the limited space available. Scale models of the various final design proposals were created so that the owner could choose the one that best suited his eye. 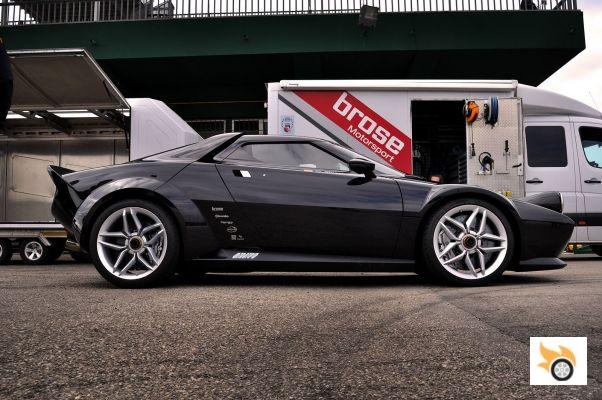 The final design has been taken care of down to the smallest detail.

In each part, in each component, the aim was to reduce the weight as much as possible, changing, for example, the steering assistance system for an electro-hydraulic one, or the window lifter mechanisms, developed ex-profeso by Brose, being the lightest ever thought of. The air conditioning was not removed from the car, to try to avoid one of the original problems of the classic Stratos: the tremendous heat in the passenger compartment.


The cockpit retained the controls of the original Ferrari, but created a "full Stratos" design, thanks to a watch panel with a polished aluminum plate that houses the dials in the same amount as the classic model. The steering wheel is that of the Ferrari, but flattened at the bottom, and the dashboard is reduced to its minimum expression. The doors retain the idea of having an integrated helmet holder, and the gearbox is still Ferrari's sequential gearbox with paddle shifters behind the steering wheel. As mentioned above, the driver and passenger seats are much closer together than in the 430, and are the specific size Stoschek needs. 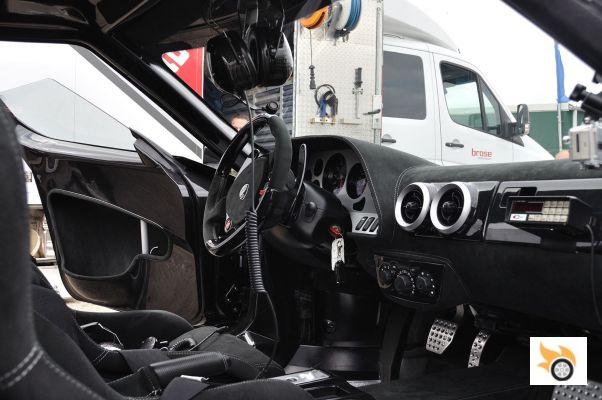 The brakes were retained from the Scuderia: carbon ceramic with rigid Brembo calipers. The weight distribution was changed to 44% in the front and 56% in the rear, totaling 1,247 kilograms, less than the original Ferrari despite the integration of the safety arch.

The suspension was modified, with new, stiffer springs, while uniball ball joints were fitted to replace the original ones to better control wheel travel with suspension movements. The Sachs variable-rate electronic dampers were also reprogrammed to suit the needs of the new chassis and weight distribution.

Extensive track testing was done on this package in the hands of Tiago Monteiro, Brose-sponsored WTCC driver and former F1 driver, in which various suspension and tyre geometry configurations were tested until the most suitable and closest to the character sought for the car was found: An agile car, agile for changing trajectory, turning flat, and at the same time being stable in a straight line.

The engine received a new exhaust system developed by Capristo, so its power was increased to 540 horsepower at 8,200 revolutions per minute, with a maximum torque of over 519 Nm at 3,750 rpm. This gives the car a power to weight ratio of 2.3 kilograms per horsepower. 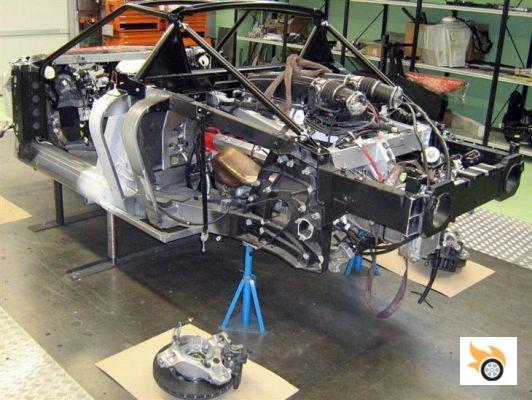 With the project completed, and to Stoschek's liking, the new Stratos was shown in 2010, and the most important international press invited to test it at Paul Ricard. But before that it also passed through the hands of Luca Cordero di Montezemolo, the head of Fiat, who was pleasantly impressed by Pininfarina's work, and Michael's determination to make his dream a reality.

How does it move?

If the aesthetics are a perfect modern reinterpretation of the Stratos, the dynamics are no less so, bringing into the 21st century each and every one of the basic features that made the original Stratos such a rallying success. The car is agile like few others, able to put its nose where its supposed rivals would understeer, and to shift into gear without inertia. 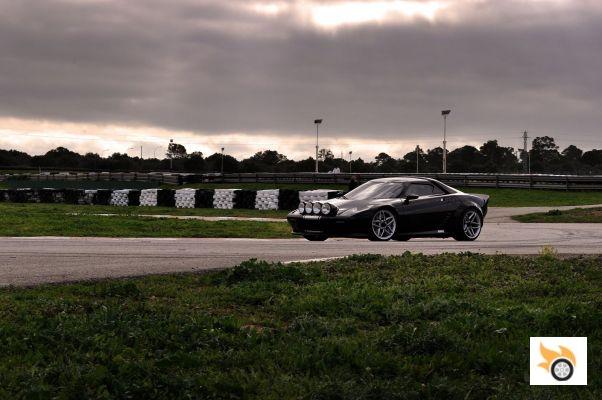 Thanks to modern electronics, and the fact that Ferrari's electronic controls have been retained and reprogrammed, it is easier to drive than the Stratos of the 1970s, with stability control, ABS and traction control, although the electronic rear differential has been replaced by a mechanical Drexel differential, which is lighter and more capable of changing the torque distribution in the rear for intensive use.

The short wheelbase, for this reason, is not a problem, but an advantage, because what the driver is not able to control, the electronic controls take care of it. And it moves just on that fine line of unstable balance, in which very little is needed to change the line of the trajectory. A condition that without electronic aids would be crazy to maintain, but that with them helps it to be a completely fearsome weapon. 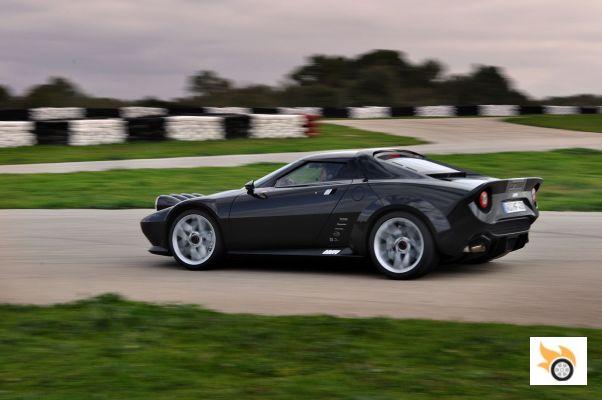 The car has been tuned by comparing it with the original F430 Scuderia, and also confronting it with the 911 GT3 RS, highlighting the new Stoschek's model just in what he wanted to highlight: Slow and medium cornering, ability to change trajectory, incisive nose, precise steering like a scalpel... A machine ready to beat any other in a stretch of curves of any asphalt world championship rally. And thanks to the progressive electronic control, short wheelbase and low polar moment of inertia, the car can be driven and steered with the attitude the driver wants, going from understeer to oversteer at will. You can play at cornering "911 style", braking very late, then pulling into the apex of the corner and applying full torque once you've entered it, and then you'll realise that there's enough traction for it, while the butt smoothly rounds the line under acceleration. If, on the other hand, you want to go into the corner "rally style", with the nose already looking at the apex of the corner in controlled oversteer, you can do that too. That's the good thing about having so little polar moment of inertia: you can drive the car in the style you prefer, and it adapts to the circumstances.

Playing without ESP must be "top league", and it must make you exude adrenaline from the pores, but for the moment those sensations are out of our reach, and only Michale Stoschek and his son Maximillian, the only ones who, together with Tiago Monteiro (the one in charge of tuning the car) have been able to test the beast "without electronic controls".

Be that as it may, what has become clear to us is that the Stratos is a car of sensations with which to have fun and enjoy the most twisty roads you can find, rather than a machine designed only for pure top speed or acceleration figures.

The future of the "New" Stratos 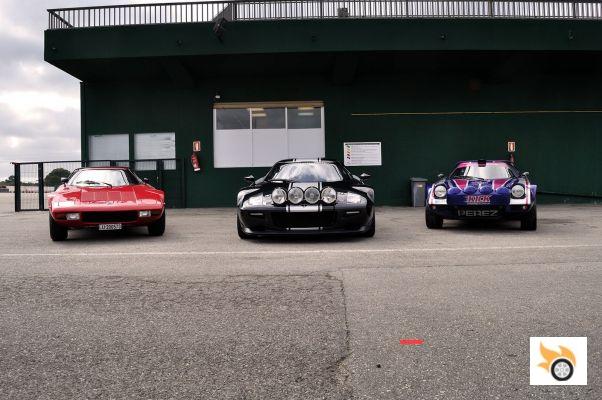 Although Michael Stoschek tried to serialize up to 25 units of the car, with the collaboration of Pininfarina, the refusal of Ferrari to provide materials for the construction of the car from Ferraris 430, and the veto that Fiat placed on Pininfarina, made that the 400,000 euros that each car was going to cost came to nothing. There were up to 50 people interested in buying one, but in the end, the New Stratos will remain a very expensive whim in Stoschek's garage.

We like that it exists, and we like it as a car, but it's a pity that it will remain a "one-off", instead of decorating the stages of rallies and sportscar rallies. A pity.

From the Lancia Stratos to the New Stratos: The story of the dream machine 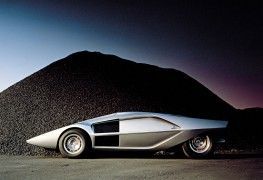 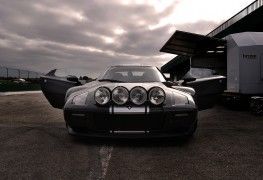 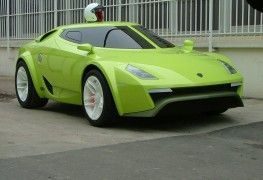 The MINI Superleggera is still in question. ❯