On this occasion we were not able to test the new automatic transmission, but we got behind the wheel of the model that represents the heart of the range, the best-selling among individuals and fleet: the 2.0 HDI with manual transmission. Of course, the brands, as always, take great care to leave us ultra-equipped cars, so we tested it with the Allure finish and numerous options.

The Peugeot 508 was launched in 2010, replacing the 407 and rivaling the Citroën C5, Renault Laguna and Ford Mondeo. In early 2014 it went across the design table again to receive a facelift. The Peugeot 508 is the first mainstream model to sport Peugeot's new aesthetic language inaugurated with the Onyx and Exalt concept cars. It is not a spectacular design like Mazda or Nissan, but it has the merit of returning to the Peugeot something that was crying out, a little more beauty and consensus. 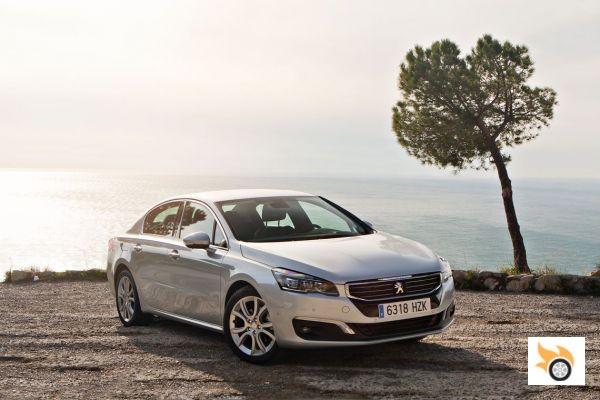 Recovering the front and the look of the Exalt, the 508 wins a more serious look and, above all, much more character. The 508 recovers a vertical grille while the lion is back in the center of the grille, with some pride we could say. The headlights, of course, are new, as are the bumpers with their LED daytime running lights whose shape could be that of a lion's fangs. The profile and the rear do not change so much visually, but the lights are new and with the new bumpers, the 508 has grown 38 mm. It should be noted that the rear of the Station Wagon post restyling remains identical.

The 508 restyling gives Peugeot a new look and a new design consensus.

The other major changes to the new 508 are under the bonnet. With the restyling, the 508 is now available with the new 2.0-litre BlueHDi diesel engine in two power variants: 150 PS with manual transmission and 180 PS with automatic transmission. The BlueHDI engine range is none other than the new generation of PSA diesel engines that comply with the Euro6 standard. In order to reduce NOx (nitrogen oxide) emissions, most manufacturers use various SCR (Selective Catalytic Reduction) systems. One of them is the NOx trap. This selective catalyst without the need for a liquid additive traps the NOX in a lower layer. As it is circulated, the NOx is heated and transformed into ammonia (ammonia is necessary for the chemical reaction that transforms NOx into nitrogen). It is a cheap system, but it consumes more energy than others. There is also the "solid" SCR, which is more efficient, but also more expensive and bulky. In this case, the necessary ammonia is present in solid form inside the catalyst in a metal alloy in which at least one of its ligands is ammonia (NH3). Finally, many also use the SCR system with the injection of water and urea, the famous AdBlue. Peugeot has chosen to combine the FAP particulate filter with additive and urea injection. The water with urea is injected between the oxidation catalytic converter - the first element in the exhaust line - and the SCR, the FAP filter being the last element in the exhaust line. 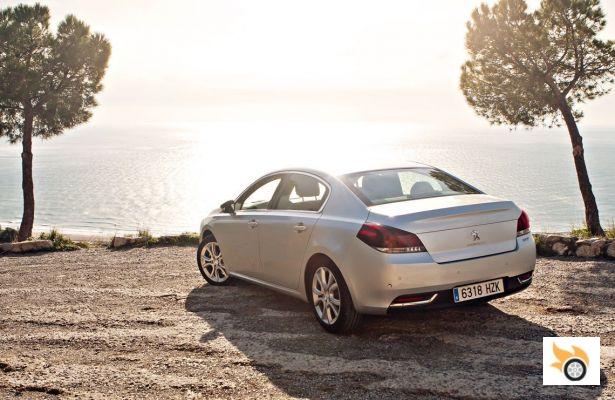 The advantage of this system is that the FAP can be at the end of the line because its regeneration is done at lower temperatures than other filters and thus leaves free space just after the oxidation catalyst, a hotter area ideal for urea injection. With this architecture, Peugeot makes exhaust gas decontamination more effective at low temperatures, for example on short journeys or in congested urban areas. In the end, the only thing the driver needs to know is that the FAP plus AdBlue injection has an impact on the maintenance of his vehicle. It is the price to pay for driving a diesel.

While the restyling is more evident on the bodywork, it is much more discreet in the cabin. The main new feature is the new central screen of the infotainment system, which is now touch-sensitive. Thus, the circular control knob of the previous generation disappears and we find a small hole to keep the change in the toll or some candy, because it does not give more. And there aren't many other places to store objects (wallet, mobile phone, keys). The central glovebox is also small and opens in a strange way: sideways and facing the passenger. It must be that it's designed so that only the co-driver keeps his or her things there. Similarly, the head-up display settings and the buttons to switch off the stability control or the stop/stop/auto-stop are hidden in a hatch under the dashboard. In terms of ergonomics, that's usually a fail. 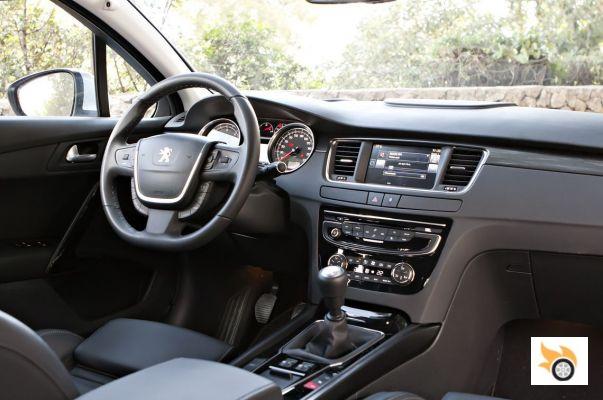 The 508's roominess is generous and its finishes are correct.

The touch screen is a good idea and its location is ideal for reading it, but I found it a bit too far away to be able to operate it safely, as you have to extend your arm more than necessary. Of course, in theory, you shouldn't be fiddling with the screen while driving. That's why Peugeot has fitted the 508 with a comprehensive multifunction steering wheel. It takes a while to get to grips with all the available functions and menus, but once you've got to grips with it, you hardly ever touch the screen again. Which, incidentally, is a good thing, because it's one of those that gets dirty easily. Which brings me to the materials.

The finishes are OK to good, but those of a Citroën C5, to cite an example from PSA, seem superior to me. Also, in the case of the 508, the "piano black" plastics have a tendency to scratch easily. The equipment, meanwhile, is completed with new technologies, such as the blind spot warning system, reversing camera and full LED headlights.

In the front, the seats are supportive, despite their sporty look; in favour, they offer the possibility of an adjustable length. In the front seats, the roominess, although good, seems to me to be inferior to that of the new Ford Mondeo or Citroën C5. In the back, however, the roominess is generous for 2 adults, but the central passenger will not be very comfortable (as in almost all cars).


The boot of almost 500 litres (473 litres, to be precise) is average for the segment. However, the load threshold is a bit high and the boot opening could be wider if it weren't for the rear lights.

Once at the controls of the new Peugeot 508, I was pleasantly surprised by the good soundproofing and the low vibrations, even when the engine was activated in the automatic stop/start phases, which this diesel engine boasts. The 2.0-litre 150 bhp is smooth and offers good recovery from low revs (80 to 120 km/h in 4th gear in 7 seconds), but there's no need to rev it too high, as the maximum torque of this engine, 370 Nm, is at 2,000 revs. 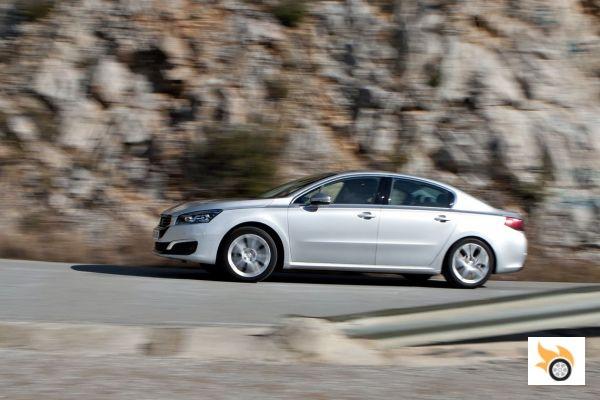 The 508 continues to offer one of the best comfort-to-dynamic ratios on the market.

The gearbox is pleasant to use in relaxed driving and city driving, but it is a bit clumsy in sporty driving. In any case, it is not the vocation of this 508, as evidenced by its chassis. At the front, this 508 uses a McPherson strut front axle, while the 180 hp and 205 hp GT models have a double wishbone front axle. Even so, our 508 is relatively incisive and precise on twisty stretches (although I would like a better brake feel), while on fast roads and motorways it displays refinement and comfort of a high standard. The Peugeot 508 continues to offer one of the best comfort-to-dynamism ratios on the market. The car filters road irregularities very well, isolating its passengers from the outside world, while correctly limiting body movements. 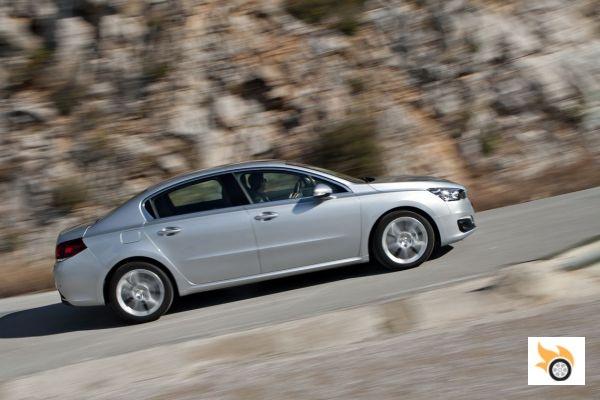 As for fuel consumption, to close this driving section, Peugeot announces an optimistic fuel consumption of 3.9 l/100 km on average. The reality is much less pretty, with an average (city, stretches and motorway) of 6.8 l/100 km over the course of our test. You know I'm a happy-go-lucky kind of guy, but even with a relaxed driving style it will be very difficult to go below 5.5 l/100 km on the highway at 110 km/h.

Despite having a full range of optional equipment (LED headlights, automatic high beam headlights, four-zone climate control, blinds, blind spot detector and reversing camera), the standard Allure finish (from 31,070 euros with discounts) is quite complete. It includes, for example, the head-up display, hands-free opening, locking and starting, the call and emergency location (SOS Peugeot Connect), LED fog lights with cornering function, the audible parking aid in rear bumper and dual zone climate control. The settings for the head-up display, the ESP (ASR) and the automatic stop/start are hidden in a cheap plastic box with apparent wires. Which doesn't help to get a good picture of the finish. 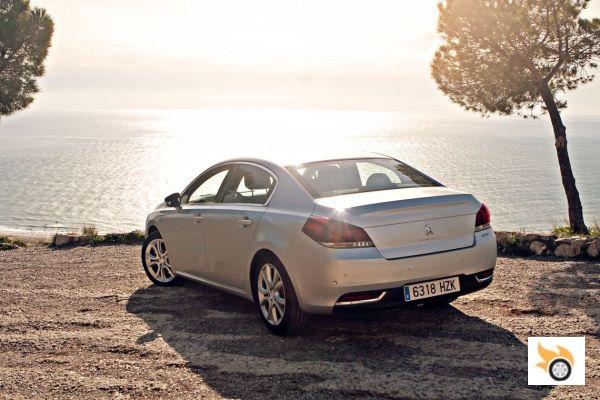 It's not that it's a plethoric equipment, but it's not spartan either. The difficulty is that some of its rivals enjoy an even more aggressive discount policy than Peugeot. For example, the Ford Mondeo in TDCi 150 hp version can be obtained for just over 26,000 euros. Similarly, in a similar price and power range, the new Mazda6 offers superior quality, the same refinement and a much higher residual value than the Peugeot 508. And then there is the case of the Volkswagen Passat, king of the segment in Spain, which has grown significantly offering a much higher habitability than the Peugeot, a TDi 150 engine with NOx trap (solid SCR) with low consumption and a high residual value. Let's just say that the Peugeot 508 is in the middle of the segment, a bit like its bodywork: it's OK, but no more.