Maybe it was the too-classic design or the obvious kinship with the Mondeo or both, but it wasn't a bad car, on the contrary. Despite the failure of the X-Type, Jaguar tries again, changing the recipe, and offers us the XE. For Jaguar, it's a luxurious yet sporty saloon. Let's see if this time, Jaguar has a winning hand. 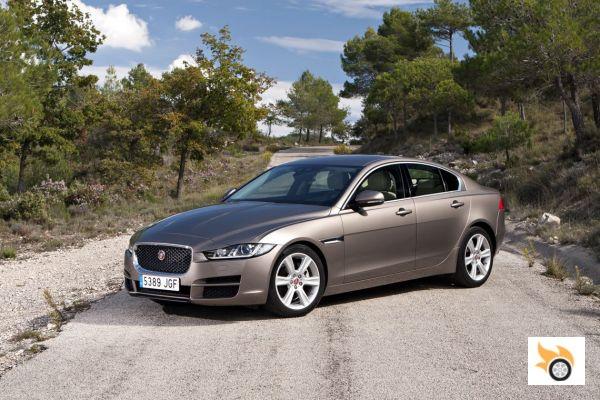 Jaguar got very scalded from the X-Type adventure (2001-2009) and thought it would never return to this segment. However, with the financial faucet opened wide thanks to Tata and the radical change in the brand's design, masterfully operated by Ian Callum and his team, Jaguar is back. Not only are the platform and engines (first diesel and then petrol) new and home-grown, but the factory that produces the XE has undergone a complete overhaul. It is rare that so many changes and investment are allowed for a new model. It just goes to show how important the XE is to Jaguar and Tata.

It's hard for a car in this segment to have a more aggressive look.

With the first generation of the XF (2007), Jaguar's design changed and abandoned - at last - the neo-retro styling that sought to replicate to infinity the lines of the 1968 Jaguar XJ (practically designed by Sir William Lyons, founder of the brand). Eight years later, we are in front of the XE, a car with fluid, balanced lines and ideal proportions.

Of course, the front end is aggressive, as in all latest-generation Jaguars. The bonnet that bites into part of the slim headlights near the grille means the XE always has a scowl on its face. It's hard to find a car in this segment with a more aggressive look on the market.


The profile, too, is visually dynamic and exudes the sportiness that Jaguar wanted. Both the nose and profile have an unmistakable Jaguar XF family feel. However, the rear is undoubtedly the most aesthetically unsatisfactory area of the car. The idea of a cut rear, a bit in the style of a coda trunk, fits with the sporty spirit that the brand wants to convey. Unfortunately, the final result of the rear lacks personality. What's worse, it has an undeniable Audi A5 feel to it. 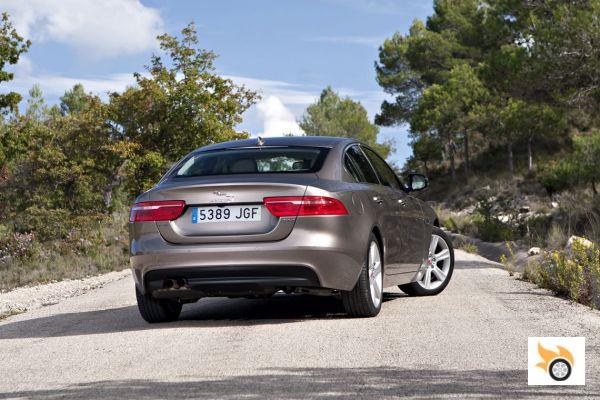 The XE is shorter than the XF by 30 cm. At 4.67m long, it's not the biggest car in its class. In fact, it is within the D-segment average, as is its wheelbase of 2,835 mm. However, the XE's roominess is well outside the segment average. And for the worse. 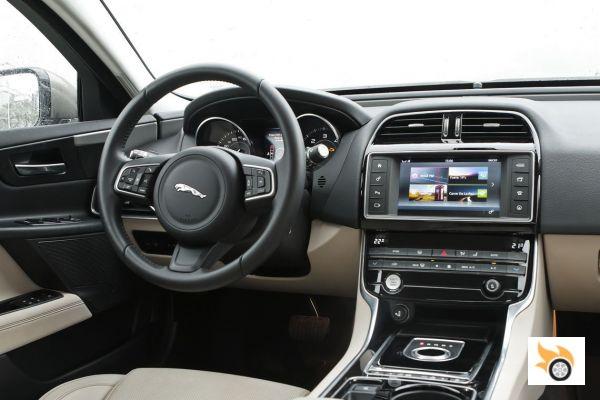 Jaguar has given the cabin the same sporting spirit as the bodywork. The interior design is quite unusual in this segment. Jaguar's stylists have created a very refined dashboard. The central touchscreen (quick and intuitive interface) is integrated and is not a tablet placed in the middle of the dashboard. Some may say it looks bland, but at least it's a coherent design.

The perceived quality, at least in this Prestige version, seemed to me to be inferior to that of its rivals. The difference in the materials used in the different areas of the cabin is blatant. The plastic of the upper part of the dashboard has an excessively hard and shiny softness, while that of the doors is softer and with a more flattering appearance (when the brands usually do just the opposite). The centre tunnel, meanwhile, has finishes that wouldn't look out of place in an XJ. It lacks coherence.


Speaking of the interior, I can't fail to mention, on the one hand, some slight assembly faults, and on the other hand, the strange ergonomics adopted for the location of the electric windows and the car's electrical adjustments. I know that after three or four weeks with the car, I would have got used to it, but the solution adopted is still strange. The power windows, black, are in the upper part of the door, also black, while the memory of the seat adjustments, black, are in the lower part, light-colored; a "more natural" area for the power windows. Yes, every time I wanted to lower the window I moved the seat... It's a rather strange choice that gives the feeling of being added at the last minute. The central locking system is located next to the memory of the electric seats. Another inconsistency.

The interior design is elegant, but somewhat lacking in coherence.

The imposing central tunnel makes the driver feel surrounded by the car, as if he were in a sports car, while the instrument panel is located somewhat lower than in other sedans. Clearly, maximum optimisation of space was not a priority. That doesn't stop the front seats from being relatively spacious.

The seats offer a multitude of possible adjustments (up to 14 positions), hold well and are very comfortable. Only those taller than 1.80 m will miss that the seat can not be lowered more, in that sense a BMW 3 Series offers more possibilities.


In the back, the seats are not as comfortable as in other models. It has nothing to do with the softness of the seats, excellent, but by the space reserved for passengers. It's not that the German premium trio has a tradition of offering good rear roominess, but even the BMW 3 Series - the flagship of the trio in this section - offers more space. In the Jaguar XE, legroom is tight (it's 6cm less than in the BMW 3 Series when the driver's seat back is 100cm from the pedals), while those taller than 6ft 3in may feel some discomfort with their head touching the roof. The priority here is the exterior design, with a roof that lowers, and not the habitability. The central seat is there because the clientele does not like 4-seater cars, but the reality is that it is not usable (central tunnel, narrowness and hardness of the seat). The boot, meanwhile, is not small: it offers 450 litres. Even so, it is 30 litres less, on average, than its main rivals.

The Jaguar XE is more important than it seems for the British company. It's the first car in the group to use the iQ platform, which it will share with the next-generation Jaguar XF and the upcoming Range Rover Evoque. Seventy-five percent of the XE's structure is made of aluminum, the rest being high-strength steels. So the structure is lighter than its rivals (it weighs 251kg), but not the car, which feels heavier (1,565kg in the test unit). The extra weight is partly attributable to Jaguar's decision to equip the XE with double parallelogram suspensions at the front and the integral link at the rear, instead of a simple multilink for the rear axle as in the competition. It's a sybaritic solution, but one that pays off on the road. 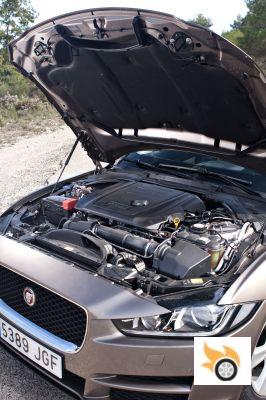 The power steering is electric, as in almost all new models of any brand, although the engineers sought a setting as close as possible to that of the Jaguar F-Type.

On this occasion we were able to test the 2.0d of the Ingenium range. This is a 100% Jaguar Land Rover engine and not the result of agreements with other manufacturers, as is the case with the XE's 2.0-litre turbo petrol engine (a Ford engine made in Valencia with Jaguar's own tuning and which should make way for one from the Ingenium family this year).

This 2.0-litre turbo diesel has all the tech you'd expect in a 30,000+ euro car: common rail direct injection, 4-valve-per-cylinder cylinder head, variable geometry turbo, intercooler and automatic stop/start function. It develops 180 hp at 4,000 rpm and delivers 430 Nm from 1,750 to 2,500 rpm. In the test unit is associated with the ZF 8-speed automatic transmission, standard equipped with a 6-speed manual transmission and long developments. 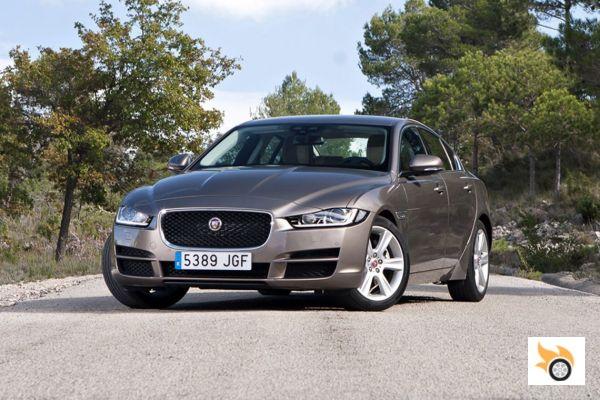 Let's get started. When cold, the diesel engine is very noticeable due to its vibrations and noise, not very premium. When warm, the sound level decreases a little, but the jolt that the stop/start system gives every time you restart the engine is excessive. Its rivals have much smoother systems now, it's as if the XE's is from the previous generation.

The diesel engine in this XE is overly noticeable in all situations.

During acceleration, the engine is also overly noticeable acoustically. At least it offers a performance in the category (0 to 100 km/h in 7.8 s and 80 to 120 km/h in 6.3 s), but slightly behind the German trio.

The 8-speed automatic transmission, meanwhile, helps to erase the feeling of lack of low-end torque. The 430 Nm are available from 1,800 rpm and up to 2,500 rpm; a somewhat narrow delivery zone. The reactivity and smoothness of the gearbox compensate for the lack of torque. Provided we opt for the Dynamic mode of engine and gearbox management and use the steering wheel paddles. 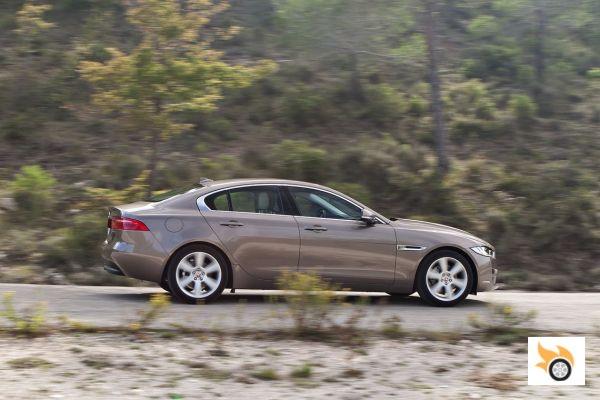 In D mode, the gearbox doesn't back off soon enough (and sometimes it doesn't even do it), while in S mode it systematically tries to rev the engine up past 3,000 rpm, which is useless (the torque practically disappears after 2,500 rpm) and the only thing it achieves is to increase the engine's sound volume in an unpleasant way, as well as the fuel consumption.

Although I'm not convinced by the mechanics, the chassis is much more successful.

While the mechanics don't convince me, the chassis is much better. The electric power steering barely transmits anything, but it is very precise and direct. The front suspension is very lively and contributes to the reactivity of the chassis. In fact, in sporty driving, the car pulls itself to the line, turning neutrally, with very slight oversteer. Despite this, it is very easy to overload the front end - because the car does not transmit. In that case, the car will lengthen the trajectory, but without really going nose first. In other words, it has just enough oversteer to be dynamic and just enough understeer to reassure those not used to rear-wheel drive. 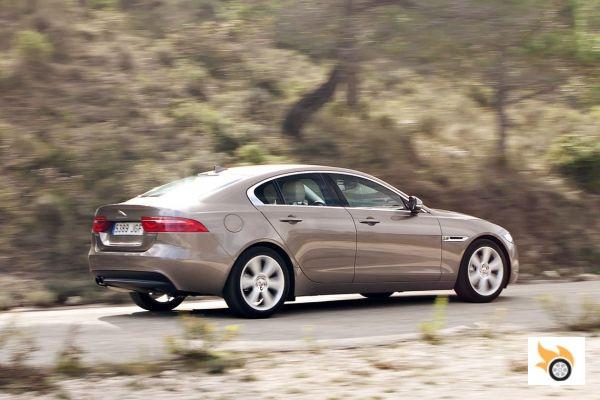 The suspension with piloted dampers (standard with the Prestige trim) is superb. Body movements could be better controlled - the set-up is really comfort-like - but they don't detract from the car's dynamism, with an incisive nose and a well-placed rear end. The damping is very progressive and doesn't detract at all from the high level of comfort it provides in all situations, even when we pick up the pace or drive over damaged road surfaces (although there are a few shudders at low speeds). 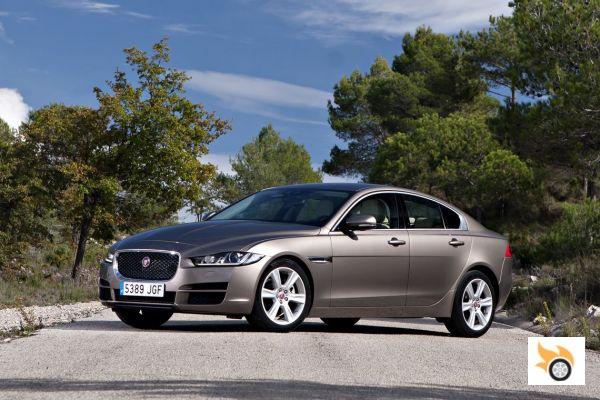 Jaguar wants to offer more and better than the German trio for less money. It's true that the Jaguar XE 2.0d is slightly cheaper than the German trio at similar equipment levels. However, if we look at the list price, the XE 2.0d Auto Prestige costs the same as the elitist Mercedes C220d, while the Audi A4 and BMW 3 Series are cheaper (on average by about 2,000 euros).

Jaguar's new offering is much more than just an alternative for those who want something different in the premium segment. The XE, with its acclaimed design, offers a truly sporty chassis, capable of standing up to the BMW 3 Series, while being as comfortable as the Audi A4. However, in terms of perceived finish, the XE still has some way to go to catch up with the German trio, especially the Audi A4. In terms of refinement, at least in diesel, it also needs to improve. 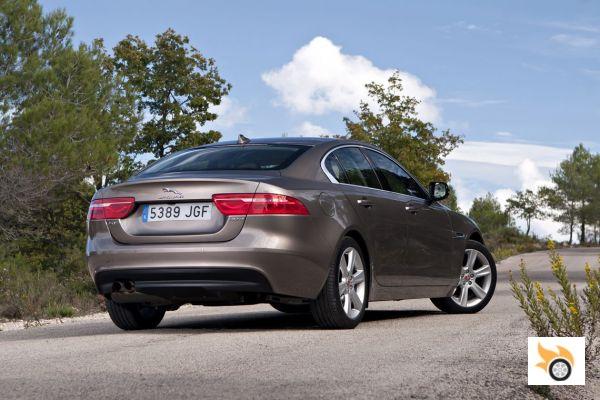 In the end, the Jaguar XE leaves me with a strange feeling. It's a capable, beautiful and dynamic car, but it deserves a much more refined engine with a wider torque range. It's not that the German trio's engines are examples of silence either, quite the contrary, but the XE's is unashamedly noisy for this segment. If the diesel noise doesn't bother you, it's a highly recommended alternative to the BMW 3 Series. 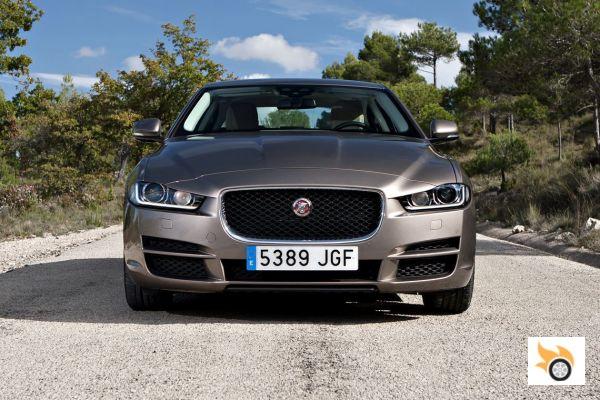