Restoration of the only rolling example of the original "Volkswagen".

According to Paul Schilperoord - Dutch designer as well as columnist, researcher and writer - the true origin of the Volkswagen is the Superior II model of the almost unknown Standard brand. He has started a funding campaign to restore the only remaining rolling example, which appeared with numerous Trabant transplants, but before explaining what the restoration will consist of, we are going to dive into a story of engineers, cars, Nazis, and the Gestapo.

Paul Schilperoord tells us that in 2004 he got his hands on an article by an unknown engineer who claimed to be the true creator of the Volkswagen Beetle. This engineer was Josef Ganz and his ideas seemed convincing, so Paul decided to investigate the subject and finally wrote a book with his work and his life with all the information he found and that we now summarize. 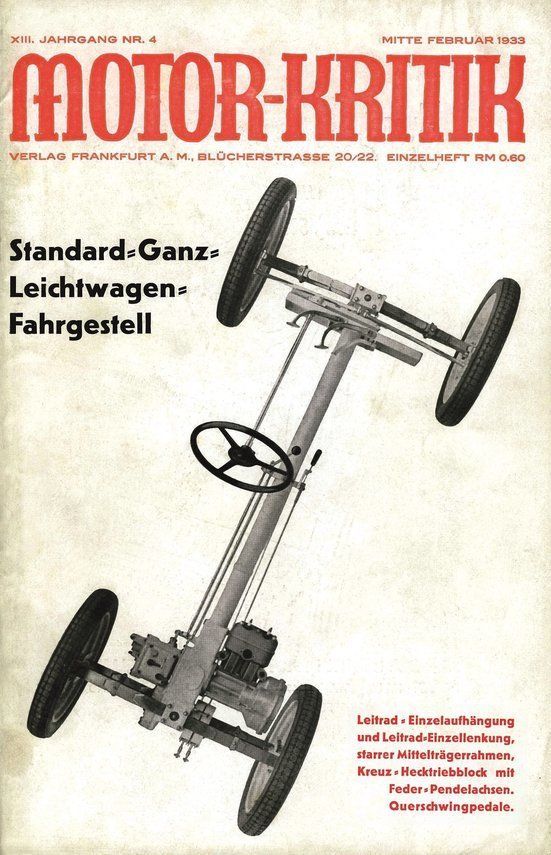 The idea of a Volkswagen is born

Josef Ganz - born in 1898 in Budapest and fond of engineering since he was very young - already in 1920 thought of a tubular structure with all independent wheels and rear engine for a small car that could be accessible to most people. This way he would make it handy, light and cheap. The idea of being all in the back - engine, gearbox and drivetrain - was to simplify the mechanics. He had this idea in mind and proposed it to manufacturers in the magazine Motor-Kritik, where he was editor-in-chief from 1928 to 1933.

During those years there were many small car manufacturers who wanted to build a Volkswagen, i.e. a car for the people. At that time, the word was used in its literal sense, as we would now use the word utility. His recommendations for making a useful car for the German people were: tubular chassis, aerodynamic bodywork, four-wheel independent suspension and a price of no more than 1,000 Reichsmark. Finally he contacted motorcycle manufacturers to reproduce the design he had so highly recommended. He built his first prototype in 1930 and the second in May 1931, which he called Maykäfer, something like "May Beetle", although it also sounds very similar to "my Beetle". Both cars were small two-seater convertibles.


The prototype did not go into production and Ganz combined his work as an editor with that of a consultant to Daimler-Benz and BMW, where he developed with them their first independent suspensions.

In 1933 the company Standard Fahrzeugfabrik finally builds the successor to Josef Ganz's Maykäfer, presenting it at the Berlin Motor Show of the same year with the name Superior, Ganz's idea materializes. The model was closed, with a very circular shape, 3 meters long, two seats and with the characteristics suggested for many years by Ganz: tubular structure, independent wheels and everything in the back.

According to Paul, it was in that show and seeing the Standard Superior, when Adolf Hitler had the revelation that he wanted a car for the German people that could transport two adults and three children at 100 km / h, easy to handle, easy to maintain and as hard as possible, all for 990 imperial marks of the time; he could even make a drawing to F. Porsche to understand it better. In Spain, a country of sayings, in these cases we say that it is easy to know it is a bull when you see its gonads hanging down.

As we know, it was finally Ferdinand Porsche who was commissioned to create the model at Hitler's request, with the ideas of several models, including the original germ of Ganz, Tatra designs and their own developments. Even that idea of Ganz for economic car jumps to other brands and other countries. Mercedes created the prototype 120 (W17) with the same features, and had two production models, the 130 and 170, but they were not commercially successful, probably because their prices ranged from 3,000 to more than 4,000 marks -the A class of the time did not work-.


In Czechoslovakia, the prototype Tatra V570 was very inspiring for the Type 1, the production model was somewhat larger and only about 500 units were produced, because its production was interrupted when Germany invaded that country, so they could no longer say that both models were very similar. We also know that there was no time to produce the Type 1 when it was planned, since the II GM broke out and military vehicles were manufactured based on it. Production of passenger cars began in 1945, only after the Allied occupation of Germany at the end of the war.

The elimination of Josef Ganz

Why hasn't this engineer's name come down to us? There has always been much controversy over the resemblance of the Type 1 to Tatra's V570 and T97, even Porsche acknowledged that it was based on Tatra models. In the early years, and under Nazi rule, these rumors were quashed. Finally, in 1965 Volkswagen AG paid a compensation of 1 million marks to Tatra, well out of time by now, but acknowledging inspiration from their models.

Why is there nothing similar with regard to Josef Ganz? Apparently there is only one reason, Ganz was Jewish. According to Schilperoord, the Nazi government took care to hide all traces of the engineer. Moreover, he was arrested by the Gestapo accused in 1933 of blackmailing German automobile companies, apparently denounced by a partner with whom he had an argument, but later he was released. After this, his contracts with Mercedes and BMW were terminated, as was his contract as editor-in-chief of the magazine Motor-Kritik.


In addition, he was forbidden to use the word Volkswagen for the manufacturer of the Standard Superior. Worse still, during the Night of the Long Knives in June 1934, Ganz was also attacked, although his dog was able to save him. Shortly afterwards, another attempt was made on his home. He was lucky because he was not at home, but he did not return to his home and took refuge in Switzerland. He tried to set up a new automobile company there, but it was not possible. In 1951 he emigrated to Australia to work for Holden, and died virtually anonymous in 1967.

Restoration of the last? Standard Superior

Back to the present day, Paul Schilperoord, together with Lorenz Schmid - Ganz's Swiss-born relative - have set out to restore the only Standard Superior that is capable of rolling. Its appearance is quite different from the original, it is rebuilt with Trabant parts and their idea is to leave it faithful to the original design. To do this they have created a crowdfunding for a value of 45,000 euros on Indiegogo. On their page they offer several ways to collaborate with their project: drive it in its presentation, a commemorative painting, watch their online documentary or even buy the previous models of the Volkswagen Type 1 in 1:43 scale.

It is thought that by September 2018 the restoration will be ready, so far they have raised almost €4,000 at the time of writing. We hope they reach their goal and can restore this small link in the great history of the automotive industry.

If you want more information, you have the website of the Josef Ganz Foundation, which includes the museums where you can see the very few cars that remain, restored, unrestored, or for parts.

All images have been donated by Paul Schilperoord.

add a comment of Restoration of the only rolling example of the original "Volkswagen".