With the arrival of the 991 generation and its innovative soft top (it's actually a coupé-cabrio with a series of magnesium sheets covered in canvas), Porsche engineers saw an opportunity to resurrect the 911 Targa without having to invest huge sums of money. Introduced in 2014, the 911 Targa "as always" is available again. Although only with all-wheel drive, either in Targa 4 (3.4 350 hp), Targa 4S (3.8 400 hp) or Targa 4 GTS (3.8 430 hp) version. Today, we test the Targa 4S version. 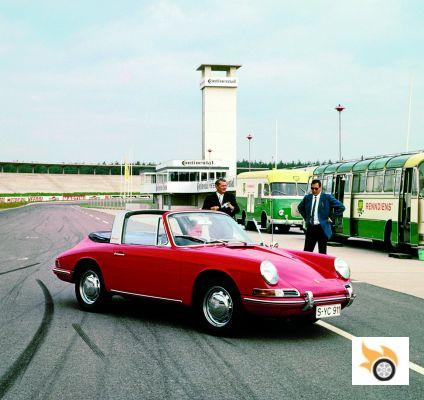 The Porsche 911 Targa was born from a rumor, a misinterpretation of the time. At the end of 1965, Porsche discontinued the 356C Cabriolet and was left without a convertible in its range. The 356 C Cabrio accounted for 16.5% of Porsche sales in its last year of sales. Not that these sales are stratospheric, but it is a significant enough volume to abandon it without further ado, especially in the United States.

The Porsche 911 Targa was born out of a misinterpretation of the times.

At that time, a small internal debate arises in which it is decided whether to develop the new convertible from a blank sheet of paper or on the basis of the newly released 911. Ferdinand "Ferry" Porsche preferred to start from a blank sheet: he considered that a three-volume body was the most adaptaba for a cabrio, while the fastback type rear of the 911 would not do justice. The discussion was short-lived, as the accountants reminded them that they could not afford a completely new model and had to start from the 911.

1965 is also the year in which a young American lawyer named Ralf Nader publishes a book "Unsafe at Any Speed" where he questions the safety of many cars of the time, the most famous case being the Chevrolet Corvair. A great controversy and lawsuits were unleashed in the USA. The book served as a catalyst and in 1966, the NHTSA (National Highway Traffic Safety Administration) became a federal body responsible for monitoring the safety of automobiles. In 1965, Porsche saw how car safety in the USA suddenly came to the forefront and thought that a law would be passed that would ban convertibles completely. 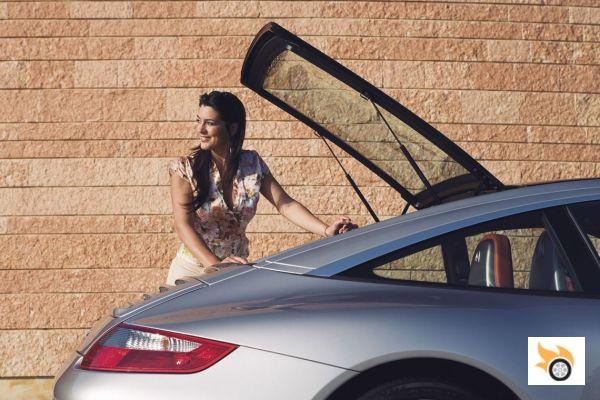 The idea of a Targa body was born (the concept predates Porsche, but it was the German brand that registered the trade name "Targa"). ) The roll bar would serve to comply with possible future US safety regulations (which were never enacted) and, as Ferry Porsche explained, the removable hardtop provided a structure that would not bulge at speed, as was - and still is the case in some models - with "traditional" convertibles with a canvas top.

At the 1965 Frankfurt Motor Show, Porsche presented the 911 Targa concept as "the safest convertible in the world". In the end, the production model did not arrive until 1967, because the concept was not as simple as it seemed. In fact, even the rear window, initially made of plastic so that it could be removed, was changed for a glass one. But the wait was worth it and the success is brutal. In Germany alone, the 911 Targa accounts for 40% of 911 sales. After Porsche, other manufacturers are joining the Targa trend, from Bertone and Fiat with the X-1/9 to Lamborghini with the Jalpa or Ferrari with the 308 and 328 GTS. As for the 911 Cabrio, would not arrive until 1982 and its marketing in 1983. But that's another story. 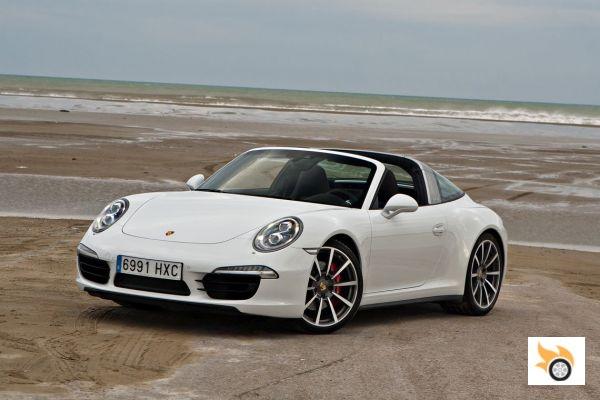 The new generation of Porsche 911 puts all fans of the brand in agreement: it is simply the most successful in terms of design of the 911 water-cooled era. A steel and aluminium chassis, a 10 cm longer wheelbase and a 5 cm wider front track make it more efficient than ever and easier to drive - all without losing its playful and playful side. As has been the case since the 996, the 4S version and its flared rear wings make the 911 an even more desirable toy. The Targa version, meanwhile, continues the tradition of the metal roll bar (now covered in magnesium and not stainless steel as in the past).


The result? A car that has a strong presence. Much more live and natural than in the photos. In fact, the car is imposing. And it's not because of the kinematics of its roof (which opens or closes in 19 seconds), but because once the roof is open, the silhouette of the 911 Targa is sportier than that of the 911 Cabrio. Probably because the rear dome allows the flared wings to stand out, something that doesn't happen in the Carbio. What's more, I'd go so far as to say it's the best-looking 911 in the current range. 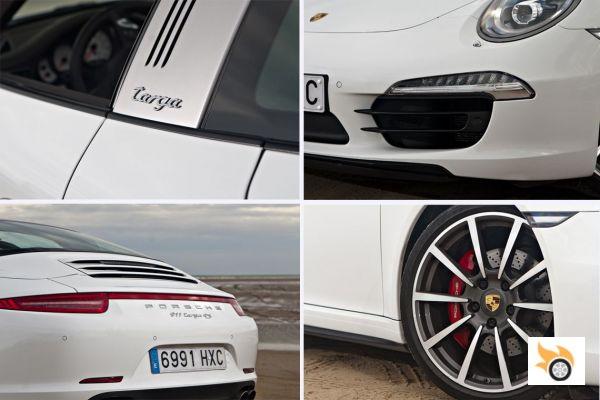 In theory, the 911 Targa brings together the best of both worlds: the sleek profile of a coupe with the joys of driving a convertible. The problem is that in practice, with the roof open, the pleasure the Targa exudes is not the same as in the cabrio. It's true that the feeling of freedom is less -that's always been the case in the Targa-, but what we didn't expect was the air noise and turbulence in the passenger compartment.

Above 110 km/h it's pointless trying to converse with the passenger next to you. Around 140 km/h, the noise is deafening and the turbulence is more than annoying. (I still remember a test of the 911 Turbo 997 in Germany, where my co-driver could talk on the phone at 287 km/h with the top open). I don't mention those in the back, because even though you can fit 2 people in the tiny rear seats, in a 911 they have always been seats for a very short drive. 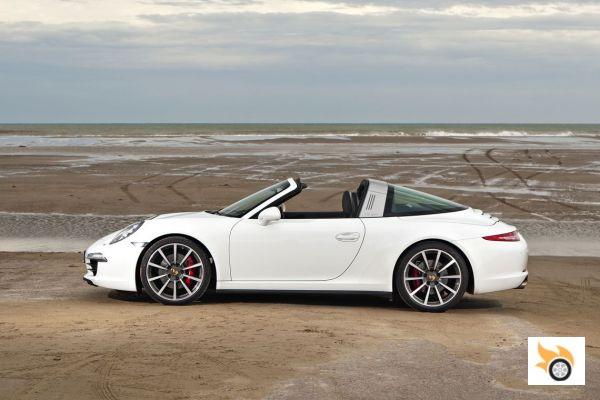 Speaking of noise. I can't stop recommending the sport exhaust option. Of all the equipment that should be standard on the car, the sports exhaust is at the top of the list. In a Targa the point is to be able to enjoy greater sensations, without the sports exhaust we can't enjoy the crackle of the exhaust when we lift the foot off the accelerator or the low roar when we accelerate that the sports exhaust provides. Without this option, the 3.8-litre feels a little muted in terms of acoustic sensations. 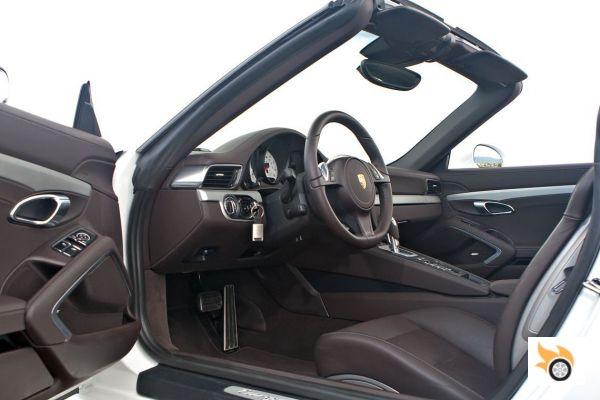 If there's one area where Porsche doesn't disappoint, it's the interior. The design still has its peculiarities, such as the obsession with having a button for each function that makes the tunnel and the center console are filled with buttons like a teenager's face grains, or by the PDK shift buttons, horrendous to manipulate. Another must-have option is the sporty paddle shifters. The finishes are still far superior to the rest of the brands in the group, only Bentley and Bugatti surpass Porsche.

The driving position is perfect and the rear seats, as in any 911, are there for an emergency, or to serve as a second trunk by tilting the seat backs. 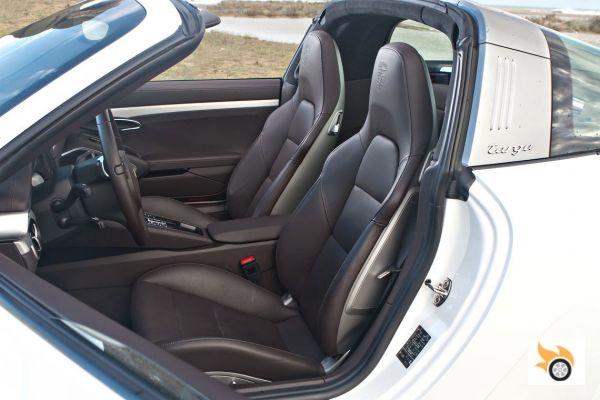 Mechanically, the 911 Targa does not disappoint. The 400 hp of its 3.8-litre 6-cylinder with direct injection allows the car's 1,575 kg (40 kg more than the Carrera 4S Cabrio and 160 kg more than a Carrera S coupé) to catapult from 0 to 100 km/h in 4.6 seconds (with the chrono pack this time would drop to 4.2 seconds). By way of comparison, a Carrera S PDK without chrono pack does it in 4.2 s... Even so, the engine doesn't disappoint: it revs up to 7,500 revs with a will, power and flexibility that seem to have no end in sight. In town and at low revs it's smooth, while above 5,000 it's furious and furious. In combination with the PDK, which our test unit was equipped with, it thus offers acceleration from 80 to 120 km/h in 2.7 seconds. That's an absolutely insane time for a road car. 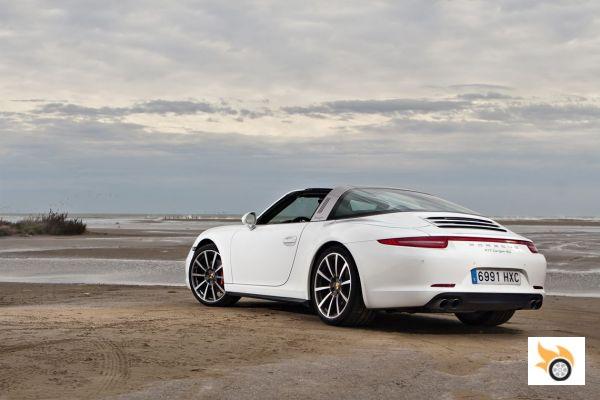 Here, for a moment, I have to talk about material considerations, I know it's ugly to talk about these things in a 911, but I still have to mention the consumption. Porsche advertises an average of 9.6 l/100 km. In sporty driving it can easily go up to more than 15 l/100 km, especially with the roof open. But at a normal motorway or highway pace, the 911 Targa makes do with 11 l/100 km. Between the intoxicating character of the engine, its performance and its low fuel consumption (let's put it in relative terms, in its segment and given its performance) we have further proof, if proof were still needed, of Porsche's immense know-how as a motorist. 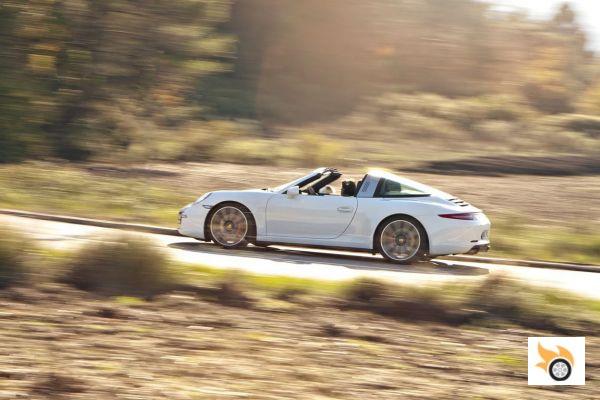 Entering corners, the Targa is more sluggish than its siblings.

In terms of performance, it's not the sportiest model in the range, but even so, its handling is sure to bring a smile to your face. The important thing is not to ask too much of it. The Targa is based on the 991 Cabrio and shares its higher centre of gravity, overweight and softer suspension to maintain comfort. The result of this tuning is a somewhat sluggish behavior: the front end is not as incisive as in the coupe and the rear axle does not flinch, as long as we have not selected the Sport position for the active suspensions and the road is not perfectly asphalted. In this case, the micro-bouncing of the wheels causes the rear axle to lose some traction (under normal conditions, the rear axle always has priority). Moral of the story, the system sends more torque than it should to the front axle to compensate and the 911 Targa then tends to understeer slightly. Yes, I'm shocked too. 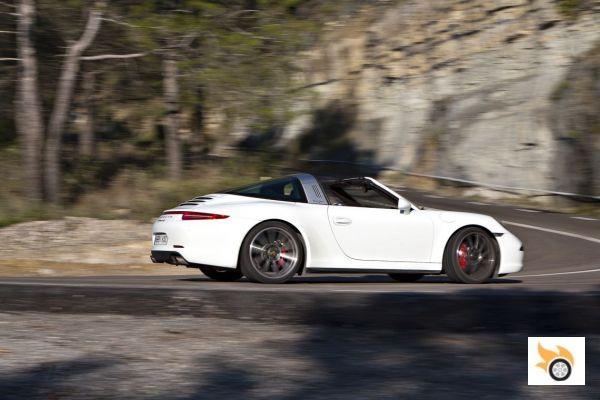 However, on good tarmac or on a track, the Sport mode manages the suspension compressions and extensions much better than the Normal mode. The Targa is a 911 again: it turns flat, the steering is very direct, precise and communicative, the traction is immense and the rear helps to turn if we load well -without overdoing it- the front axle when braking. If you also equip the PTV (Porsche Torque Vectoring) that sends more torque to the outside wheels, the cornering speeds are as amazing as in any other 991 4S. It's only in abrupt changes of body roll that the Targa's overweight and higher centre of gravity are clearly evident. 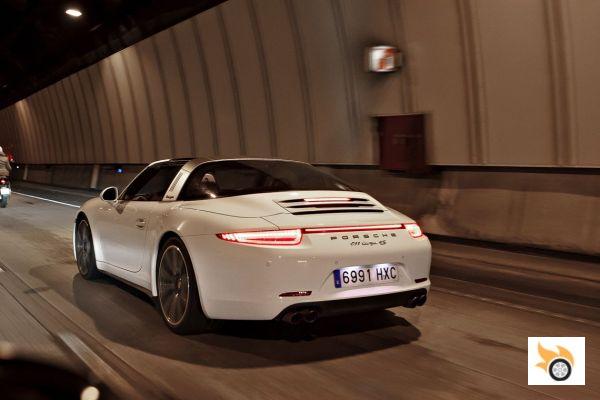 All these sensations are actually nuances because when testing it, one can't help but compare it to the Carrera 4S. And that's when the Targa seems slightly inferior to the Carrera 4S. However, if we don't compare it with its range brothers, the 911 Targa is still an authentic 991 with all the qualities that make the 911 a reference of dynamic behavior a thousand times attacked and never surpassed. There is no reason to see the Targa as an "inferior" 911 and incapable of being sporty, as some porschistas see it. It's their loss. Besides, it has the immense merit of bringing back to life, even if only in this generation, a mythical bodywork that marked a whole era of motoring.