The main goal during the development phase of the new model was to create a modern luxury object that would exceed the expectations of our customers. According to BMW, modern luxury is based on state-of-the-art technologies and a special attention to detail.

Why is that? Well, because of the way the people at BMW refer to the car, defining it as a "luxury object", and having developed the whole project around that premise. And when you ask for six figures for a car, you are not looking to create a simple means of transport, because for that there are already great machines, but it is about creating a piece of luxury for the wealthiest pockets, able to please not only for what it is, but for the fact of being "something luxurious".

Everything is new in the 7 Series, but you have to start your analysis somewhere, and it's going to be with the design. Two generations ago, Chris Bangle created the rarest 7 Series ever. He broke with everything known and created a bizarre aesthetic that was liked by some and disliked by others. 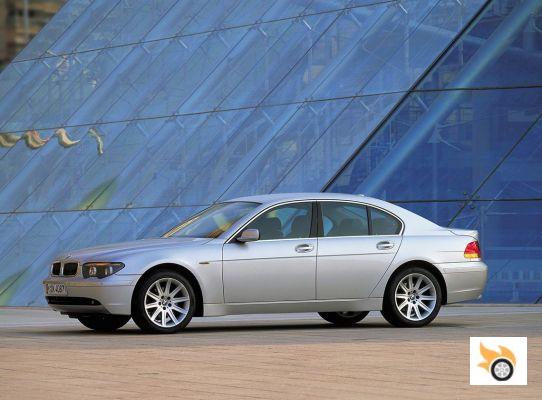 Bangle's design (main photo) was a rupturism difficult to accept for a certain number of customers.

The technological level of the car was not debatable, but the format of the headlights, the curves of the bodywork, the boot lid... there were many things that a good number of customers did not quite fit, as the car seemed to be... fat?

When 2008 saw the succession with a new generation, BMW broke with many of those aesthetic issues, but not all of them. The headlights retained the Bangle-era large teardrop shape (in keeping with the 5 Series), the taillights were rather tall, and the car still didn't exude that halo of Germanic dynamism that the 7 Series usually, or used to. 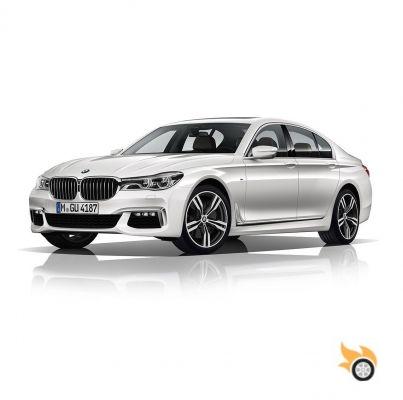 We had to wait for the launch of this new installment in 2015, the G11-G12, to finally see the aesthetic obesity problem solved. Starting with the front end, BMW has followed its latest trends of making the two kidney grille grow vertically. The previous 7 Series already had them quite large, after breaking the horizontal boundary of the bumper, but now they gain even more presence and importance.

The headlights bite into the grille and become much more horizontal, with a more aggressive look, incorporating LED technology as standard, and optionally, laser technology. 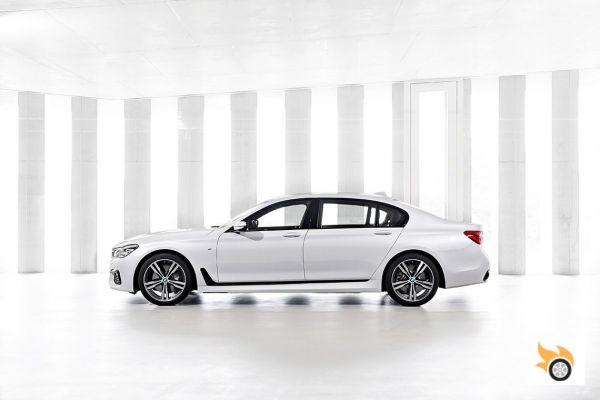 The shape of the intakes, real and false, of the front bumper also seeks that horizontality that, in the end and in the end, make the car look wider and lower when it is in front.

The side view shows a greater wedging forward, marked by the styling line that connects rear lights with headlights and is parallel to the cut of the waist. The side surface of the doors is free of unnecessary trim, giving it a solid presence, which is visually unburdened by a decorative chrome appliqué just above the side skirts, which starts at an air outlet in the front wing and dies when the rear door ends. The "elbow" in the shape of the tailgate window is retained, like a good BMW. 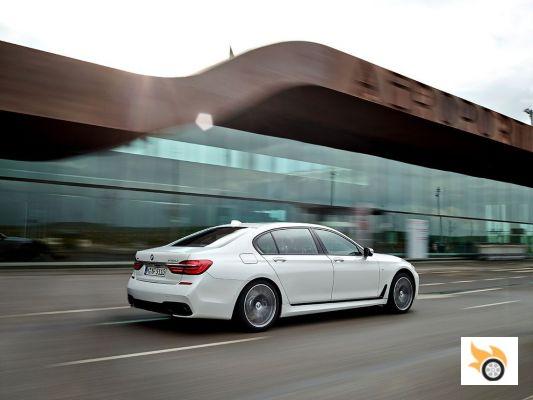 Turning to the rear three-quarters we find a trunk lid better integrated than in the last two generations, continuing with a fairly progressive C-pillar and a rear truncated in a certain diagonal. The rear is presided over by optical groups in "L" typical of BMW, but wider and less high than in past generations, which achieves the same desired effect that is achieved in the front of the car: it seems lower, wider and planted on the asphalt.


With the optional "eme" aerodynamic package (no M7, at least for now), the car gains a certain brutalist touch, with more pronounced air intakes, with chrome replaced by contrasting color accents, and larger wheels. Sporty? Yes, it has a touch, although when a car is as big as this one is, imagining it cornering on a mountain pass is as strange as imagining an elephant running the 110m hurdles at the Olympics.

The cabin has the design of all BMWs, for better or worse. Great ergonomics, I won't argue with that. I won't argue about the design either. But it's clear that riding in a 1 Series has the same taste and aftertaste as in a 7 Series. For some that will speak of "brand identity", corporate spirit, and good solutions that can be transferred from one segment to another without losing the best of them. For others it will lack a touch of risk, distinction and design in the interior, an aspect in which firms like Jaguar play a little more "hard". 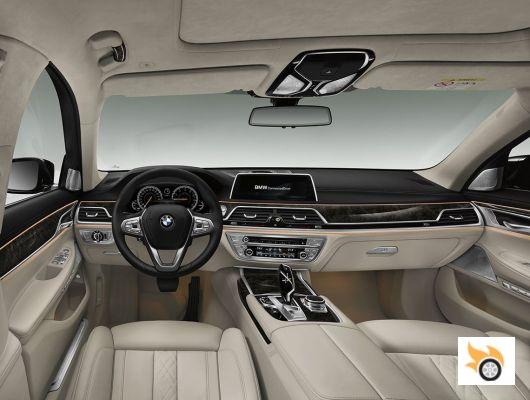 BMW speaks of luxury finishes and materials. Without touching them and see it live, you can not judge anything (although there are those who dare to do so "just because", press release in hand). Numerous new technologies are used in the infotainment equipment, such as gesture commands detected by a three-dimensional sensor (what will be the result of combing your hair? because we all know that if you say stupid things to SIRI...). Almost everything you can touch can be heated and/or ventilated, such as seats, steering wheel and armrests, both front and rear. There's also massage space in the seats, and a centre console that can extend from front to back, turning the car into a strict four-seater luxury. 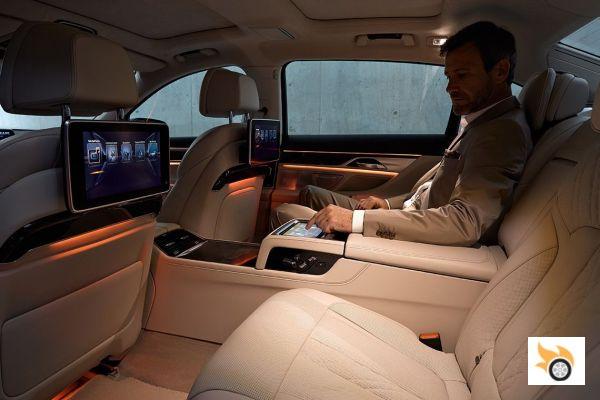 The roof has the option to become a configurable light show, while the four-zone climate control has a fully touch-sensitive operating device. Screens everywhere as an option, an LED lighting system and almost infinite choice of carpets, upholstery and trim open up the universe of the new 7 Series environment to the tastes of the customer... the customer who can afford it, of course.

But as a good German car, it's not all about attention to detail and aesthetic innovations. The 7 Series is a technological showcase of what BMW is capable of doing in a car, to create the best sedan representation of the world, in his opinion, of course, with a certain dynamic touch. 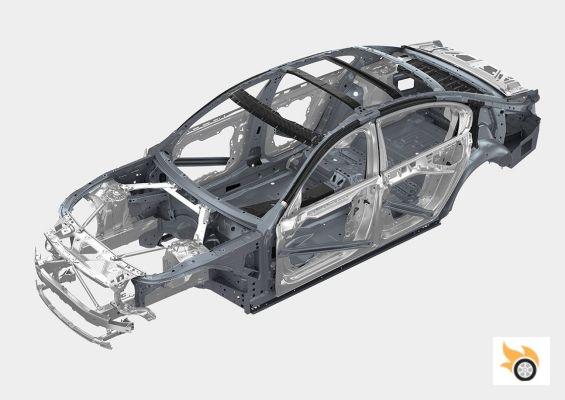 To do this it has a monocoque where steel, aluminum alloys, and as a novelty, carbon fiber as a structural element. The combination of all these materials, each applied where it is most convenient, allows the new 7 Series to reduce its weight by up to 130 kilograms (depending on engine and equipment), despite having increased torsional rigidity and bending.

Conceptually, the car retains the attributes familiar from past generations, with double wishbone front suspension and five-link multi-link rear suspension. The important thing here is that the suspension is pneumatic as standard (so that Citroën can say that pneumatics are old-fashioned and offer no advantages), with active height control and different hardness and damping programs to adapt to road conditions and the driver's wishes. The car can integrate a bump pre-visualization system to adapt to bumps (like Mercedes-Benz in its S-Class), while pro-actively responding to what's coming your way by reading upcoming curves on the navigator and adjusting the suspension accordingly. 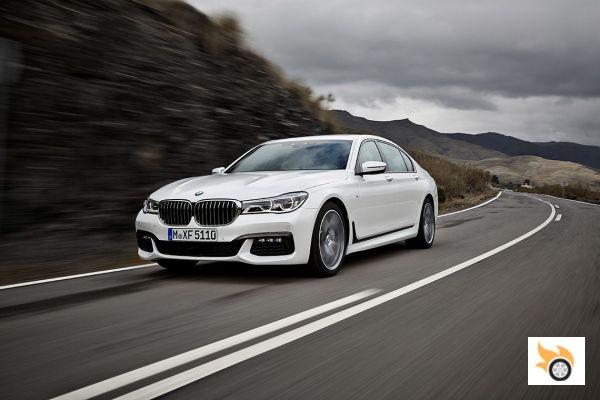 It's not the only thing that adjusts to the road. The eight-speed automatic gearbox also adapts its behaviour to the curves in the road, making it a more useful system. The drive system can be exclusively rear-wheel drive or "xDrive" all-wheel drive.

As for the mechanical offer, BMW articulates everything around a single diesel engine, two gasoline, and a plug-in hybrid variant of gasoline. 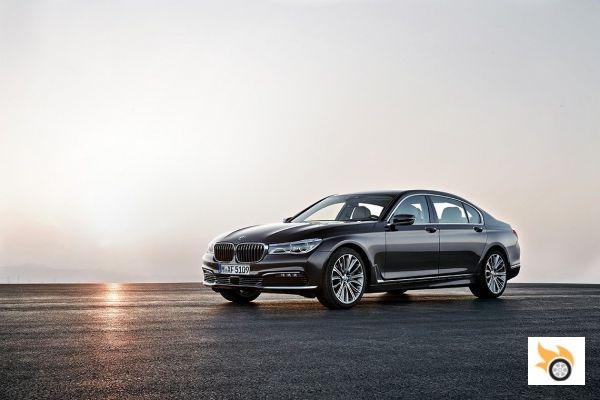 The plug-in hybrid is called the 740e, does 0-60 in 5.6 seconds, has 326 horsepower in total (it uses a two-liter four-cylinder combustion engine supported by an electric motor), gets an incredible average fuel consumption of 2.1 liters per 100 km, and is capable of driving up to 40 km in pure electric mode.

Of course, with all the bad news on this front, the 7 Series is equipped with a thousand and one driving aids. From the active lane keeping assistance to adaptive cruise control, sign reading, a huge head up display (HUD), blind spot warning, automated braking to avoid collisions, radar to avoid collisions and prevent collisions... 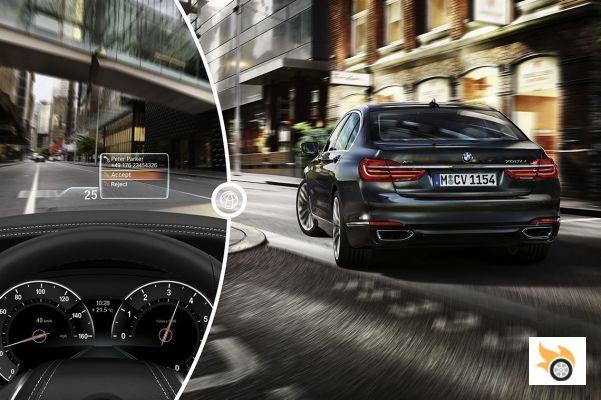 But the most interesting feature is the autopilot for driving in traffic jams at low speed. The car, for its level of technology and installed equipment, could well be driven alone on the motorway, but for legal reasons, as with many other cars, it will not yet be possible to do so.

What can be done, as long as it can by law, is to park and un-park using the intelligent key-remote control, a key that also, as in the i8, will serve for many other actions.

A price to match the circumstances

At the moment we don't have an official price list, but we're sure it won't go much further than where the current range started, with the 730d at almost 95,000 euros. Considering the technological and equipment gains, it is clear that the end customer who can afford the luxury, will have access to more content for the same money.

Another issue is how customers will respond to this new 7 Series compared to its rivals. The S-Class has hit the table hard since its market breakthrough, and the 7 Series needed a change of direction from the Bangle era, which hadn't happened in 2008. With this aesthetic paradigm shift, the integration of carbon fiber and improved technological equipment, it is now in a better position than ever to eat market to the star car. 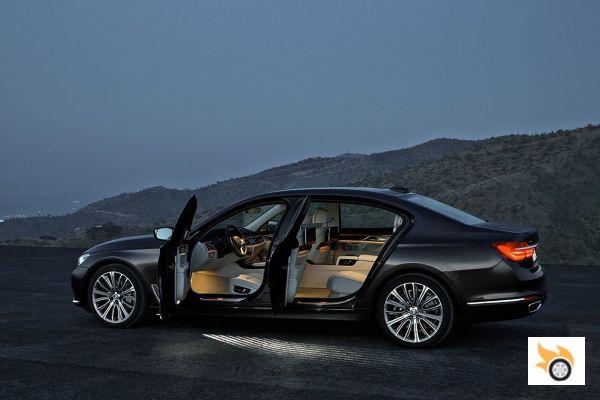 And the Audi A8? In this fight has always played as "outsider", and it seems that, although there is a new generation to come, will remain a minority option, in a market that is not designed for large volumes. At the end of the day we are dealing with luxury limousines designed to attract both wealthy customers and to give luster to the brands with all its technological arsenal.