It doesn't have to snow, cold weather hardens the rubber and degrades performance.

When there is a greater variation in temperatures, it is more difficult to choose the right tyres, because they will do well in some conditions, and perform worse in the opposite conditions. That's where all-season tyres come in, they have an acceptable compromise and avoid having two sets of tyres. I have yet to try ones that are fully satisfactory on a touring car, and I don't think highly of them. When Michelin announced a summer tyre that performed well in winter use - with winter certification, mind you - the first thing that crossed my mind was that I'd have to see it to believe it.

When I read the first tests of colleagues in the sector, giving very good opinion of them in winter conditions, my curiosity began to bite me. I'm one of those Spaniards who wake up in the cold in the mountains - not too cold, but less than 7 degrees - and who move in a peripheral area with great thermal variation, and who prefers not to have to keep another four wheels half the year at home or in a warehouse. I've never put chains on, nor do I feel like it, and where I live it can snow a few days a year. My other car, a sports car, has a set for every season, in winter I don't dispute the effectiveness of the winter ones, and I vehemently recommend them. 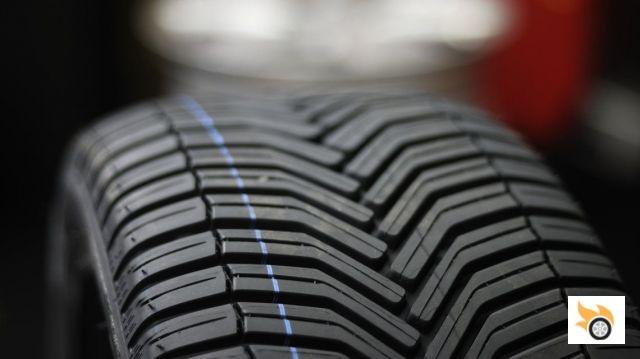 Hence I've started a long term test of the Michelin CrossClimate, to test those goodness in conditions of use totally uncontrolled by the manufacturer. They are advertised as "the first Michelin summer tyre with winter certification", with the three snowy peaks (3PMSF) badge. The tires I was using on my car were nearing the end of their useful life, and although they were legally compliant, I had a good scare with plenty of rain and a bit of a rush, and decided to replace them with these.


I retired a front set of Pirelli PZero Nero, excessive for a car like the Prius (136 hp) and with a Y speed code (>300 km / h), absurd for a car that does not pass 180 km / h or downhill (electronically limited). On the rear axle, the Goodyear EfficientGrip were on their way to 100,000 km without being changed, and had done me an excellent service in four years. With a tread depth of about 3 mm on all four tires, I retired the Pirelli's with over 26,000 km, and the Goodyear's with almost 92,000 km. If I pushed them harder, they might have reached 30,000/100,000 km respectively.

With that tread depth there is already a significant risk of aquaplaning at more than 90 km/h, and I can attest to this as a Christian. The legal minimum is 1.6 mm

For the standard size of 215/45 R17 there are no references, so I had to look for a compatible size. Finally I opted for the 225/45 R17, the biggest size available, with efficiency category "C", wet grip "A" and a noise level of 69 decibels. The load (94) and speed (W) ratings are plenty for my car, so I won't have any problems with them at the MOT. Too wide for a Prius? Not for the way I drive sometimes... The "Petrol Heads" stickers are not for decoration... 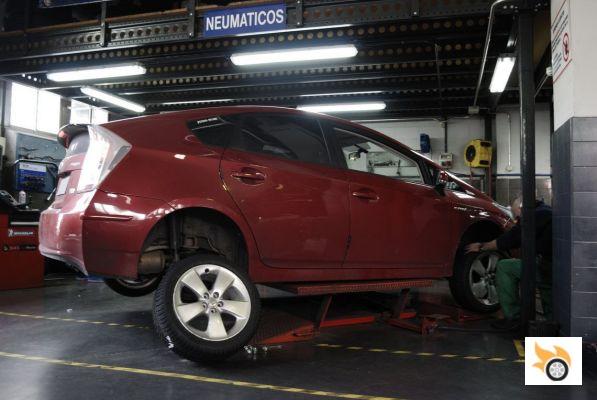 Once the wheels were changed in a garage in Madrid, I said goodbye to my four used tyres, which fortunately didn't burn in Seseña. To be honest, I liked their tread more, the CrossClimate have a very aggressive wedge design, which reminds me of the rear wheels of agricultural tractors; it only lacks a petrol engine and the tow ball. Michelin claims - with data from DEKRA and TÜV SÜD - that this tread pattern guarantees good performance in dry and snowy conditions, without affecting the tire's durability. I already have the reference that more than 50,000 km on the front axle is a good duration, what the EfficientGrip lasted, and that's with a lot of use.


We'll see how long these last, I'll know in two years and a bit with an annual mileage of more than 20,000 km.

The first impressions when riding with these tyres were a small improvement in comfort and a little less noise. The front Pirelli were already five years old, although they have been stored for three years in bags and without sunlight, they should not suffer from rubber hardening. Of course the car became a bit quieter, there is a difference of 3 dB in homologation (72 dB). The ex-rear, the Goodyear, are even quieter, 66 dB. I'd be lying if I said I found the rear axle quieter, I don't usually ride as a passenger in my own car.

As for fuel consumption, the Pirelli's are rated "E", and the Goodyear's are rated "B". Considering that the Michelins are "C" on both axles, I have to experience an improvement if the European labelling has a minimum of scientific rigour. Of course the preliminary experience has been very positive in that sense, and it has been noticed. At the same condition of the car and use of the previous combination of tires, consumption has been reduced by 9% after 2,300 kilometers. My Prius is gasified, it has gone from guzzling 6.6 l/100 km of LPG to 6.06 l/100 km. At current gas prices, that's less than 4 euros per 100 km, although at the price at which I refuel I've gone below 3 euros. 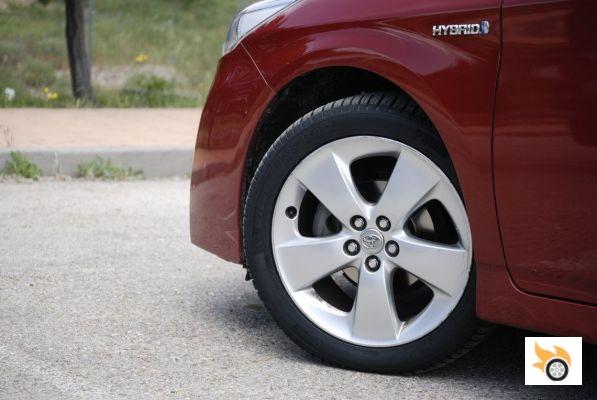 
To be honest, my car has an "ecotuning" that lowers the fuel consumption by 0.4 l/100 km, a variable radiator capping, so I'm exactly in the average adjusting calculations. Another way of looking at it, the use of these tyres doesn't penalize consumption, which would happen using winter tyres all year round. Anyway, I insist that these data are preliminary, the car has to move all year round, because at this time it is normal to spend less fuel. Anyone can follow the evolution of the test in my Spritmonitor account.

Leaving aside the consumption issue, having driven with them mainly in dry conditions, I have not noticed a decrease in performance in terms of grip or braking, and that considering that the brake pads are the factory ones and have never been changed, with almost 150,000 kilometers. And they will last even longer if I take care of them a little bit, I haven't been told at the check-ups that it's time to change them yet. 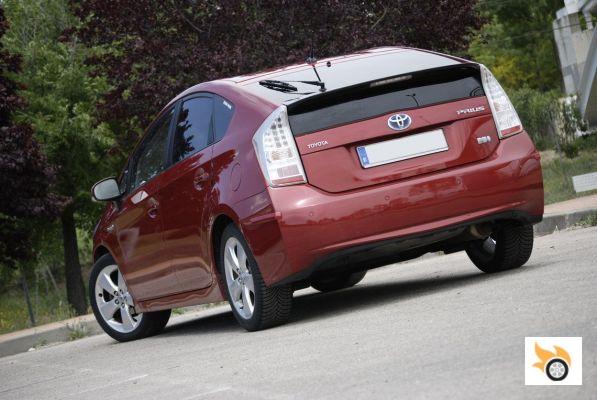 The only relevant difference I've noticed is that when the car is leaning on a curve, and it doesn't have to be a very aggressive line, there is a very slight sound, medium frequency, which disappears as soon as the steering goes straight. In a noisier car that sound might go unnoticed, but a car that can run with the engine off allows you to notice these things more. It's a way of saying that the shoulders are working. I noticed something similar driving the all-wheel-drive Saab 9-3 XWD.

If you look closely at the shoulders, they have a laminate meant to nibble at the snow, but at the same time, the lugs are contoured diagonally, not square, to make them less noisy. A winter tire is a bit noisier precisely because of the aggressive tread pattern. In addition, Michelin says that this facilitates effective dry braking. I haven't yet had to brake hard enough to appreciate that. 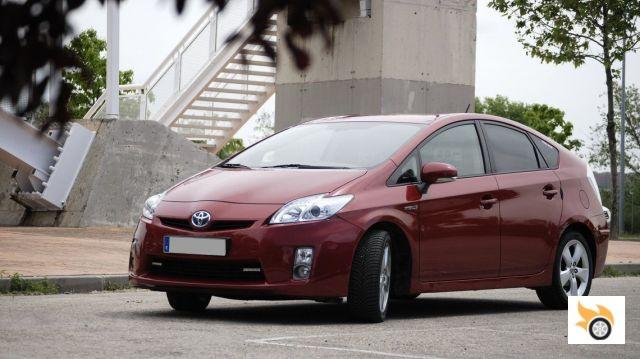 So far there is only one incident to highlight, and that is that I suffered a puncture in the right rear while riding in Madrid. I don't know at what point I got on top of a double clamp, and the car started to lose height when I was parked. I decided to change the wheel immediately and not to drive with the punctured one, so as not to damage it. I was able to get it fixed at a Euromaster garage after paying 5 euros, which my insurance company did. There was no structural damage, so I had no problems.

In the following parts of the test I'll comment on their behaviour in the wet, when the weather gets worse, they should be fine according to the "A" of their European labelling. Months later, I'll tell you my impressions in winter use, and if I don't get a snowfall, I'll go for it, as I've done before. Technically speaking they are winter tyres for the DGT, so if chains are required, I can ride with them perfectly well. Pending further verification, they seem like the ideal tyres for someone who has the same commuting pattern as the writer of these lines.

Before I say goodbye, a couple of notes. With summer tyres I managed to start the car on a slight slope on a slab of ice -with little inclination- thanks to the magic of the electric motor, which doses the torque perfectly and doesn't make the wheels slip. On the other hand, the Prius of this generation does not have traction control disconnection, so I will depend exclusively on the efficiency of the tyres if I have any problems. As we saw in a previous article, it is preferable to disconnect this assistance when driving on snow, so that the tires are more effective (if they have the right tread and type, of course). 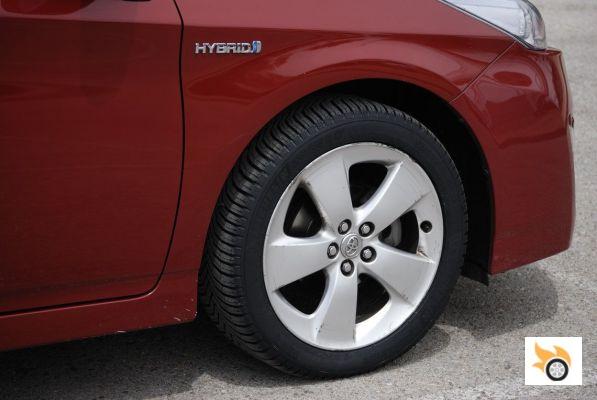 NOTE: Michelin has taken care of the cost of the tyres, as well as the fitting.

add a comment from Michelin CrossClimate, a long-lasting test (part 1)