How does the anti-lag system of rally turbo engines work?

The first thing to understand is what lag is. In supercharged engines, when the rider presses the throttle hard, the engine does not respond in a linear fashion to his demand for "more power". Instead, what it does is gain some torque as the exhaust gas flows accelerate. When these reach a critical speed to effectively push the turbocharger, the engine suddenly delivers a sudden dose of "extra" torque.

The time that elapses between demanding more power and receiving that "kick" is called "lag".

The lag comes from the inertias of the turbocharger system. As you probably know by now, the turbocharger uses the energy of the combustion gases coming out of the exhaust manifold to turn a turbine. This turbine is associated with another turbine, which compresses the air entering the engine intake.

Because these two turbines have a not inconsiderable mass, accelerating and braking them is not a matter of milliseconds. In addition, they have an optimum operating zone, below which they offer no effective "boost pressure".

In other words, when the turbocharger turbine is spinning at low rpm, it is not able to compress the air in the intake manifold. As the engine is designed to work as a turbo, the effective compression ratio in the combustion chamber, when the turbo is not blowing, is too low, and therefore it is not possible to inject gasoline at full throttle, nor to obtain large doses of power.

When the rider presses hard on the throttle, a chain effect starts: the throttle butterfly opens and the amount of air and fuel entering the engine increases. With more air and fuel, the exhaust gases and their energy are increased, so they drive the turbocharger turbine a little faster. This compresses the intake air a little more, which generates more air flow into the combustion chamber, more power, more energy in the exhaust gases, which drives the compressor turbine even more... And so on and so forth until that critical turbo speed is reached that manages to respond to the driver's demand.


For a driver, being able to manage "to the millimetre" with the right foot the engine response in terms of torque sent to the wheels is vital to be able to manage the yaw of the car with respect to the curves, to drop the rear at will, or to correct lines.

This chain effect means that the driver has to step on the accelerator up to two seconds before needing the torque at the wheels, anticipating what's ahead, to eliminate the time lost due to lag, while the turbocharger is loaded.

The first step to improve engine response was to reduce the size of the turbochargers to reduce inertia. It was also possible to play with twin-entry turbochargers, or even with variable geometry, to be able to respond better throughout the rev range.

But it was in 1994 when, in the rally world championship, "the great perfect solution" was achieved, by introducing the "bang-bang", the anti-lag system, to eliminate the response time.

How does it work?

With the antilag system, the compressed air from the intake turbine is bypassed directly to the exhaust manifold. At the same time, even though the driver has stopped accelerating, the intake throttle remains open (by 15 to 20%), as if the driver had held the throttle down. 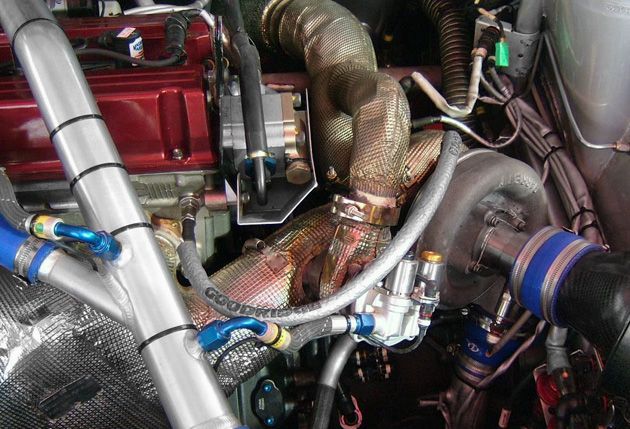 But the engine's electronic control unit modifies the engine management. What it does is to delay the spark plug ignition point as much as possible. Thus, when the engine piston is already in its expansion stroke is when the mixture is set on fire. This causes the vast majority of the energy from that combustion to be propelled through the cylinder on the exhaust stroke, which sends the burning mixture and all that energy to the gas turbine. In addition, those gases are mixed with the high-pressure air coming into the exhaust manifold from the intake turbine.

In this way, the turbo still has energy in the form of high-speed, high-temperature exhaust gases, so it continues to compress air at high pressure.

In 1994 the anti-lag system started to be used on WRC stages.

In a way, this antilag system is equivalent to using the turbocharger as a thermal turbomachine similar to an aircraft engine.

As the pressure generated by the turbocharger for the clean air remains high, when the rider presses the throttle, the bypass valve cuts off the flow of compressed air to the exhaust manifold, and switches to offering it back to the intake lung, generating manifold pressure there almost instantaneously.

This solution reduces lag to the point where it is imperceptible to the driver. It is only thanks to the refinement of the electronic engine management and the valves that manage the turbocharger's air flows that we have been able to reach this situation, with very fine engines despite using this operating principle.


But why isn't it used in road cars?

It's not a system to mount on your street car.

There are several good reasons why these anti-lag systems are not a good idea in a road car. The first reason is that fuel is still burned when the engine is in idle, so the fuel consumption of such an engine is much, much higher than that of a conventional engine.

The second reason is that burning gases in the exhaust manifold rather than in the combustion chamber generates enormous thermal stress on the turbocharger's gas turbine, which negatively impacts its reliability. Making such a system reliable for the street would be very complex.

The third reason is that pollutant emissions are increased, as burning fuel outside the optimal point of the compression stroke is inefficient.

And the fourth reason is that, for street cars, which use smaller diameter turbochargers, with double inlet, and with the possibility (in the case of turbochargers and some specific petrol engines) of using variable geometry, this system would be redundant.

Unfortunately, the FIA banned the experimentation of variable geometry turbines which would probably have made these anti-lag systems redundant in the "world" 1.6 litre engine used in the WRC, in the WTCC, and has also banned it for future F1 engines. Thus, the benefits for road cars that could be achieved by the development of variable geometry turbines for petrol engines will not be consolidated in competition. FIA stuff.

The good news is that F1's electric motor coupled turbos will be able to work to eliminate lag without resorting to bang-bang anti-lag systems, and this solution could be applied to road cars. But we'll talk about this another day.

Report originally published in December 2013, rescued for Pistonudos.
Vintage cars, classics, junk heaps or all at once? ❯

add a comment of How does the anti-lag system of rally turbo engines work?