Interestingly, just a week ago, this Lincoln Indianapolis was back in the spotlight: it was one of the star models (along with a 1962 Ferrari 400 GT Superamerica SWB Cabrio) in the Andrews Collection that RM Auctions/Sothby's put up for auction in Fort Worth, Texas. Here's the story of this curious concept car. 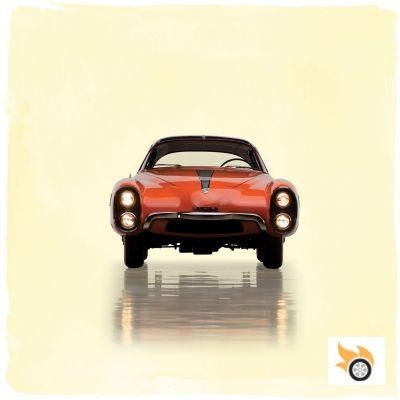 On his deathbed in 1944, Giacinto Ghia asked his wife to call Felice Mario Boano to save the company. Without Boano's design talent and management skills, Ghia would not have survived to become one of Italy's great post-war carrozzeria companies. And that was nothing new for him. As early as the 1930s, Boano created some of the best designs for Farina, Castagna, Ghia, Viotti and Bertone. At that time, the name on the cars was already that of the carrozzeria and not the designer.

Boano accepted the challenge to save the company. Together with Luigi Segre, a partner in the company, they made Ghia one of the great names in Italian design in the 1950s. However, in 1953, Boano could no longer stand his partner Segre and left. He sold his share of the company to Segre and, after so many years designing for others, set up his own company.

Interestingly, one of Boano's first clients was Battista Pinin Farina. Pinin Farina (whose surname would not become Pininfarina until 1961) left Stabilimenti Industriali Farina, his brother Giovanni's company, in 1930. At that time, Boano was one of those chosen to follow him in his new business venture. Pinin Farina returned the favour in 1956 when he commissioned Boano - now independent - to create a bodywork for the Ferrari 250 Europa GT. Presented as a styling exercise at the 1956 Geneva Motor Show, the 250 GT Boano was so successful that it had to be mass produced. And since Pinin Farina couldn't keep up with the demand, it was Boano who took over production. 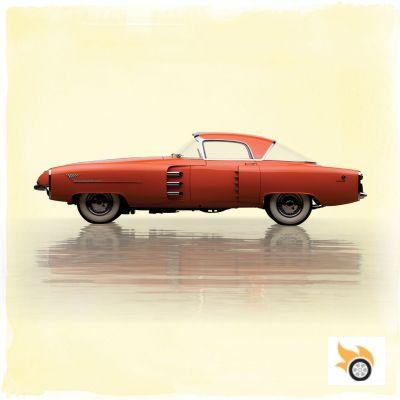 Boano's experience and business acumen were recognised by all when he began to teach his son Gian Paolo the trade. After graduating from the Liceo Artistico, he became an apprentice in his father's company where he perfected his skills and acquired experience as a craftsman. Many of Gian Paolo's ideas had obvious characteristics of the American design of the time, although they were softened and refined with the elegance and instinct that always characterized Italian design. It was not surprising, therefore, that Boano made his son a permanent collaborator in the family business.

A bridge between Detroit and Turin

After the Second World War, Henry Ford II took control of the Ford Motor Company and began to get personally involved in new projects in order to bring the company into the modern era. His interest in European design was no secret and many Italian coachbuilders dreamed of being able to work for and secure a lucrative contract with the giant Ford. Boano was no exception, but unlike the others he had a secret weapon: his son had a friend working at the top of Ford.

By all accounts, Cuccio (Gian Paolo's friend), assured them that if Boano could create a spectacular, exciting and futuristic design based on a Ford Motor Company chassis, he would liaise between Boano and the Ford management. Boano agreed, got his hands on a Lincoln chassis and gave it to his son. His son quickly set to work to have the car ready for the 1955 Turin show. 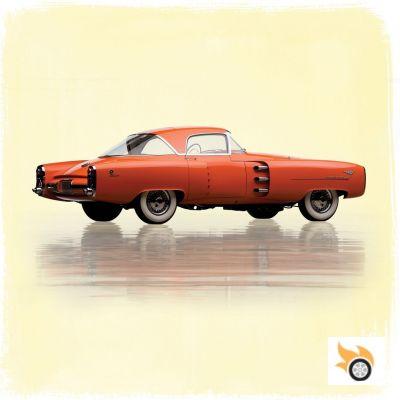 The Indianapolis was a typical Italian carrozzeria project. It all started as simple sketches on a blank sheet of paper and then gradually took shape on the chassis as the body panels were shaped.

Boano gave it a prominent front end, with no apparent radiator grille - radiator cooling is provided by a simple opening under the bumper - and flanked by two imposing fins and two vertical headlights each. The front wings end almost at the doors with their false exhaust tails.

At the rear, the rear wings, which start at the doors, echo the front wings, with false air intakes, but with two functional exhaust tails. The tail lights in turn act visually like the flame of a jet engine.

Curiously, and contrary to what was in vogue at the time, especially on Detroit cars, the Indianapolis does not abuse chrome. Obviously, the "exhausts" and air intakes are chrome, as well as the bumpers and window frames, but apart from those elements (they could not be done otherwise in the 50's) in the whole car there is only a small chrome line in the front wing where the name of the car sits and finished by a checkered flag. The influence of Italian styling is certainly noticeable here: without the attention-grabbing chrome, your eye can follow the lines of the car and appreciate it as a whole without getting stuck on a detail.

The Lincoln Indianapolis brings together the best of both '50s styles: the aeronautical exuberance of Detroit and the elegance of Italian carrozzeria.

The cockpit is representative of what was worn on the other side of the Atlantic at that time with a wraparound windshield and a vertical A-pillar. Boano also applied this idea to the wraparound rear window. For this, the B-pillar remains vertical, but the C-pillar is inverted and starts from the base of the B-pillar. As a result we get the feeling that this is the hard-top of a cabrio and not a real coupe. It is a design that we would also see in the hard-top of the Mercedes 190 SL, for example.


In the cabin, or rather cockpit, Gian Paolo Boano kept the idea of aviation. Despite its dimensions and the space available, the Lincoln Indianapolis is a two-seater, like a fighter-bomber. The two seats are separated by an imposing armrest. The black and white leather upholstery contrasts with the dashboard that surrounds the passenger compartment and its orange color. The central part of the dashboard hides a whole series of instruments and the radio behind a panel. The hatch opens only when necessary to offer a refined and elegant interior. 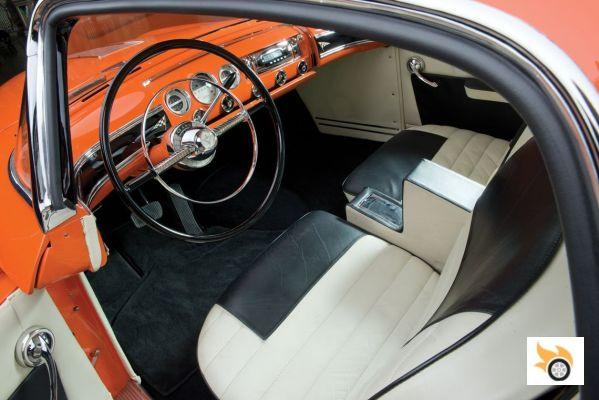 Underneath this sculptural masterpiece is a classic Lincoln center-beam chassis with independent front suspension with coil springs and a rigid rear axle with leaf springs. The engine is a 341 cu (5.6-liter) Lincoln V8 that, fed by a simple four-barrel carburetor, puts out 255 hp. It is paired with a 4-ratio automatic transmission. 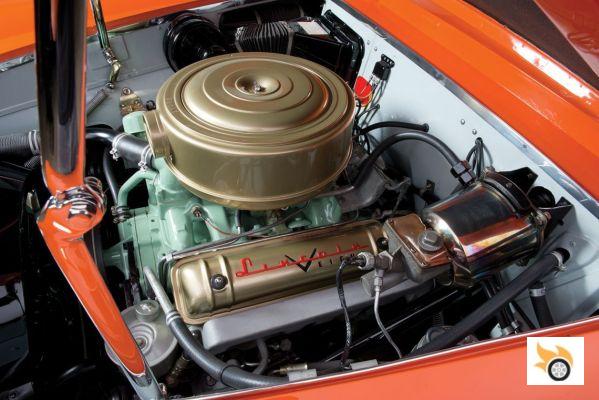 And so Fiat's Centro Stile was born

When the 1955 Turin Motor Show opened its doors, the Lincoln Indianapolis instantly became one of the stars of the Italian show. Auto Age magazine dedicated its November 1955 cover to it, wondering if this would be the future Lincoln. Since Ford didn't know anything about this car, the guys at Auto Age figured they didn't really want to give them any information.

Obviously, Ford got wind of the project and by the time the Turin show closed its doors, Ford had purchased the Indianapolis for Henry Ford II himself. Soon after, Ford offered a 10-year exclusive contract to the Boanos to take over the entire design for the Ford Motor Company. Mario Felice Boano let Fiat know about the offer he had received. Seeing that the enemy could take a valuable asset, Fiat made a counteroffer. The Boanos would create the Centro Stile and would be the directors. The Boanos turned down Ford's offer and went on to run Fiat's first in-house design department for decades. Needless to say, the Centro Stile is still very active today.

Boano turned down Ford's offer and went on to set up the design department at Fiat.

After all that turmoil between two giants of the industry (in the 1950s, Toyota was making its debut and Volkswagen was preparing, ironically, to conquer the world with the Beetle - a car desired by a monster that wanted to bring the world to its feet), the Indianapolis seemed to have disappeared.

Once Henry Ford II took delivery of the car, little was heard of the Indianapolis again. Some persistently maintain that Henry Ford gave the car to his friend Erol Flynn, but even respected historian Beverly Rae Kimes, who wrote everything there is to know about the Lincoln Indianapolis, found no evidence that this was the case; she could only find circumstantial evidence.

In the late 1950s, the car turned up in Boston with the interior quite deteriorated and in the early 1960s, Felix Duclos, from New hampshire, bought the car in Boston. He kept it as is until 1972 when he sold it. It changed owners several times, always on the East coast of the USA, until it was bought by collector Thomas Kerr. He commissioned the renowned Jim Cox to completely restore the car to "the way Gian Paolo Boano would have done it in 1955, if he had had the time". In other words, he commissioned "a Yankee restoration", as they say in the classic car world. For the neophytes, it means that the car is better than when it was presented at the Turin show in 1955. It's fine for driving, photos and concours d'elegance, but the historical value is drowned under the many layers of paint and varnish that the car never had in its day... 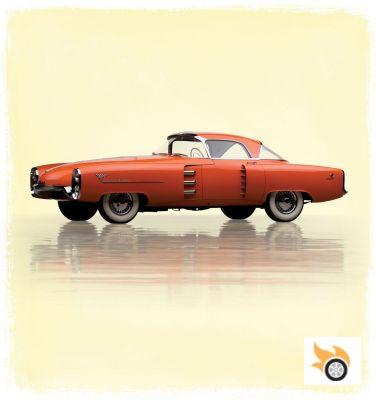 After winning several awards at concours d'elegance, such as at Pebble Beach in 2001 and Amelia Island in 2003, the car fell into the Andrews' collection. These returned to present the car at various events, such as Pebble Beach where it won the award for best Lincoln in 2013. Now, since May 2, the Lincoln Indianapolis has a new owner. Who after paying the 1,210,000 dollars that reached the bidding, wishes to remain anonymous. It is likely to stay in the United States, because there it is considered a jewel: it is the classic American aeronautical design of the 50's with a touch of European elegance that they like so much and gives them prestige. In Europe, it is still unknown, but if it weren't for it, the history of Fiat's Centro Stile would be very different.

add a comment of Lincoln Indianapolis "Exclusive Study by Boano".