For the same reason we decided to ask Fiat for a 500X more similar to the one that, by volume, is having more success in sales, and that's how we ended up with the 4×2 120 hp diesel and manual we have today to tell you about, with a price starting from 20,650€ with the Pop Star finish. 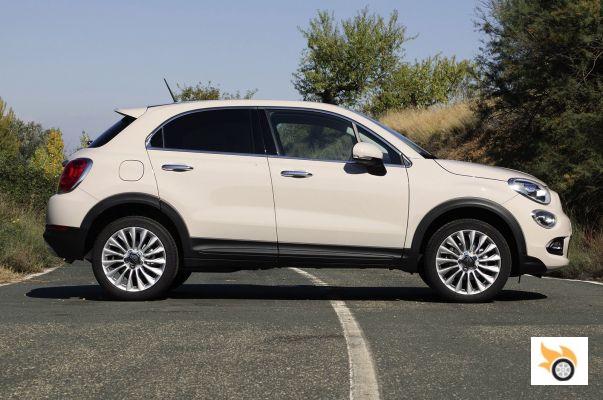 It would not make too much sense to stop now to comment too much on the aesthetics of the 500X. After all, the tested version is the "urban", with differences in bumpers and minor details compared to the "Cross" we tested with all-wheel drive and 140 hp diesel engine.

Since the aesthetics are clearly similar between the two variants, most of the comments we made at the time are still valid, and you can read them here.

In short and taking advantage of the occasion I will tell you that personally I would find it hard to decide between the urban finish or the SUV. The SUV seems to make more sense and logic in a car with these characteristics, but we also like the front bumper of the car that we dissect today.

Be that as it may, it is certainly a very successful car, both in general and at the level of detail, making it one of the best in its segment in terms of appearance, if not the best. Although, of course, to taste are the colors, and the radically different CX-3 also seems to me very successful aesthetically to argue for the place of honor to this Fiat. 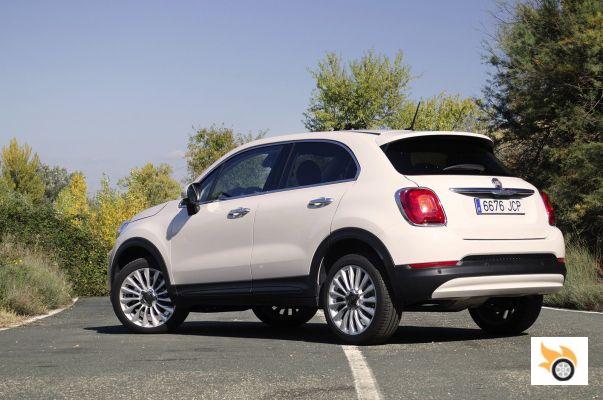 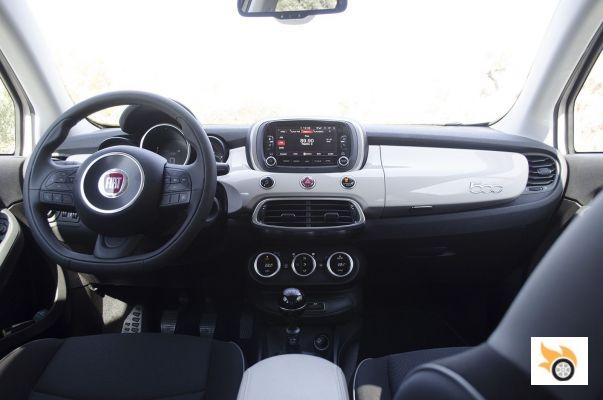 And inside it happens as outside: commented all with the 4×4 there is little to add now. The finish of the versions with "city look", unlike the car tested the other day, does not carry the dashboard in dark gray and rough, but with a strip of body color, something more logical and better, in my opinion, to align with the rest of the 500.

Being able to count on the UConnect system, with full connectivity with the mobile phone and applications is a success that only lacks to solve the visibility in direct light conditions on the screen, something that other brands have better achieved.

The space in the front seats is generous in all directions. The rear seats are generous longitudinally, although in cross-section there are some rivals in the segment that offer more space, so riding three adults (with two will give you the same) may be more comfortable in other cars in the B-SUV segment, but for little, in any case. 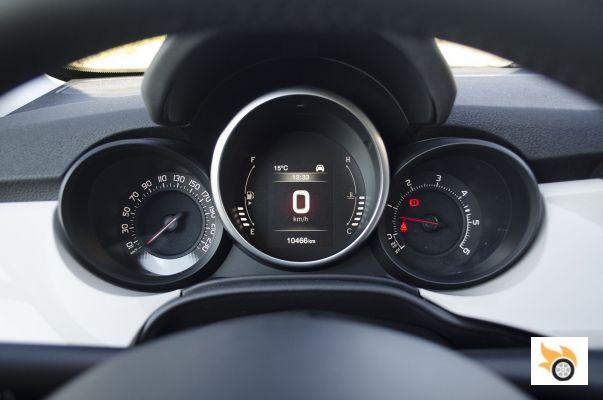 The driving position, as I said with the Cross, is particularly good. FCA has always had some problems to allow all the necessary adjustments in many of its cars to achieve an ergonomically satisfactory position, often forcing you to drive with your legs a bit cramped, or taking the steering wheel somewhat high or more inclined than desired. But this is not the case of the 500X, which finally achieves a position that we could consider perfect, with all the hands within reach in a very intuitive way.


In terms of the quality of materials, finishes and adjustments, the 500X is a very high quality car, to the point of being a reference in the category, also giving you the opportunity to choose multiple finishes and colour combinations so that you can have a car that is practically unique. 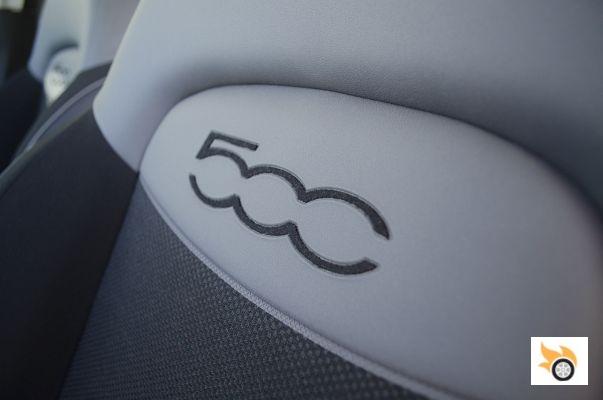 The use of a Beats sound system is another guarantee. And although it doesn't sound as great as I remember the equipment in other FCA cars (the 500L for example, I don't know why), it is still a guarantee of good sound harmonization in the cabin when you have to drive for long periods of time.

The boot, with a capacity of 350 litres, offers more than enough space for a family. Certainly there are rivals with greater capacity, but to put it in perspective, remember that it's the same capacity as FCA's remaining compact on the market, the Giulietta, with the advantage of having a flatter, more comfortable and easier to modulate load area. 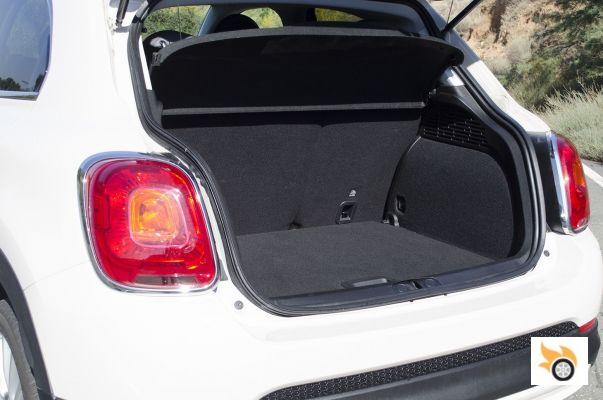 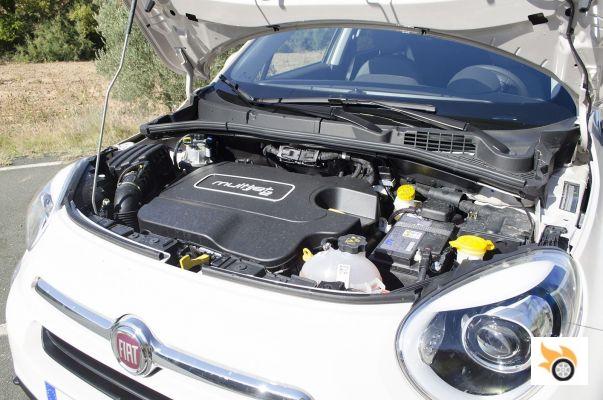 The differences with the four by four in the tested variant are big. Here the engine is a 1.6-litre direct injection diesel, with multiple fuel injections per combustion cycle. The cylinder head is 16-valve, with variable geometry turbocharger.

The gearbox of the unit tested was a six-speed manual. Depending on the engine, the 500X can be ordered with gearboxes that include a 5-speed manual for the entry-level variants (110 petrol, 95 hp diesel), a six-speed manual, a six-speed dual-clutch TCT and a torque converter automatic with nine - yes, nine - ratios.

The good thing about this manual is that it stands out for its smoothness, its precision in the routes, something long, yes, and discards any hint of pasty route that could be perceived in previous models of the company. It also adds front-wheel drive with the function of limiting wheel slip in slippery surface conditions, using the front axle brakes, to offer off-road capabilities somewhat superior to those that would have a conventional compact, but forget about going to trialeras with him, for obvious reasons. 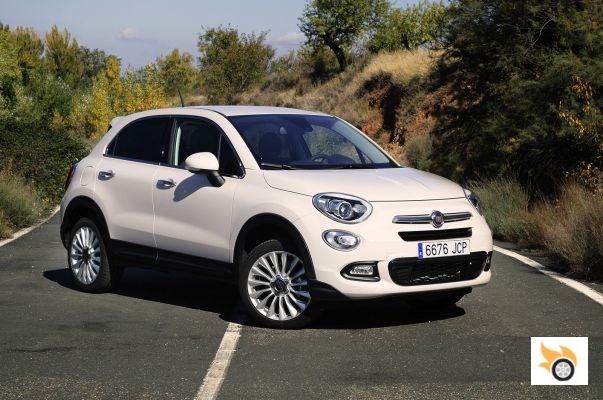 The differences between this version and the one we tested the other day, almost 10.000€ more expensive, had to be noticed, and they are. Interestingly, the engine is not the protagonist of the changes, in any case. This 1.6 120bhp diesel is all about ingenuity. The worst thing it has, by far, is the sound it emits, especially when cold, when starting, very tractor-like.

But once you get past the noise, what impresses you about it is its enormous torque and the flat curve on which it sits, which allows you to accelerate with gusto to overtake with more confidence than you'd expect from a car with 120 horsepower. The 80-120 in eight seconds it's capable of is a demonstration of how all cars on the market should move, at the very least, to ensure safe overtaking.

You can get around six litres per hundred kilometres, or even less if you drive smoothly. Even if you demand the full potential of the engine, it's rare to go over six and a half litres per 100 kilometres, which makes it a benchmark in the category.

As I said above, its only downside is that under heavy throttle loads, the diesel engine is noticeable in the cabin, which, on the other hand, is silent when faced with the friction of the tires on the asphalt or the air on the bodywork. At sustained speed the diesel is hardly audible, but with petrol options up to 170 hp, I would seriously consider trying a petrol before going for the diesel, even if it is a whirlwind of torque.

In terms of handling and comfort, it's like the 500X 4×4: it's a stiff car, but not uncomfortable. What the 500X achieves thanks to a set-up reminiscent of the 500 three-door, is that the body movements in terms of pitch and roll are hardly expressed, and the masses are very well controlled despite the size of the device, which gives you a positive feeling when attacking curves. 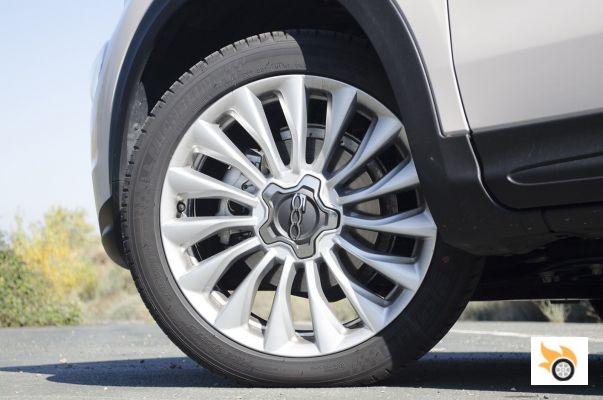 The steering is one of those strange points. As with the original 500, the electric assistance is a bit strange, especially around the centre dead centre, where the movements are a bit springy. You have to choose sport mode on the rotary mode selector to increase the resistance of the steering wheel to turning and improve feel. The precision of the line, in any case, is beyond any doubt.

The extra suspension stiffness brings with it a little more dryness over bumps than its rivals can offer, which detracts from a certain degree of overall comfort. In any case, it's a matter of compromises, compromises that you have to weigh up by testing the car before you buy it. Personally, the same thing happens to me with this 4×2 as with its brother, it seems to me a reference in terms of tuning for a B-SUV, for control and cornering sensations, although, without a doubt, the Mazda CX-3 beats it, thanks to a fluidity in curve that the Fiat doesn't have. The car from Hiroshima moves more, but it does so in a very orderly way and with little inertia, which allows it to go on the attack in a more "natural" way.

Curiously, the test unit of this 4×2 presented a sound of a plastic of the right rear wheel arch, which seemed specific to the unit in particular, when passing quickly over bumps, when the spring seemed to hook with the aforementioned trim, affecting the feeling of solidity of the chassis. We assume that it was a thing of this particular car, as this creaking noise was not present in the 500X 140 hp diesel of a few months ago. 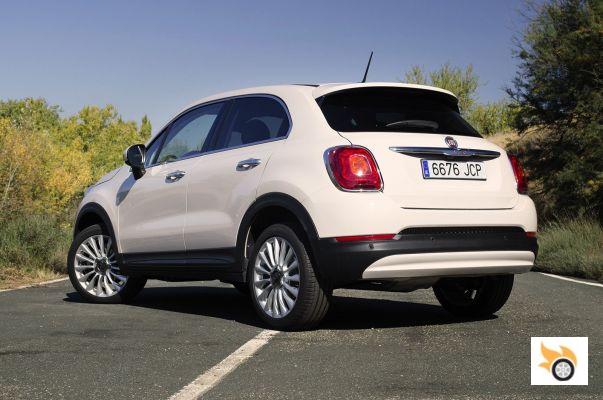 If you've been bitten by the "SUV-mania" and you're going to buy one of these things that looks like an SUV but isn't, the 500X is a very solid option.

It is because aesthetically it is one of the most attractive, if not the most attractive in the category. Also because the cabin is finished and equipped more and better. In interior space is not short for any family, and in trunk, with 350 liters is well served. For price, it is true, is not the cheapest in the segment, but you can buy this 120 horsepower from just over 20,000 euros, and recovery capacity and is well served.

In the market you have the CX-3, which flows better in the curves and whose aesthetics may seem more interesting (for tastes ...), but it sins in a smaller space in the rear seats and less ability to configure it to measure. The other best-selling rivals in the segment don't have much to do with the 500X. The Captur's trim level is well below that offered by the Fiat, while the 2008 offers extra space and ride comfort, but it suffers in the engine (it consumes more, runs less), aesthetics and body movement control.

If you like the idea of the Cinquecento and you have a family to move around with, which will limit the possibilities of doing so in a normal 500, the 500X is definitely the car for you. And if you're not obsessed with Fiat's 500 family, the car, for purely objective reasons, may also interest you.