The turbo of the magic bearings

The growing pressure on emissions and fuel consumption has led to a return to the turbo era that should never really have been forgotten. For a decade we lived through the annihilation of turbochargers (the dark nineties and the beginning of the century) due to the absence of electronic control mechanisms that would allow us to overcome the challenges they offered in terms of throttle response times.

But with electronics as an ally, today the automotive world is already dominated by turbochargers, low displacement and (cancerous) gasoline direct injection. In view of the new emission targets set for 2020, what we will see is the irruption of hybridization to a greater or lesser extent, in almost all high-volume cars on the market, to achieve emissions targets.

The most curious thing about all this is the revolution that awaits us in the field of turbochargers, which are still far from having offered everything they can to stretch the life of internal combustion engines.

This electric motor accelerates the turbine during periods of low throttle load. Thus, when we put the pedal to the metal, there will be compressed air available in the intake manifold so that the engine has an immediate and forceful response, eliminating the "lag".

But this does not result in energy efficiency, but simply subtracts waiting time and gains throttle response. The advantages come from other aspects.

The electric motor coupled to the turbocharger can also serve as a generator. Thus, when we ease off the throttle, the energy of the exhaust gases, still accelerated, is used to generate electricity in the turbo, relieving them in the mission of compressing intake air.


At the same time, the energy used to combat lag when the turbo is accelerated can be drawn from the batteries where we have previously stored energy that would otherwise be wasted.

This is how current Formula 1 turbochargers work, and this is how we will soon see them working in production engines. Currently several suppliers already have these devices ready to market them, and only the latest technical details are missing to see them implemented in a street car.

Audi will be the first firm, if the forecasts promised by its product launch plans and new engines are fulfilled, to launch a mechatronic turbo, assisted by an electric motor-generator. 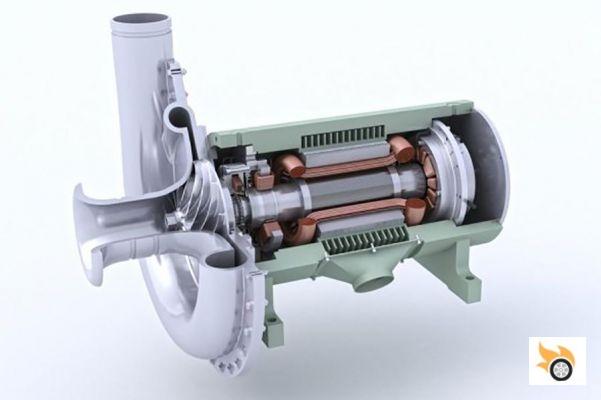 But if you think that's where the evolution of the turbocharger is going to end, you're wrong. There are now other fields of development that open up new possibilities.

As you know, if you are a turbo engine geek, there are many types of bearings for these devices. There are turbochargers that work by rotating their turbines on bushings. Other turbos run on metal bearings, and others employ exotic ceramic bearings.

The idea and needs behind the various options for bearings in turbochargers is to maximize the efficiency of these devices. Less friction, less heating, less possibility of seizure, greater energy efficiency and greater durability.

But what we wanted to talk about here is the new technology that is on the horizon. It is magnetic bearings. The idea behind them is to create a magnetic field on which the turbine shaft rests "floating".


With this system, the extreme lubrication needs of the turbocharger are eliminated, efficiency is gained, inertias are reduced and the chances of seizure are practically zero.

There are even more advantages. The magnetic field on which the turbine shaft rests can be made variable, creating an electric machine. In this way, the turbocharger shaft itself and the magnetic bearings would act as an electric motor, eliminating the need to mount another auxiliary electric machine outside them. 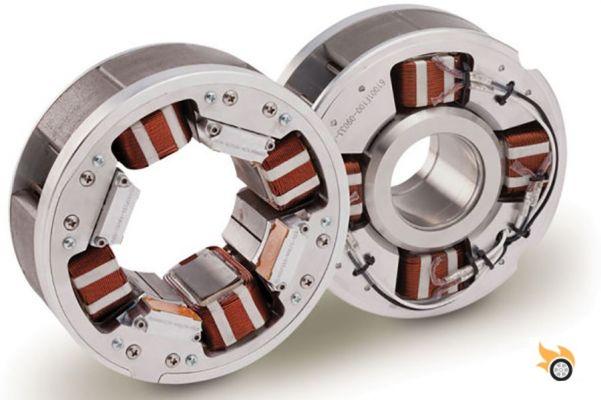 The state of the art is such that these types of variable field magnetic bearings already exist and are used in other applications in industry to support heavy weights and move them precisely without friction.

The problems to implement this technology in the automotive world are not, therefore, in the state of the art, but in the costs derived from its application.

Bringing this type of turbocharger technology to fruition involves a great investment effort for the miniaturization of components that do not currently exist in the industry. Turbine manufacturers like Honeywell, who have significant expertise in this field, should see that their investment makes sense. In other words, they can make money on their investment.


And that's the end that may not be so clear. It could take almost a decade to develop and bring to production such turbochargers on a large scale, and there are now doubts as to whether the automotive industrial paradigm will be the same a decade from now.

If the customer's focus shifts to automated cars, the idea of fuel cell or battery electric cars will probably take on a different meaning. And with technology evolving towards that kind of product, then perhaps the throttle response time, or the investment in conventional internal combustion engines, will matter less.

That this type of turbocharger is the future for the combustion engine is a fact. In fact (redundancy aside), I wouldn't be surprised to see it in racing engines sooner rather than later, especially at Le Mans. But at the rate times are changing and consumer tastes are changing, maybe this technology won't make it into the cars of the future, because they will end up being electric and automatic.

add a comment of The turbo of the magic bearings