The Touran has grown and modified its proportions, using the new MQB platform. It is 130 mm longer, 36 mm wider and 6 mm shorter, resulting in 4,527 mm high, 1,829 mm wide and 1,628 mm high. The wheelbase has grown almost as much as the length, 113 mm. According to Volkswagen, it has 63 mm more longitudinal space.

The MPV segment is not dead, and the Touran is in the European top3.

In Spain it is offered with seven seats as standard, with a boot capacity of 633 litres when the third row is folded, or 137 litres with all seats in the boot. With the second and third rows folded down, there is almost 2,000 litres of capacity. In the case of choosing the five-seater version, with no extra cost, the boot has 743 litres of capacity. The capacity data are considered up to the roof. In this generation the tailgate is optionally electric, and can be opened with a foot movement by means of another extra, "Easy Open". 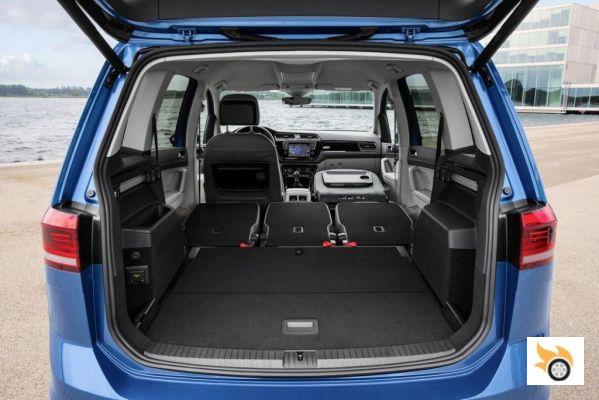 Although it has grown in terms of habitability, the net result is practically the same as in the previous generation because the seats have gained thickness. However, the space is very usable by the adjustment possibilities of the seats. The driver's seat can be placed both in a typical passenger car position and in a more van/SUV position, leaving more legroom in the second row.

The three middle seats are individually adjustable in length and backrest inclination, and offer plenty of room for adjustment. In the previous Touran they could be adjusted lengthwise by 15 cm, now by 20 cm. If you choose a Tiguan thinking that you'll gain space, you're wrong, a minivan is better used. The central seat, although it is a bit narrower, is valid for a long trip even if it has a folding table, it is not torture.


The seat belts, when not in use, are well fastened and are not a source of noise or shocks.

We move on to the third row. These seats are positioned and folded from the boot with a couple of flicks of the wrist. If the second row is folded forward a little, a 1.7-metre person can sit relatively comfortably, with their feet under the second bench seat and their knees above their hips. Access to this row will be no problem for children and middle-aged adults. 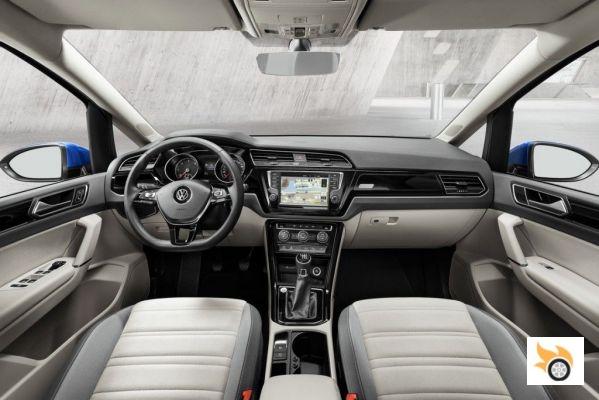 The family character is accentuated by some technological innovations, such as the microphone in the front seats so that in the third row can be heard, without shouting, taking advantage of the car's speaker system. The equipment is called "voice amplification", standard on Sport and optional on other trims.

It has up to 47 storage spaces in the interior

The traditional surveillance mirror has been replaced with an optional GoPro camera (Cam Connect App), which allows you to see static images of rear passengers when driving, and real-time video when there's a stop. That saves parents from having to turn around to see the status of the offspring.

There's a three-zone climate control with fungus- and allergen-proof filters, standard on the Sport and included in the Advance's introductory package. Two of the zones are in the front, the third zone is the middle of the Touran. By the way, both the second and third rows have ISOFIX anchorages for child seats. The brand offers some solutions that won't require the purchase of a child seat, such as raised seats with additional support. 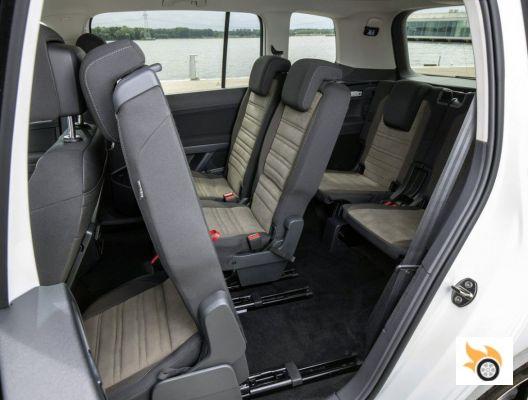 If we are worried about the Touran's capacity for long journeys, good news. In terms of acoustic insulation, it is very well worked, and the noise is quite concealed, including the engines. It also has a high ride quality, where no rattles or creaks are noticeable. Unlike the Golf SV, all versions have four-wheel independent suspension.

It has four types of suspension: standard, sport (lowered), for bad roads (raised), and DCC (variable). In the latter case, in combination with the Drive Select system, the driver can choose a firmer or more comfortable setting, depending on driving conditions. The wheels can be from 16 to 18 inches.

The tested unit had 16-inch Trondheim model wheels with 205/60 Continental tires, I found it quite nice overall, without the dynamic behavior was even regular. The bigger the rim, the lower the comfort, as there is less tyre (profile). Only the R-Line versions use 18″. In no case comes spare tire, they use anti-puncture kit. 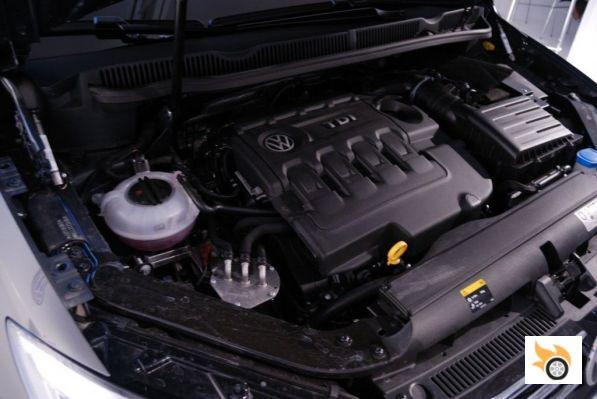 
Stop&Start is very smooth, you hardly notice when it's working.

Although for some colleagues it is a dynamically poor engine, I think that as a basic engine it is more than adequate, as long as we are willing to use the gearbox in the right way. If not, we can always choose the automatic (DSG). For the use that is assumed to a minivan, with two adults on board, it has the right power. Another thing will be to climb big ramps with a full load or pulling a trailer.

With considerable refinement, the 1.6 TDI is a pleasant diesel engine, and reacts well in most of the rev counter, from about 1,500 RPM until after 4,000 RPM. Consumption is very reasonable - 4.9 l/100 km according to the computer with varied routes - and for most families there is no need for more power. For more mountainous areas, more demanding drivers or regular trailer use, the 150 hp is more justified. 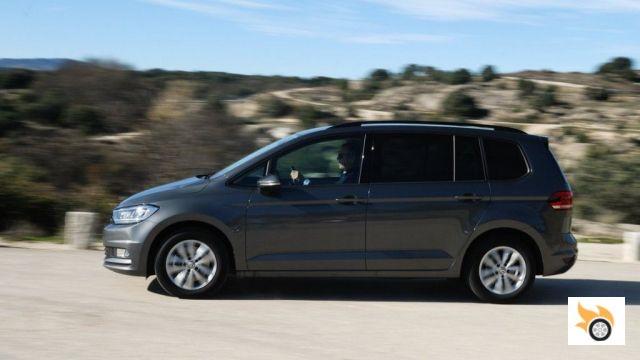 The TDI engines have selective catalytic reduction, i.e. they require an additive called AdBlue or urea which is topped up at service intervals. The unit tested, between the kilometers it had and what was left of the additive, the tank lasted about 10,000 kilometers. The service intervals are every 20,000 km, but it is not difficult to find the additive, nor is its price a problem for any pocket.

The on-board computer tells you how much additive is left. If it runs out, the engine will not start.

The driving feel of the Touran is very similar to that of a passenger car or saloon car, with a soft ride and standard suspension. The driver can, if desired, have a more SUV-like feel with the raised suspension and the higher seating position, the seat can be raised up to 7 cm. There is plenty of room on the roof, in my case, with an average height, I was missing two fists of distance.

On a dynamic level it is satisfactory, both for the gearbox and pedals, as well as for the steering wheel. The driver will be aware of everything, without discomfort, with great confidence. Even forcing things a little, proves to be agile and reliable, and although it is not the reference of the segment, it lacks little. At the moment all versions of the Touran are front-wheel drive.

For those who use a trailer, they have a sensor-based assistance called "Trailer Assist", which allows you to maneuver in reverse without having any idea or having practiced. All you have to do is move a wheel to indicate where you want to go, and the steering wheel moves by itself.

The safety systems deserve a special mention, starting with the lights. The xenon has been retired, now LEDs are the new trend. In the "basic" system, both the low and high beams are generated with diodes, not just the daytime running light. Above the headlights are adaptive and are matrix: the high beam is selectively switched off to avoid dazzling, maintaining the illumination in the other areas.

The basic versions are illuminated with conventional bulbs. LED taillights are not available across the range; they are standard on the 180-190 hp versions. Inside there are illuminated areas on the dashboard and doors, and as a novelty in this generation we will also find a "frameless" rearview mirror with anti-glare function. 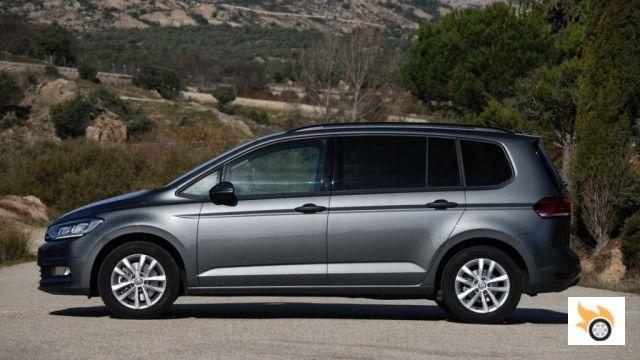 It includes additional protection, such as the multiple collision avoidance system, which applies the brakes at the first collision to avoid being thrown off when hit again. If the airbags deploy or there is a strong deceleration, the call to the emergency services is automatic, anticipating the 2018 legislation.

It has five EuroNCAP 2015 stars, more difficult to obtain than in the past.

Another novelty is the "Pre-crash", which like the high-end Mercedes, before suffering an accident (strong brake action) raises the windows, closes the sunroof and pretension the seat belts. On the sidelines are the conventional passive safety systems, with up to nine airbags, and a 25% stiffer body.

Finally, there are the sound and infotainment systems. There are five options to choose from, starting with the three basic ones (Composition), although the most interesting are the top-of-the-range (Discover). From least to most sophisticated, the touchscreens range from 5 to 8 inches diagonal. The top two allow the use of apps and maximum integration with latest-generation mobile phones via Android Auto, MirrorLink or Apple CarPlay.

The Discover models have real-time traffic information, personal POIs, remote import of destinations to the navigator, weather forecast, news, parking information, fuel prices, etc. This information is downloaded from the Internet, through a second SIM or sharing connection with the mobile phone. The top model, Discover Pro, includes Google Earth and Street View.

In short, the leap compared to the previous generation is mainly technological and technical. If we value basic models, with little equipment, the difference is not explosive, although it does not go backwards in any way. On the other hand, according to Volkswagen Spain, there is not a single one left from the previous generation. Prices start at 20,800 euros, as usual does not compete downwards with the others.