And Suzuki officials determined that it wasn't aggressive enough, that it needed a more SUV-like design, with more edges, that would appeal to the eye first. That's why they've made it almost unrecognizable when viewed from the front, with a more imposing grille and a more upright front end, where the smooth curves are reduced and it becomes more angular. The headlights (now LED instead of projector), grille, bonnet, bumpers... everything is new. In fact, it is visually wider, the track width grows 20 mm because of the tyres.

If we look at it in profile we will only notice that the overall height increases 10 mm, and is 15 mm further from the ground, so it is 180 mm from the same. The 17″ tyres have increased in width from 205 to 215, and the profile goes from 50 to 55, and apart from that there remains a 16″ dimension. There are three wheel designs in total. If we look at the rear optics, the outline is the same, but what is the interior is completely different, and also with LED. 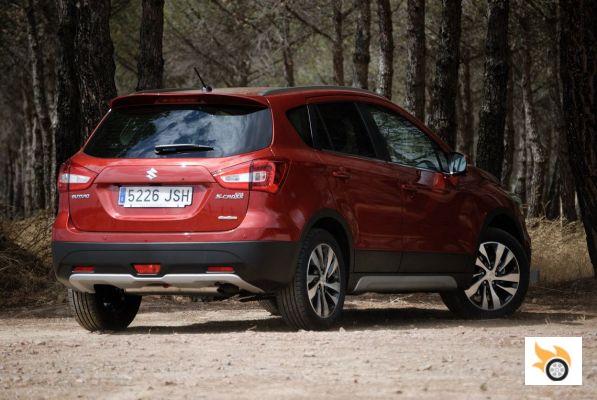 The color range adds four shades of vivid colors (Sphere Blue, Mineral Grey, Canyon Brown and Energetic Red), before it had several shades between black and white. Visually it is a car that is going to attract more attention, which is what it is all about in this segment, as the first reason to buy a crossover is the design. It's getting further and further away from the model it replaced, the SX4, and we're talking 2013, not that long ago.

Inside, some slight but effective changes have been adopted. The dashboard now has a soft coating, but that yields very little to pressure. In the central part of the dashboard the infotainment system is new, with the ability to marry better with the latest generation of phones, and with a high-resolution graphics. Surrounding the device is a piano black surface - what a mania everyone has for this material these days - instead of solid plastic. The textile upholstery is different, although the photos correspond to the GLX (top of the range) with leather seats.


The design is functional, coherent and symmetrical.

There are also new features on the instrument panel, but it's almost unnoticeable, the honeycomb motif disappears from the dials and the scale border is different. You have to take a closer look. The on-board computer display looks exactly the same. While they were at it, they could have solved a huge flaw of this car, having to manipulate the computer by rods on the dashboard itself, uncomfortable to manipulate while driving. Two buttons on the steering wheel would have been a better choice. 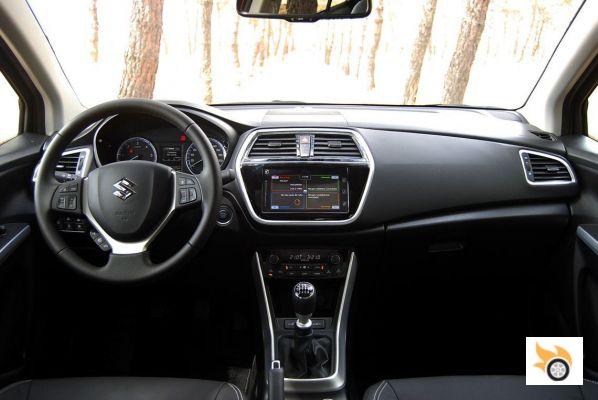 The increased track width has involved other changes, such as suspension arms and calibration of the electromechanical power steering. According to Suzuki, it improves steering feel. I don't know how the previous model fares, but I found it totally satisfactory if I'm not comparing it to any sports car.

I found it very comfortable on the road, capable of holding well in a cornering area (at a moderate pace), and I was positively surprised on a dirt track with lots of pebbles of a few centimeters that I drove a bit fast. The suspension leaks a lot, and now it's harder to bump the suspension. Trying to do the same with a compact I would have almost certainly bumped it on a couple of abrupt hill changes.

The all-wheel drive system is unchanged, it has a normal program, another for snow, and a sportier one, plus the possibility of forcing an equal torque distribution. I tried to release the clutch suddenly in first gear, with the engine revved, to check how it tractioned in mud. Despite using road tyres, it came out of the set very quickly, although the steering floated.


The test was done in varied conditions: dry asphalt, dirt, a bit of superficial mud, and with a torrential rain. If you contextualise the type of car it is, the all-wheel drive system seems to me to be very versatile, gives very good traction in varied conditions - what the tyres allow - and gives confidence to the driver. It's a fairly neutral car if you don't try to push it.

The most extreme thing I did was to drive on a dirt track inside a farm, with the aforementioned boulders, and take a couple of corners rally style, anticipating the crossover. It was very easy to steer, brake and accelerate. If in these cars what is sold is versatility, I have been convinced with the S-Cross in that sense. It's a pleasure to drive it and do miles, so much so that I stretched a little the planned test route. I felt at ease.

To tell the truth, the driving feel is as close as you can get to a normal compact car, but without being one. On the road I didn't notice the slightly high driving position, nor do I think it sways, and it responds very well to what is asked of it. I, who detest the dynamics of tall cars, could jump through hoops with this model, because I don't have the feeling of driving a crossover.

It's very light, that explains many of my appreciations. 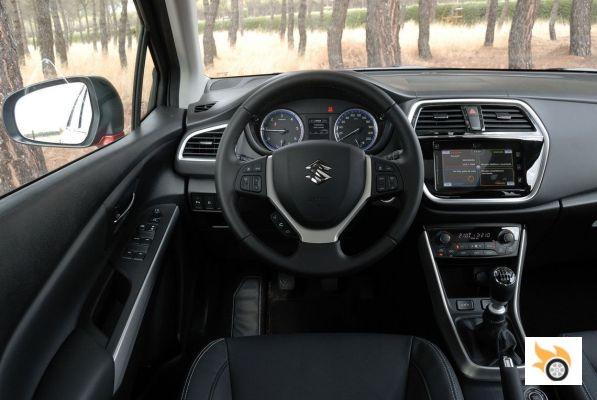 From a 120bhp 1.6 engine, there are now two options. For starters we have the 111bhp three-cylinder 1.0 BoosterJet, which also has a five-speed gearbox. According to the torque curves, nothing is lost compared to the old engine except smoothness and balance, the magic of the turbo. The performance is the same: 0-100 km/h in 11 seconds, 180 km/h top speed; the difference will be more noticeable in recoveries because it has more torque available and for longer.


Above it is another turbo engine, the 140 hp 1.4 BoosterJet, which like the 1.0 is of Suzuki origin; it's tempting to think it's Fiat's 1-4 T-Jet, but it doesn't even have the same displacement. The more powerful engine is associated with a manual or automatic transmission, in both cases with six gears. The three-cylinder engine is rated at 5 l/100 km, the 1.4 increases to 5.4-5.6 l/100 km depending on the gearbox and type of traction.

A lot of car for a one litre engine? It weighs pretty much the same as the retired 1.6, which is about 1,100kg, so we're not talking extreme downsizing, this car weighs the same as the Ford Fiesta 1.0 EcoBoost. It should be loose enough, and if you're careful with the throttle, the thirst should be contained. In homologation the atmospheric consumes 0.5 l/100 km more, it was already very tight. 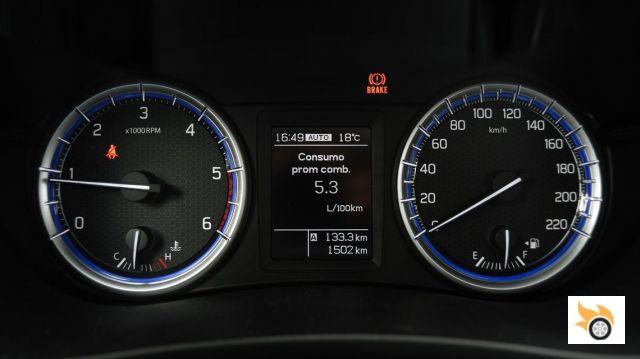 As for the 140 hp, it reaches 200 km/h in all three cases (2WD manual, 2WD automatic and 4WD manual), only the acceleration data changes: 0-100 km/h in 9.5 seconds with one driven axle, 10.2 seconds with two driven axles. The difference is reversed when accelerating on slippery surfaces, obviously. The all-wheel drive adds 65 kg to the overall weight, so it's normal that pure performance suffers. In terms of fuel consumption we're talking about 0.2 l/100 km more. You can't force the car to drive in 2WD mode with all-wheel drive, it's automatic.

This engine, which is of Fiat origin, spends practically the same as before, or a little more, possibly because it has less clean aerodynamics. It is rated at 4.1 to 4.6 l/100 km, depending on the engine combination. It can be chosen as a 2WD manual, 4WD manual and 4WD automatic; only the automatic is a dual-clutch transmission. It is clearly slower than the two petrols, despite the 320 Nm of maximum torque, because the weight difference is around 100 kilos.

Consumption seems to be quite low, at least according to the on-board computer. Considering the way I drive, an average of 5.3 l/100 km seemed very low, I wouldn't have been surprised if it reached 6 or more. At a more relaxed pace, and without looking for a deliberately low average, the average was under 5 l/100 km. This will have to be corroborated later. Overall, it's a very pleasant engine, with little noise, little vibration, very responsive, and even the Stop&Start function is convenient. 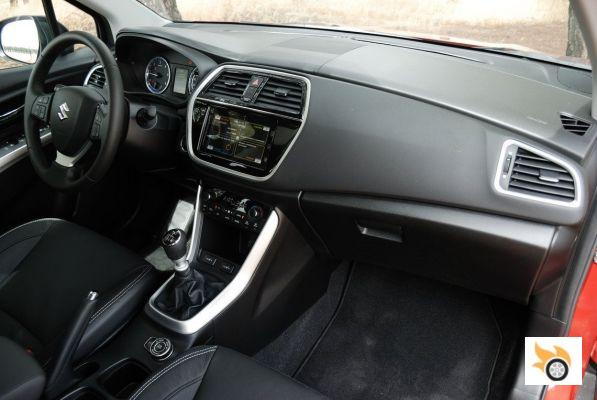 Equipment at a glance

Suzuki continues to use an internal nomenclature system that is more outdated than bell-bottoms. The base model is the GL, which comes standard with a Bluetooth stereo, steering wheel-mounted controls and Hill Start Assist. The second trim level, GLE, adds LED headlights with automatic function, rain sensor, infotainment system with 7″ screen and reversing camera, and heated seats.

For a little more - engine being equal - we got the GLX, which rounds out the equipment with front radar, which involves adaptive cruise control, predictive braking control and a light warning before crashing. The system worked for me three times, it's a bit sensitive and warns the driver in time, looking at differences in speed with respect to other vehicles. It's better that it's sensitive, because it accustoms the driver to be more conservative with his margins.

As it usually happens in Asian brands, you can't choose any equipment with any engine. The 1.0 BoosterJet is associated with the GL and GLE, and only with front-wheel drive. The 1.4 BoosterJet is only offered with the GLX trim. As for the diesel, it is available in GLE and GLX trims, it is not available as a base. The price "hook" is 16,935 euros for the 1.0 GL, higher than the model it replaces, but with a little more generous equipment. 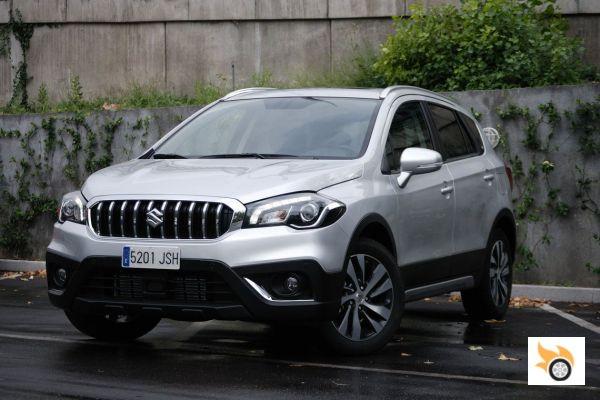 Here are the current prices for mainland Spain and the Balearic Islands, including campaign:

These prices can be sanded another 1,500 euros if you opt for financing. There are no extras, in the case of opting for metallic paint must be added 330.77 euros (PFF), and the corresponding taxes, 21% or 25.75% (1.4 2WD AT and 1.4 4 4WD). Now you can better understand the jump in price of these last two versions, is more for taxes than for factory price, a few gramillosh of CO2 are to blame.

The navigation comes standard with the GLX, in the GLE can be put as an accessory.

And so far all that can be said of a contact shot. As a crossover I find it one of the most recommendable on the market, and I say this because it is very difficult to like a car in this segment, and I know a few rivals. Moreover, if we compare prices, the S-Cross is the most rational options, the Opel Mokka is cheaper, and the Mitsubishi ASX is very close. 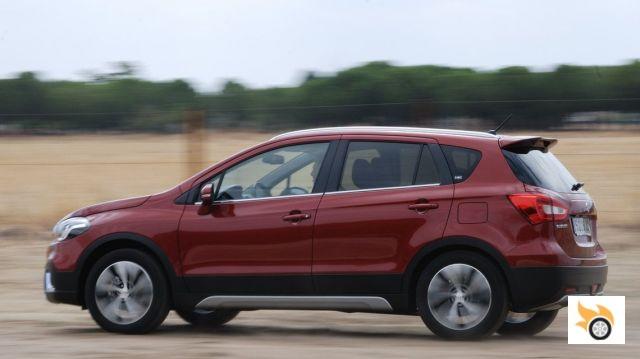 All a candy for those who are behind a car of these, to see if sales accompany, estimated to sell about 1,900 in 12 months. Did I say it has five years warranty? It is one of the highest in the market, and Suzuki will be offering it progressively in its range throughout this year. In short, it's a model that may not be at the top of the list of possible purchases, but when you discover all it has to offer, you think, "and why didn't I discover it before?"