We already tested the Active Tourer at the end of last year, with good sensations and good results (you can re-capture it here), but we had to pass the same test with the large version, with the Gran Tourer, which offers more trunk space, or the possibility of having two extra seats to have seven in total. 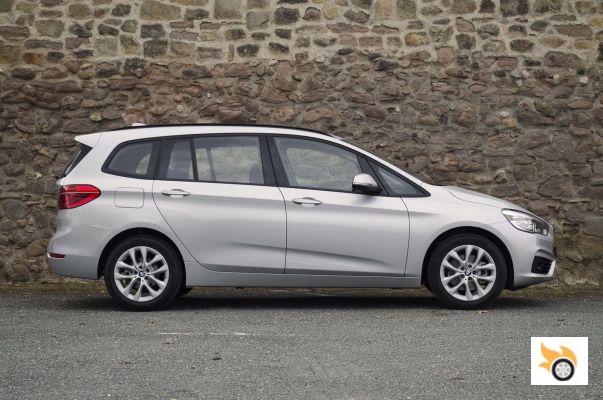 Aesthetically, a five-seater MPV never works as well as a seven-seater. Especially if both share many panels. Where the Active Tourer could be considered "even attractive" (don't kill me), the Gran Tourer has to play with more complicated proportions. With a straight roof for longer, with a more upright hatch...

It's not an ugly car. It's not unpleasant to look at, but it's not as well resolved as its little brother. In addition, it has BMW details, such as the grille with its two kidneys, or the shape of the headlights, or the work of surfaces, but it does not have the typical proportions of the Bavarian brand cars, and that plays against it. 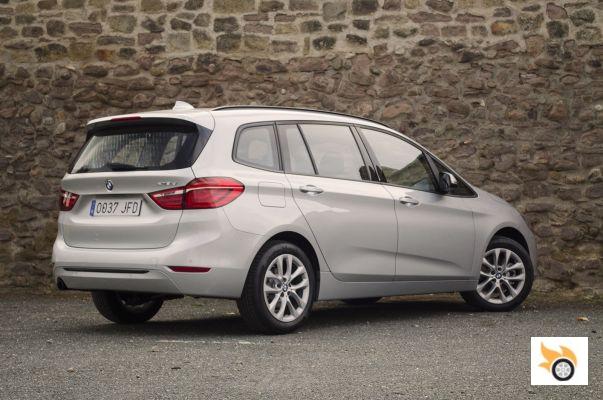 However, if we focus on the C-MPV segment, and variants with seven seats or equivalent trunk, it is clear that here all are similar, and the BMW manages to play with their differences to mark character before a Grand C4 Picasso or a Ford Grand C-Max, resulting more "dynamic", if you can say that of an MPV. 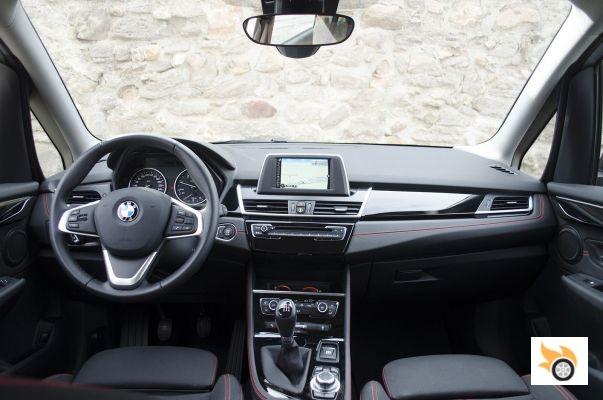 Inside, there are no big surprises. Everything we told you about the Active Tourer last December applies to the Gran Tourer in the front seats. In other words, it offers a quality ambience, with materials, fittings and finishes above the rest of the MPVs in its segment, with ergonomics that are simply perfect.


It is clear that it is not going to thrill anyone with the design of its elements and its shapes. BMW has MINI to do strange things, but with its flagship products it keeps copying over and over again the same general design that, on the other hand, gives good results.

As it is, the test unit had the Sport trim, which included cool front seats where you could adjust even the width between the backrest petals, which is great. Outward visibility is good, space in the front seats is good, and the driving position is very well achieved for an MPV. 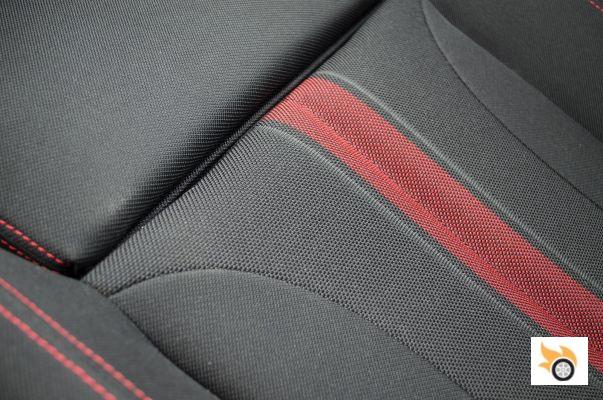 The rear seats in the second row gain headroom compared to the Active Tourer, but it's not something that "impresses", although it does give a feeling of greater overall spaciousness. And then there's the boot or the optional third row of seats, to be paid separately (900€).

If you opt to keep the Gran Tourer as a pure five-seater, you'll enjoy a generous 645 litres of boot space. Believe me, it's a huge boot, with plenty of room for everyone, so a family of five with that space can be more than comfortable for any journey they're faced with.

If you opt for the third row of seats it gets more complicated. There are two extra seats for emergencies. They don't have isofix anchorages, so they're not really safe for small children, but adults won't fit back there either. The moral of the story? They are two extra seats for very specific occasions, but not for ordinary use. For something like that you'd have to go to a Ford Galaxy or something that size.


For the rest, the cabin is in line with its segment rivals, and with the integration, now standard, of an infotainment system screen with navigation, which, yes, can be improved by paying an extra in exchange for which it gains size and performance. 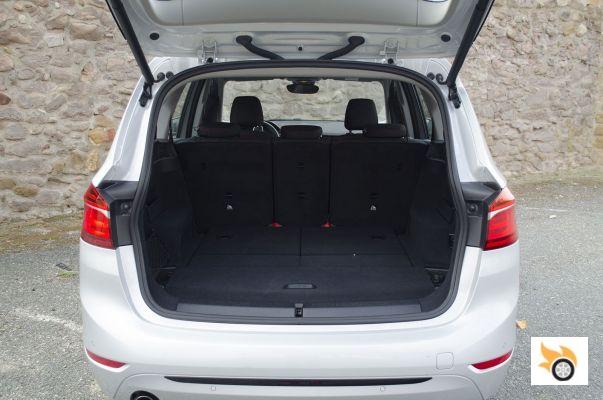 The trunk, by the way, integrates automated tailgate as standard, which is always a good idea, because believe it or not, once you try it, once you try that opens and closes only when you go to do the shopping or load the stroller of the little one of the house, you get to appreciate it. Am I getting old? lazy? cotton? You can give your opinion in the comments. 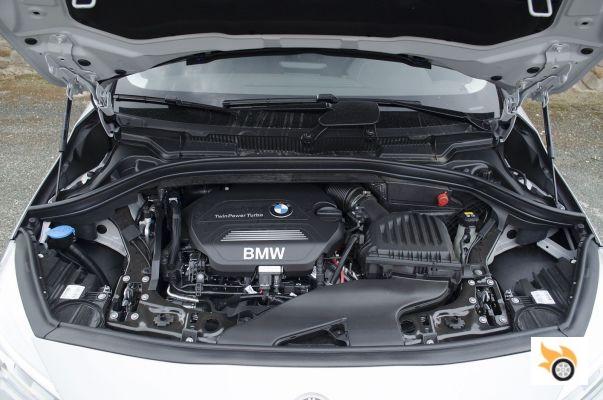 Under the skin of the first MPV and first front-wheel drive car with a BMW logo, the 2 Series Active Tourer and Gran Tourer use the UKL1 modular front-wheel drive platform. Created to accommodate all MINI and BMW C-segment models (1 Series, 2 Series MPV and X1 for the time being), the "license" to amortize it over hundreds of thousands of cars allowed the Bavarian company to invest in technology for its development.

And this is noticeable. Beyond the brief technical data (McPherson front, multi-link rear), the monocoque makes intensive use of very high strength steels, while the engines belong to the modular family of the house, with 500 cubic centimeters of unitary displacement and relatively long stroke for its diameter (84 x 90), and that give rise to combinations of three and four cylinders. In the case that concerns us today, the 218d pulls a two-liter four-cylinder diesel direct injection common rail with variable geometry turbocharger. 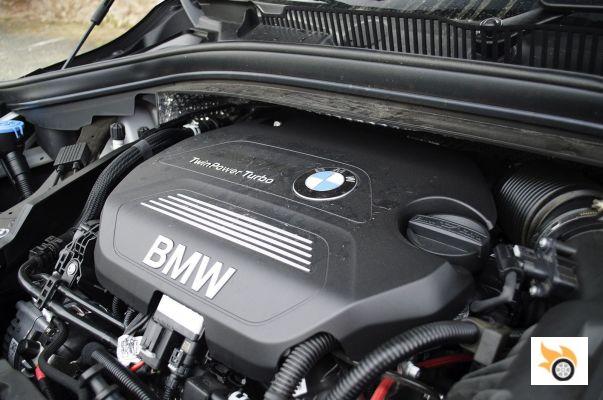 The engine delivers 150 hp maximum power at 4,000 rpm, with 330 Nm of torque from 1,750 rpm. It can be mated to a six-speed manual gearbox or a torque converter automatic gearbox, also with six ratios.

In addition, and only for the 220d versions, unlike all its rivals, it can be purchased with four-wheel drive, which is an interesting extra for those destined to drive in areas with low grip frequently. 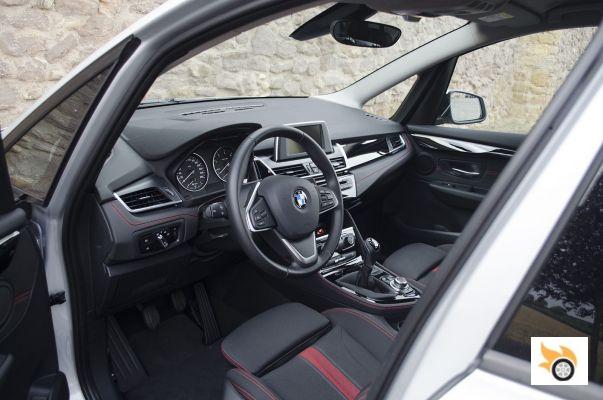 Yes, it's a BMW, but no, you can't expect to have fun with it between bends or cruising along a coastal road while the air rocks your hand and you hear "you like to drive" in the background. We noticed that when we tested the Active Tourer, and the Gran Tourer is no different in any way.

It's a capable car. Engine-wise, with 80-120 in six seconds and 0-60 in 9.3, it scores 29 points on our performance rating system, which is more than good enough for an MPV of this size. This 150 hp two-litre diesel engine is capable of moving the Gran Tourer with ease to tackle overtaking and hill climbs without any complexes.

The response is very good. Smooth from almost idle to full power, no jerks or lag between demands on the accelerator and engine response. The only downside of the engine is that when cold it vibrates a bit and sounds rough, something that disappears as soon as it gets warm (there is no needle to use, so...).

Consumption in "real life" is between 5.5 and 6 litres per 100 kilometres, quite close to the official figures (4.3), so you can do long miles between refuelling.

What about the chassis? There is a driving mode selector that modifies the throttle and steering response. In "sport" mode the car becomes a machine with a positive feel, precise lines and adequate weight on the steering wheel, although with zero information on the grip available through it, so as not to vary with current trends.

The springs and shock absorbers are well chosen. They allow to filter well the irregularities of the road, even in full support, without the car breaks the line, flanee or bounce. But they're not too soft either, so there's no "bouncy" pitch or roll, so the car flows through corners with ease.

You won't have fun with it, that's for sure, but you don't get that feeling that you get with a C4 Picasso that "the car is clumsy". Here you don't "stick the nose" in the road, nor do you have to make an effort to make the car trace. 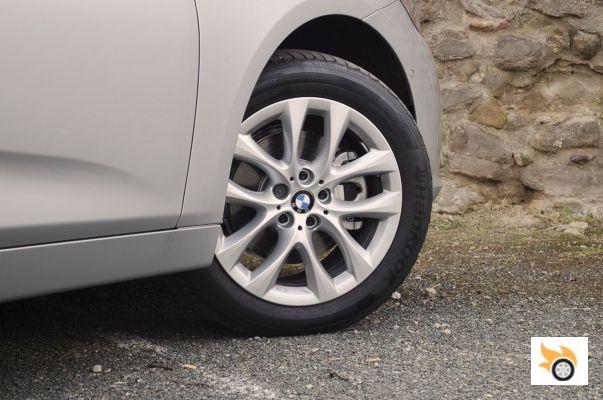 The only drawbacks are the tyres. When we tested the Active Tourer with these same tyres, we had to drive it in the wet, and we didn't like them, because they lacked grip in those conditions. In the dry, if the asphalt is good, they are acceptable, but if you find yourself with scratched asphalt (in those areas where it is renewed and put for better drainage) are too loud, something that is magnified by the reverberation of a very large and hollow cabin, as a good MPV.

In the city, despite being a seven-seater, it is not clumsy or too big to maneuver, by the way.

However, if you have to compare it with its rivals, its only direct rival, the B-Class, isn't as well tuned, it's drier, more uncomfortable and noisier, and doesn't flow as well around bends. Among the generalist cars, only the C-Max could compete with it in cornering, but the BMW has more and better engine. 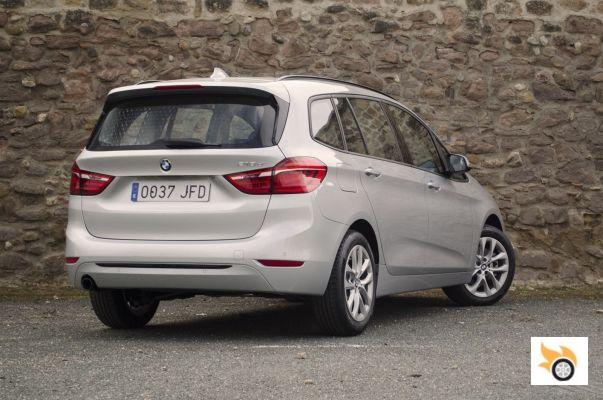 As it happened with the Active Tourer, the Gran Tourer leaves us with the feeling of having tested what is probably the best C-MPV on the market. The problem is that being the best in its category doesn't make it a "good BMW" under the brand's historical criteria.

While it has impeccable handling and a very good engine, it has nothing in the way of "driving pleasure", even if it is the best in cornering manners, to argue with the C-Max.

And then there's the price. The tested version is at 33.252€, with the seven seats, manual gearbox and the 150 hp engine. It comes standard with xenon headlights (the test car had LED headlights that are just great) and the infotainment system. But if you look at an equivalent Grand C-Max, with 150 hp diesel and seven seats, this one costs 26.275€ with the Titanium trim. That's €7,000 more to pay for the BMW.

The question is whether the extra in quality of finishes and materials (which is very noticeable), in soundproofing and ergonomics (it is somewhat less noticeable) in seat quality and engine feel (the Ford is more muscular but also less sweet), justifies going for the premium.

Other equivalent cars, such as the Grand C4 Picasso, the Grand Scenic or the Zafira Tourer, can't compete with the BMW in terms of road performance, while the Mercedes-Benz, its only premium rival, doesn't have a "big" version like the Gran Tourer, and it also has the drawbacks we've already mentioned above.

If I were looking for a car like this, would I buy it? I don't know. I'd probably spend some time testing the Ford and the BMW and doing the math at home before deciding, but I think I'd end up with the Ford, because the economic difference is too big to justify everything else, especially if you end up looking at standard equipment as well.