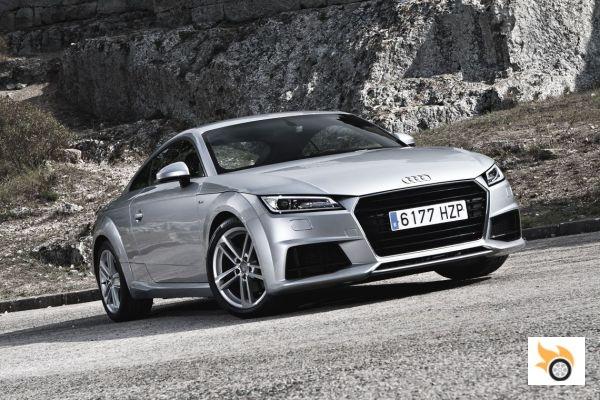 The fact that Audi has dominated Le Mans in recent years with diesel prototypes does not mean that the diesel engine has a sporting superiority per se. Although the development of technology in diesel engines allows them to reach very high power and torque figures, the gasoline engine has for him a number of advantages in terms of power (with equivalent displacement and technology), such as driving pleasure, loudness, etc.. Of course, the turbodiesel offers the advantages of a huge torque and is much more sober than gasoline. 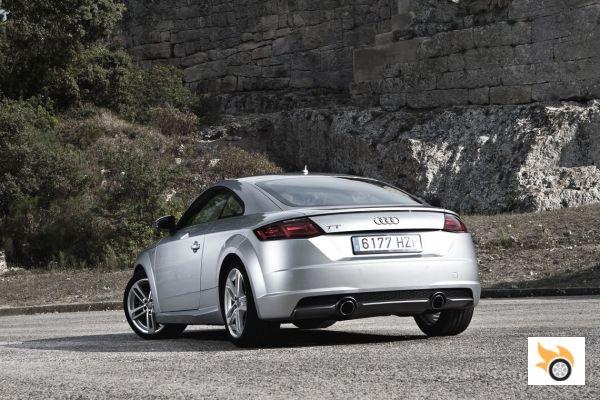 For Audi these theories do not make sense, because they believe that everything is a matter of the use made, not the body of the car that equips it. Therefore, the new third-generation Audi TT is available with the 2.0 TDi 184 hp with 6-ratio manual cmabio and associated with the Ultra seal of the firm of Ingolstadt. Thus, we find a very promising and iconic body associated with the efficient but loud TDI; an odd couple.

Although the previous generation Audi TT already had a diesel engine (2.0 TDi 170 hp), it was not the first coupe of wide circulation in equipping this type of engine, was the Renault Fuego 2.1 TD in 1982. It was the raison d'être of the Fuego diesel and is, in part, that of the Audi TT TDi: to offer to all those who for professional or personal reasons travel many kilometers the possibility of doing so with a beautiful 2+2 coupe. After all, no one forces you to choose a Volkswagen Passat or a Ford Mondeo as a company car. 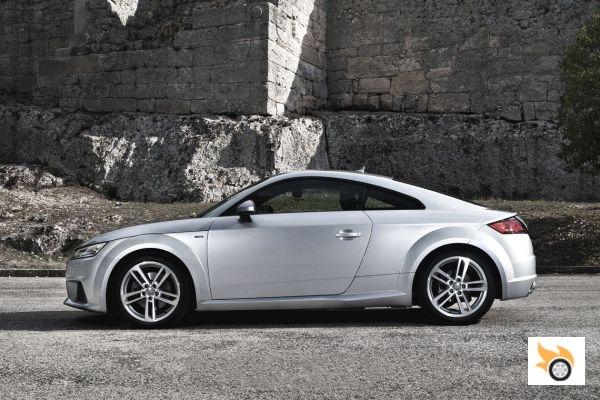 At this point it's not necessary to introduce the Audi TT or talk about its aesthetics, Guille has already done it perfectly in a super special dedicated to the iconic coupe (you can read all about it, from the genesis of the concept car to the creation of the last generation through the USPI here). The Ultra label, on the other hand, perhaps needs a little introduction.


Audi Ultra is the set of technologies and innovations used in a car brand to achieve maximum lightness and the lowest possible consumption. In short, it is the Audi equivalent of Mazda's Skyactiv. Starting from the principle that every improvement in comfort and safety implies an overweight car, this in turn means a more powerful engine -and often heavier-, which in turn requires a more robust gearbox, more powerful brakes -that is, larger discs-, etc.. In the end the car becomes heavier and uses more fuel, so it will need a bigger tank to conserve range, which makes it a bit heavy.

With a composite chassis and an aluminium body, the new TT is 60 kg lighter than its predecessor.

It's a vicious circle. To break it, Audi has been developing all kinds of technologies to reduce weight in their cars for a few years. It all started with aluminum structures in aluminum Audi Space Frame (ASF) and continued with the chassis of mixed steel-aluminum construction, elements in fiberglass-reinforced plastic, etc.. And they do not work only at the chassis level, apparently untouchable elements are also lightened, such as the springs that are now in fiber and epoxy resin. A conventional steel spring weighs on average about 2.7 kg, while the fiber spring weighs only 1.6 kg. This results in an average saving of 4.4 kg. Because everything counts.

In the case of the Audi TT coupe, the nose and floor are made of high-strength steel, while the rest of the car is made of aluminum. A large part of the front suspension elements are aluminum. The safety cell, which surrounds the passenger compartment, weighs only 68 kg and is made of aluminum. The entire bodywork, except for the two bumpers and the side skirts, is also made of the noble metal. In the end, the new TT coupé is up to 60 kg lighter than its predecessor. 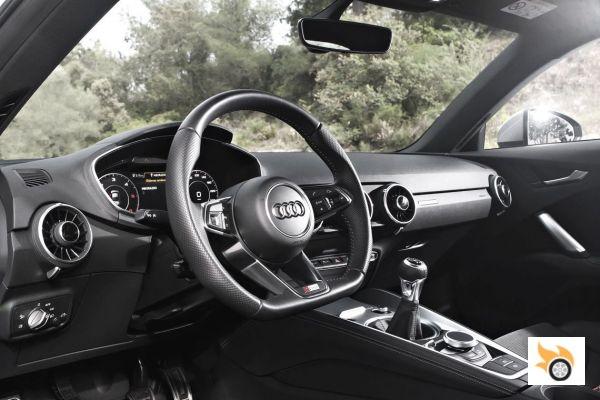 I remember the cabin of the first TT as somewhat claustrophobic. It improved markedly in the second generation. In this third generation, despite a body that closes you in, you get the feeling of being in a spacious coupe. The only people who will still feel a little claustrophobic will be the rear passengers, but taking them in there for more than 30 minutes would be torture. Visibility is excellent in all directions and you can easily find your ideal driving position thanks to the many adjustments. The ergonomics of the new TT are simply great. The semi bucket seats are very comfortable and allow you to drive 700 km without feeling a hint of fatigue.

The dashboard design is a delight: clean, simple, elegant and at the same time modern; the seats are perfect.

The dashboard design is a delight: clean, simple, elegant and modern at the same time. After a few miles you wonder why no one else makes such simple dashboards, why do they need to clutter them up with buttons and screens like iPads mounted on suction cups? And the most striking thing about this S-Line version with hardly any options is that you get the same perceived quality and flattering materials as in the more equipped versions. 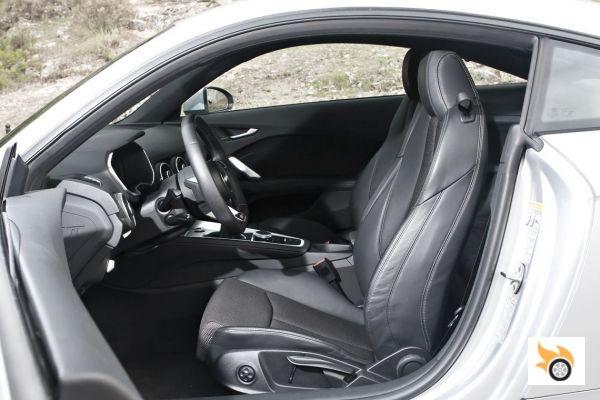 The famous digital instrument cluster that includes all functions, including GPS, is very easy to operate (you get to grips with it in a day) and then it comes naturally to you. Is it more practical than a central display? No more and no less, in both cases you have to take your eyes off the road. Personally, I think it's more practical because even if you look away from the road, you do it in one movement, like when you check your speed, and not to the side. In the end, it's a matter of taste.

The Audi TT never had the reputation of being a car exactly agile and fun. The first generation was, to put it simply, a Golf coupe with very conservative tuning. (Again, I recommend our super special to know the whole story). Things improved a bit with the second, but it was still very "Audi". With this third generation, the Audi people dared to talk openly about driving pleasure. What's more, they continually emphasized it. Finally, the TT is also a fun car to drive. And we're talking about a diesel version. 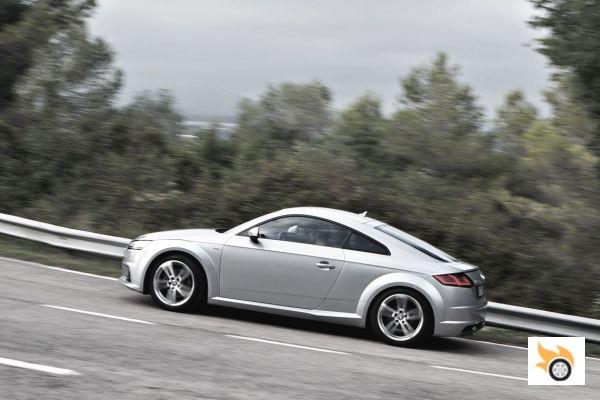 The steering is precise, direct and incisive; you can place the car millimetre by millimetre wherever you want. Despite the electric assist, the steering tells you what the front wheels are doing - ok, not as much as you'd like, but it's an important improvement for Audi. In these conditions, cornering becomes a pleasure and you go faster and faster as the car gives you confidence thanks to a rear axle anchored to the ground that follows the instructions, to the letter, of the front axle. I would even dare to speak of a certain agility, because you feel that the car turns almost around a virtual central axle. The brakes offer an ideal bite and power so that you can brake a little later. I'm surprised to write that yes, the TT TDi can exude driving pleasure. Still, not everything is perfect.

Minimally communicative steering and agility; the new TT breaks with its tradition.

For the TT TDi to show its best side, the road needs to be in good condition. On smooth road surfaces, the rear axle engages and follows commands, but if there are potholes or the asphalt is broken, the rear will tend to bounce and sometimes lose grip. It's a phenomenon that happens with the piloted dampers (optional) and the S-Line sports suspension (actually short -10mm springs) that our test unit was fitted with. 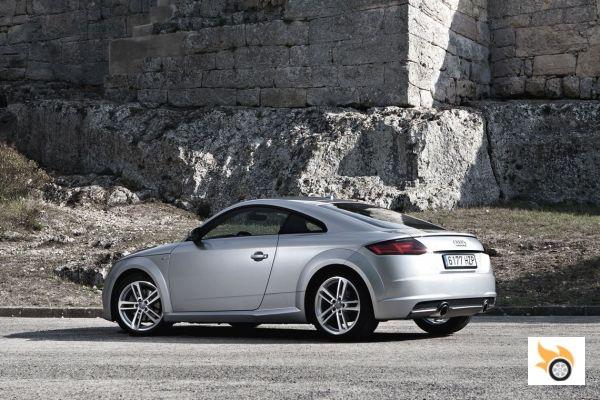 Then there's the engine. In itself, as a diesel it's an excellent performer, but the huge torque (380 Nm available from 1,750 rpm) makes dry and cornering handling a bit tricky. Sinking the right foot in like a pig, in the dry and on a straight line, it's already a bit difficult to transfer all that power to the tarmac via the front wheels. And of course, it's worse in the wet or in a corner. The anti-skid does what it can, but I still experienced a bit of torque in the steering; you know, when the steering wheel goes to one side because of the force despite having it straight. It's been a while since I've had that in a front-wheel drive car. Finally, it makes sense that the previous TDI TT was available with all-wheel drive. At the moment, this new generation can not have all-wheel drive, and less in the Ultra version where everything is done for low consumption (that average CO2 imposed by the European Union ...). Let's talk about performance and fuel consumption. 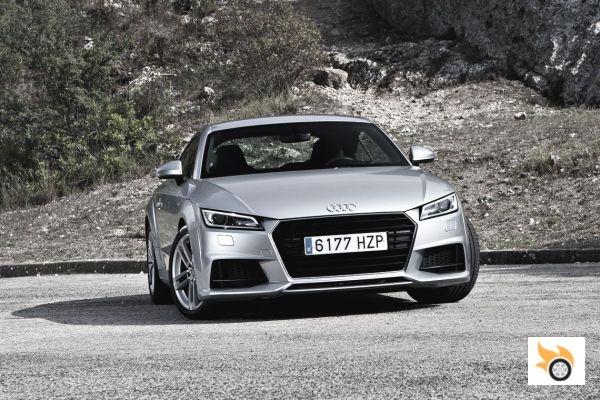 In terms of acceleration and power, the TT TDi boasts figures superior or similar to many petrol sports cars on the market. 0-60 mph in 7.1 seconds and 0-1000 m in 29 seconds. Recovery, thanks to the 380 Nm available very low down, is even better, as it takes only 5.4 seconds to go from 80 to 120 km/h in 4th gear. Even in 6th gear, a long ratio to improve fuel economy, it takes 10.9 seconds for the same exercise. There are many 150 hp turbodiesels that stop the clock in 11 seconds, but in fourth gear... Looking at the pure data, the engine has its place in a coupe body, but what doesn't convince me is the way to get it: it lacks refinement and sportiness. The sound, quite restrained, is still diesel and soulless, while the power delivery is very linear. And let's not even talk about turning it up, going above 3,000/3,500 revs is useless except to increase the engine's sound level. 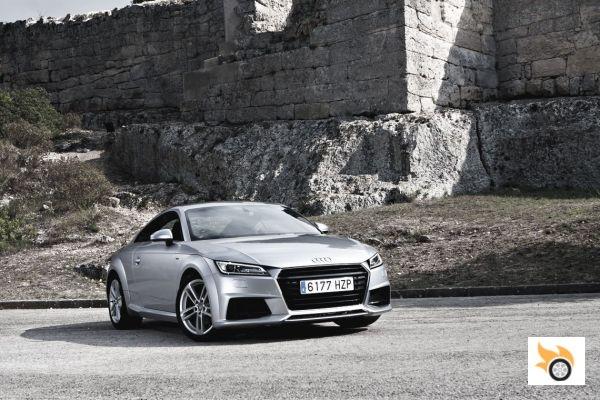 On the other hand, its fuel consumption is really low. Given its performance, I would even say frugal. Throughout the test, the average fuel consumption was 6.4 l/100 km. On the open road and motorway, this average fell to 5.3 l/100 km. Quite simply, this TT TDi allows you to do a Barcelona-Valencia-Barcelona (700 km) with a single tank. Moreover, you do it in total comfort, the suspensions are comfortable and the engine is silent at a constant and legal pace. Not bad for a coupe with sporty tendencies. Seen this way, the Audi Ultra makes sense. 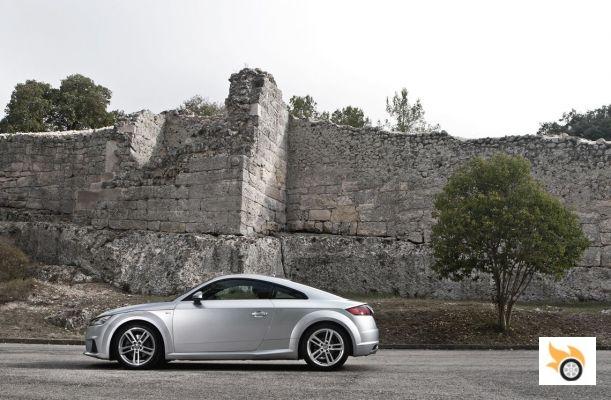 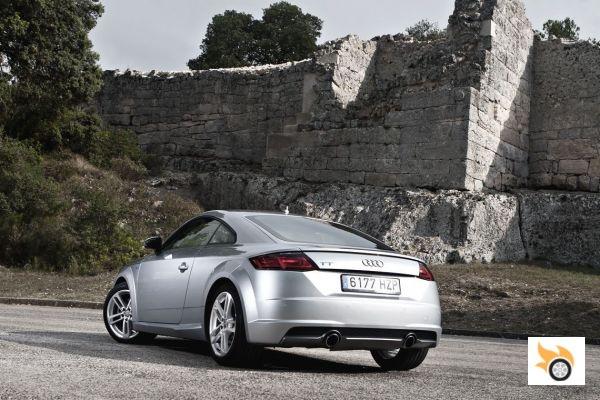 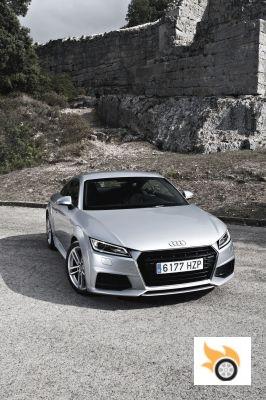