And then we also have our own aesthetic taste. Where Dani likes "discreet and elegant" cars, I like the "green Ford Focus RS" and the Wedge Design style.

We had already talked about Wedge Design at Christmas 2012, making a complete historical tour in a very successful report. But, for the love of art and this trend, we're going to offer some more "extra" insights. And today we're going to dedicate a short feature to one of those conflicting works.

It's called Alfa Romeo Navajo, and it's the 1976 work signed by Bertone. 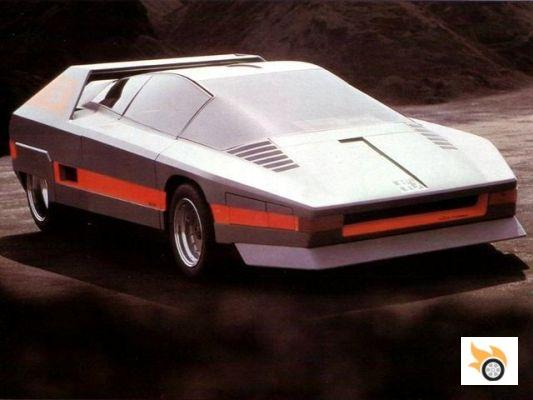 As you know, because we told you about it here, the history of Wedge Design began with an Alfa Romeo designed by Bertone, specifically by Marcelo Gandini. It was called Carabo, it was green, and much of its DNA would be transplanted directly to the project that would give rise to the Lamborghini Countach years later.

The Carabo was designed in 1968, it was built on the platform of the then successful Alfa Romeo 33 racing car, with its tubular chassis and Alfa Romeo V8 engine, the same base as the spectacular but completely different Alfa 33 Stradale (the predecessor and inspiration for the current Alfa Rome 4C), and it had, as we already told you, guillotine opening doors, as the Countach would later use. In fact, maybe we should consider dedicating a full report to it... 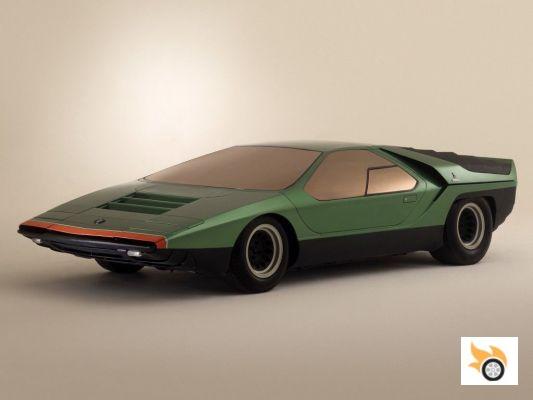 The fact is that the Carabo's design caused such a sensation that this trend of wedge-shaped cars that wanted to cut through the air quickly spread. The problem is that the trend evolved so fast that many designers started to go "beyond" the limits of logic.


Because the lines seen on the Carabo and later Countach and Stratos Zero, were so pure, so arrow-like with no extra frills, creating and generating innovation was becoming more complicated, which meant that, in a sort of defiance, more and more people were opting to over-design and add "science fiction" elements to the cars. 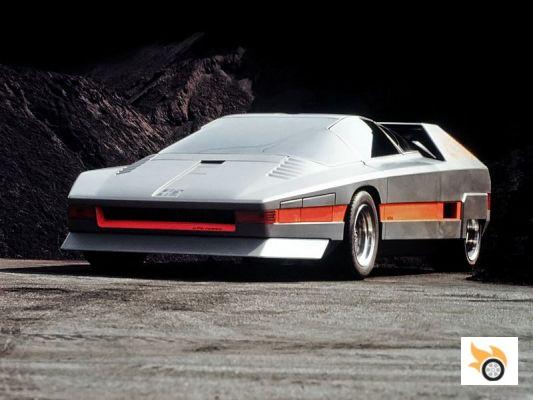 And that was 1976, when Bertone, still led by Gandini, came up with a new reinterpretation of what could be the Alfa Romeo sports car of the future. Starting from the same base as the Alfa Romeo 33 racing car, the "Navajo" was created, named after the Native American tribe.

To improve passenger space, which was very tight in the racing 33, Bertone lengthened the triangulated tubular chassis of the racing Alfa Romeo, providing a more comfortable passenger compartment. 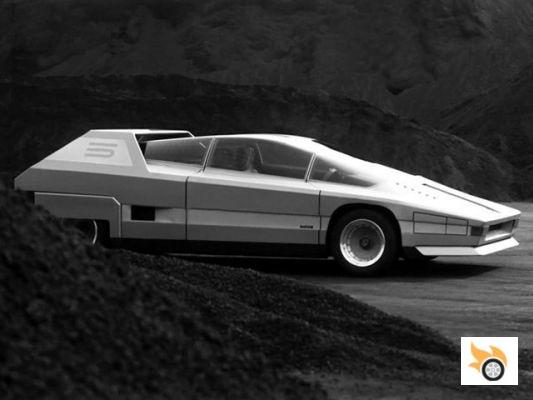 Behind the passenger seats was the same tiny cubic capacity V8 for the number of cylinders available (two litres). Positioned longitudinally, it offered a generous 230 horsepower (115 horsepower per litre, not a bad figure for the time), at a hilarious 8,800 revolutions per minute. The maximum torque was 183 Nm at 7,000 rpm, making it a fast-turning engine, in which you had to play with the gearbox to keep it at the 1,800 revolutions of useful speed in which the machine was really fast.

The gearbox had six ratios, and one of the great techniques applied to the powertrain was the SPICA electronic injection incorporated in the intake manifold. 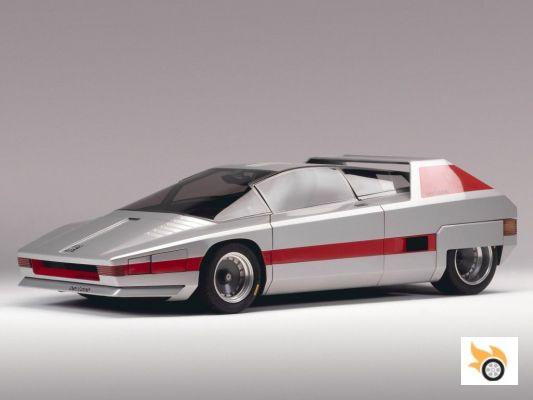 But let's get back to the design. Starting with the front end, the first thing that caught the eye was its sharp appearance, offset by a front spoiler, responsible for managing how much air passed under the car and how much was directed to the upper area. Advanced as few for its time, this spoiler was self-adjusting according to the speed electronically, which improved the behavior of the vehicle and its stability at high speeds, without compromising the angle of attack to pass curbs at low speed.

The light clusters were retractable. But not in the conventional way you would expect, but sideways, as you can see in the image accompanying the text. This solution, which was rapidly spreading, and which would last until the early nineties, was intended to improve the aerodynamics of the vehicles, reducing their frontal surface and their aerodynamic drag during the day. The problem is that at night, when opening the headlights, the aerodynamics clearly worsened... When the polycarbonate technology and the light projectors improved, it was possible to integrate the optical groups in sharper positions, without the need to make them retractable. 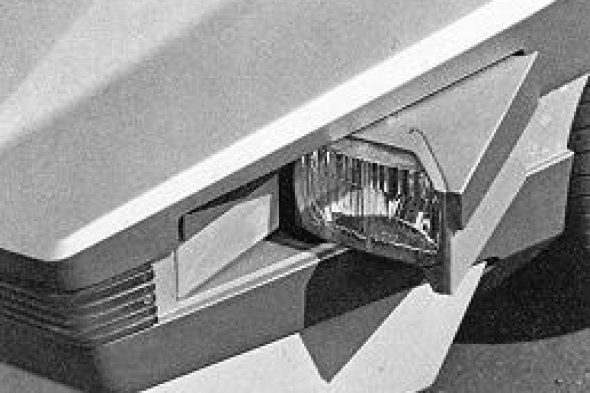 The side view, unsurprisingly, was dominated by the car's coined profile, but it also had other distinguishing features. There was the "square-cut" rear wheel arch, a pure Bertone and Gandini identity sign. In addition, the rear wheel was partially faired.

If the profile of the whole car looks familiar, don't be surprised. And if you find a resemblance with a Citroën BX, we will reassure you by saying that this is because the design of the Citroën was also made by Gandini in those same years.


The two doors were of conventional opening, but had their peculiarities in the shape of the A-pillar. The front window was panoramic, curving towards the sides of the car, and "cutting" to make room for some strange and hardly producible A-pillars. The idea was to form a sort of fighter plane style cockpit.

The shape of the rear end was also extremely peculiar. Two fins were raised parallel to the C-pillar, ascending over the rear wheel arches, to accommodate a self-adjusting rear wing depending on the speed, which reminds us in some ways to the one used in the Ferrari F40 years later. 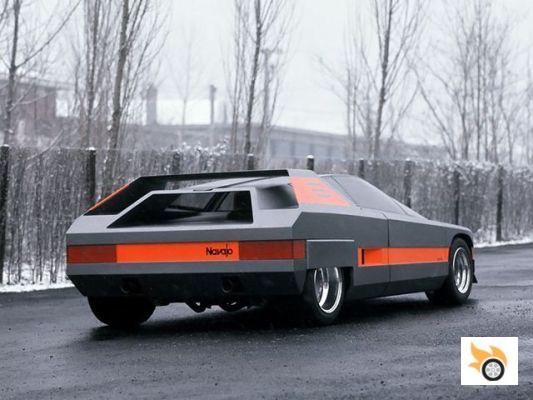 The whole bodywork was made of light fibreglass, which allowed to keep the total weight of the whole at only 870 kilos.

If we move on to evaluate the cabin, Gandini's idea here was to reduce elements and continue to keep the weight low. Thus, the two seats were made of fiberglass and were very close together. The access to the passenger compartment was conditioned by a very wide crossbeam made tubularly, as we said above, and covered with fibre. 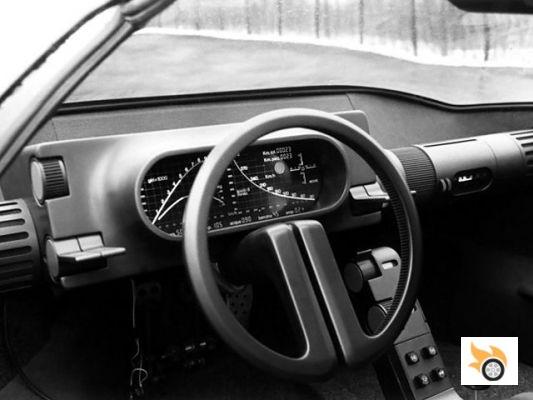 The instrument panel and the design of the dashboard, connected in a "floating" way with the central console, were certainly conservative.

And then came the 1976 Geneva Motor Show. The public was impressed, but some critics began to point out a problem that was coming our way. The "great design revolution" that had come with the advent of Wedge Design had stalled. 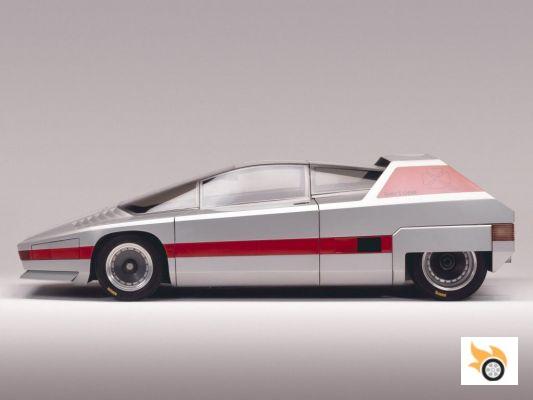 And in the absence of possible innovation (everyone was obsessed with wedge designs), the alternative had become baroque, science fiction and excesses, integrating too many elements attached to a pure form, something we would see expressed especially in the exaggerated Countachs of the last editions, shod with epic air intakes and spoilers everywhere.

The Navajo is a good example of what was coming, and although from a personal point of view I can tell you that I like it, I also have to admit that the much purer Carabo, Stratos Zero or Countach were much better for the eyes.

add a comment of Alfa Romeo Navajo, by Bertone