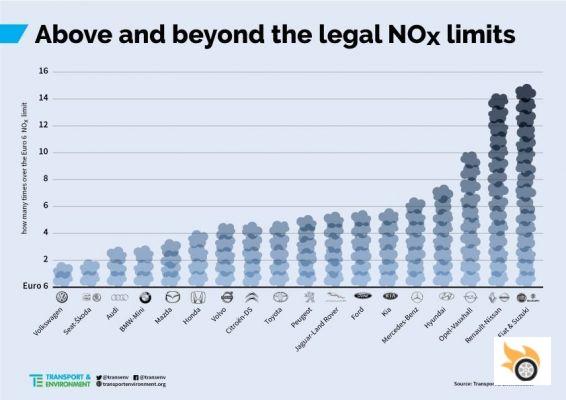 It would be bold to think that the Germans have wised up when the scandal broke, but the truth is that there is no link between bacon and speed. The diesel engines of the EA288 family, which is more modern than the EA189, is much cleaner than its predecessor, and was designed long before the cake was discovered. These engines only exceed the Euro 6 legal limit (80 mg/km of nitrogen oxides (NOx)) by double, the same can be said for SEAT and Skoda, and Audi exceeds them by triple; no, they don't cheat.

With Euro 6c (2017) it will be much more difficult to pass off as clean a diesel that is not, they are also going to be tested on the road.

However, we can consider as "clean" a diesel that only exceeds the limit by a factor 2-3, there are much, much worse. Opel, Renault-Nissan, Fiat and Suzuki (which uses Fiat engines) exceed that limit by 10 times or more, as the graph above shows. This is called turning the tables, and well done. Volkswagen is not the villain right now, but the truth is that the situation is not such that in Wolfsburg they can sleep soundly. One thing are the cars, SUVs and vans currently on sale, and another thing those who are rolling down the roads that are Euro 5.

Be careful, doubling the Euro 6 limit is to be within the Euro 5 limit, that is to say, all manufacturers are going badly, and most of the Euro 6 would not meet even Euro 3! (500 mg/km). That means a delay of 15 years...

This other graph shows which manufacturers have made the biggest contribution to poisoning Europe's skies in recent years, considering the last two generations of engines. Volkswagen (no brands added), in its Euro 5 generation, put most polluting vehicles on the road, and its contribution with Euro 6 is much more modest. Renault is in second place, it has sold dirty diesels by the bucketload. In the caboose we have SEAT, Toyota and Alfa Romeo, and we have to consider that these brands do not sell as many cars as the first ones.


All those that exceed the emission limits by more than three times (Euro 5 180 mg/km, Euro 6 80 mg/km) are considered to be dirty diesel.

The main car sellers in Europe, by groups, are VAG (VW, Audi, Skoda, SEAT), secondly PSA (Peugeot, Citroën, DS), and thirdly General Motors (Opel, Vauxhall). It is striking that Toyota is at the bottom, considering that until recently was the Asian manufacturer that was selling more cars in Europe. Today only 25% of its sales are diesel, hybrids and gasoline are selling better. Let everyone draw whatever conclusions they want in the light of the graph.

The data comes from government research done by the UK, France, Germany... as well as other private databases, and you can read specific makes and models in the final PDF report. The number of dirty diesels circulating in Europe is approximately 29 million, of which almost 1.9 million circulate in Spain, but most of them are in France. The following graph illustrates this distribution of dirty diesels. In France there has been a huge support for diesel, and it is the third European market in volume, not the first, which is Germany. The correlation between the size of the market and the quantity of dirty diesel is more or less respected.

According to a study published last year by the European Environment Agency (EEA), in 2012 there were 72,000 European deaths due to the most typical pollutants of diesel: particulate matter (PM2.5), ozone (O3) and nitrogen dioxide (NO2). 5,900 were Spanish, or what is the same seven times more than all the fatalities caused by the terrorist group ETA during decades of activity, and in a single year! In a few years we will know the figures for 2015.


The number of dirty diesels continues to increase, so the problem is growing.

Who is to blame for this situation? It is not only the manufacturers, but also the authorities that certified these vehicles to run on public roads are necessary collaborators. Transport & Environment denounces the collegiality and affinity of some countries with some manufacturers; there are examples of all kinds. Germany, the United Kingdom and France are the countries that have allowed the most dirty diesels to circulate. Note, homologations have been made in countries where there are no factories of the brands involved, see Spain: 4 homologations out of 50 examples, three are from Volvo and one from SsangYong.

Can we find lines of affinity between manufacturers and nations? In France, you can see it with impressive clarity: Renault, Dacia, Peugeot, Citroën and Nissan. The same goes for Germany. United Kingdom to a lesser extent. Sometimes these authorities are both judge and jury, they do the emissions tests and provide the certificates of conformity that are valid throughout the EU. It is clear that the clean air authorities have not done their job properly.

This would not have happened in the United States, the EPA is the only authority that can issue certificates of conformity throughout the country, and legally there are tools to bring the cheats and poisoners to book.

Why is there so much dirty diesel on the loose? In the Euro 5 generation it was clear that Volkswagen cheated, and its cars only polluted within the permissible range in laboratory tests, because these tests were detected. The other manufacturers use different strategies, mainly the thermal window (conditions must be ideal, or they pollute), preconditioning and also detection of specific test conditions. The latter is almost the same as what Volkswagen did.


Other interesting conclusions that have come out concern what light commercial vehicles pollute: vans, vans, chassis cabs, etc. It is obvious to think that loaded they pollute more, and it is true, but how much more? The least polluting light VIs are manufactured in Germany, whether they are loaded or unloaded, but in the case of Americans the difference between loaded and unloaded is very small. In the case of French brands, it's shameful, pollution increases almost fourfold when fully loaded.

After reading this, it should not surprise us that there will be hunting and trapping of diesel in the coming years: more taxes, more problems to circulate, etc.

The Dieselgate issue should be at the top of the agendas of European leaders. All those vehicles that are poisoning the population are there partly because of them, and they should force manufacturers to make massive recalls to tackle the problem. That's tens of thousands of people every year, and Takata airbags have yet to kill a single European. Public opinion is starting to wake up in the wake of the Volkswagen scandal, but it's only the tip of the iceberg. To a greater or lesser extent, almost all manufacturers are involved.

Spain is the second largest European car producer, counting passenger cars and industrial cars. We have many factories, and in the midst of the crisis only two have closed, in Europe dozens have closed. Knowing the national politicians, regardless of their sign (maybe Equo is spared), the easiest thing is that they do not open their mouths much on this issue. The automobile is, along with tourism and agriculture, the main source of wealth of our country. Let's not expect PP or PSOE to bite the hand that feeds us.

However, the European Union has to get its act together, and do it now. We cannot wait for the problem to solve itself, that is, when diesel sales have collapsed and these cars are ending their useful life in the scrapyards. It will take a couple of decades for that to happen, so if we do a stupid calculation, we will reach the millions of deaths from emissions-related illnesses caused by diesel engines. It would be normal for any government leader to be shocked by those figures, and so would you.

Road accidents are much more worrying in Europe, and that the accident rate has plummeted, and pollution kills far more people than road accidents themselves. No manufacturer has ever been formally accused of damaging public health. A few manufacturers have been forced to recall their vehicles to reduce the amount of pollutants they emit, such as Opel, Volkswagen or Renault. So many years of favouring diesel fuel in order to reduce oil imports and carbon dioxide (CO2) emissions have turned out to be a monumental blunder, and a decision that has cost hundreds of thousands of lives on the continent.

This has a name: it's called genocide, and the "selection" criterion is being European and living in a densely populated area.

add a comment of After #Dieselgate, the cleanest modern (Euro 6) diesels come from Volkswagen