Taking advantage of the fact that last weekend I had the opportunity to drive the new Abarth 124 Spider at the Navarra circuit, and since the first units are already being delivered in Spain, I thought it was worth analyzing the differences with its Mazda and Fiat siblings.

Most of you will already know that all three models are manufactured at Mazda's Hiroshima factory, and that the model has been developed based on an alliance between Mazda and the FCA group. On the other hand, many of you will remember that Marchionne's first idea was for the Italian sibling of the Miata to be the successor to the Alfa Spider, but after FCA rethought the Biscionne brand's product strategy, it was decided that all Alfa's should be made in Italy.

And so the idea of a successor to the Fiat/Abarth 124 Spider was born, a model that in its day was extremely important for Fiat in the US (75% of all those made were sold there) and that should help to boost the Italian brand on the other side of the Atlantic.

The three models share the same platform and wheelbase, monocoque, suspension arms, bushings, steering, windshield, all the glass, the canvas roof and its mechanism, the structure of the doors, most elements of the dashboard, controls, clocks, climate control, multimedia system, most of the wiring, seat structure, carpeting, most interior plastics, some auxiliary mechanical elements ... but also, most of the elements that differentiate them would be physically interchangeable.

At the wheel, the driving position, position and feel of all the controls is practically the same, of course, the habitability is the same. 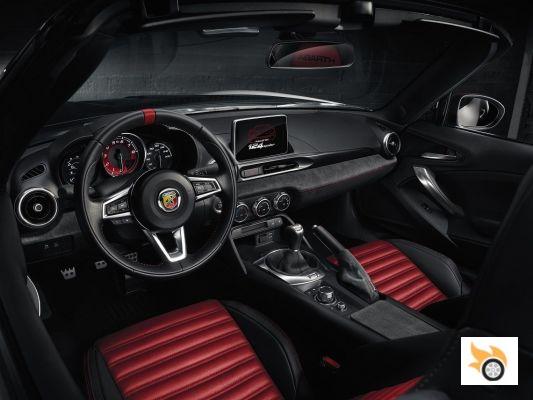 How do they differ?

The Italian siblings are powered by the turbocharged FCA 1.4 Multiair engine, while the MX-5 offers the two SKYACTIV-G 1.5 and 2.0 non-turbocharged engines, already present in other models of the Japanese brand. Interestingly, the Abarth and Fiat equip the gearboxes of the previous generation MX-5, different from the current MX-5. As for the bodywork, the fixed elements of the rear (wings, trunk lid frame) and rear panel are different, along with the exterior stamping of the moving parts (hoods and doors) front wings, and front panel. Obviously, the light clusters are different in each case.

The interior is finished off with different door panels, different upholstery for the seats, a soft-touch dashboard top, different graphics for the clocks, and some finishing touches. On the other hand, the range policy is quite different, because while Mazda articulates its MX-5 versions based on two engines, two suspension settings, and four closed trim levels (without major aesthetic differences) FCA offers two trim versions of the Fiat with certain aesthetic differences, an Abarth with a clearly differentiated philosophy, high-performance components and different optional packages.

The Abarth 124 Spider versus its Fiat sibling

The FCA group markets Abarth in Europe as an independent brand (in the US Abarth only means the sporty finish of the Fiat models, what they call Elaborazione Abarth), and strives to ensure that the scorpion models have a distinct character from the Fiat models.

Thus, the Abarth 124 Spider has a specific bumper and front grille, different suspension settings, Brembo front brakes, Record Monza exhaust, a button that modifies the engine behavior and exhaust sound, an interior with racing customization (cool the steering wheel with the red brand, and the red steering wheel with red background), an Alcantara kit (sold as an accessory for the Fiat and MX-5), sporty design wheels, windshield frame and rear arches in dark color, and optionally, the hoods in matte black vinyl.

The Abarth 124 Spider versus its cousin, the MX-5

For price and performance, the MX-5 closest to the Abarth would be the 2.0 engine, which announces 160 hp at 6,000 RPM and 200 Nm at 5,000 RPM, and equipped with sports suspension. Thanks to its slightly higher power output, but above all to its higher mid-range torque, the Abarth accelerates from 0 to 100 km/h in 6.8 seconds, while the MX-5 needs 7.3 seconds.

Not that the differences are abysmal, but at the wheel you notice that the Abarth has more kick at mid-range (although with a slight turbo-lag), but yes, with a somewhat more limited working margin, while the Japanese has a more linear engine, sweeter at low revs, and that stretches higher. The new MX-5 sounds suggestively good, but the Abarth sounds spectacular, and also, without being annoying. As for the automatic transmission, it's curious that in Spain the Abarth is offered with an automatic transmission option, while the MX-5 is only available with a manual gearbox. Most of the 124 Spiders that Abarth has ordered are automatic.

In terms of dynamic handling, the Abarth's Brembo brakes (optional for the MX-5 in the US) are a little better than the MX-5's brakes, and overall, its handling is a little more efficient, with somewhat more controlled body movements, even if that means it's a little more difficult to perceive when approaching its limits. The comfort of both is more than reasonable, and of course they are cars that can be used daily and on long trips without any problem. Personally and after having driven both, I think that the differences in this section are not really important, and both have a healthy and efficient behavior, but above all, very fun and rewarding.


In general, I would say that the Abarth is more focused on driving at the limit, while the MX-5 aims to be fun at a fast pace, and even very lively, but I insist, the differences are nuanced. 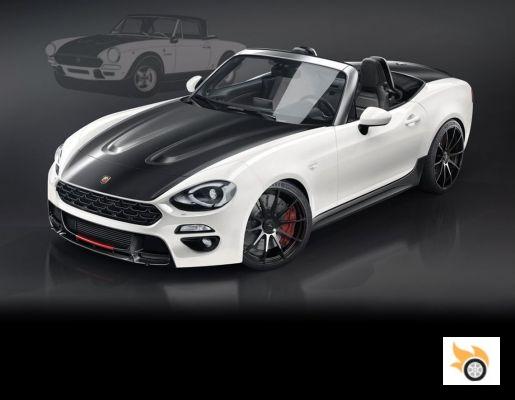 The Abarth and Fiat are tremendously faithful to the original design of the 1965 124 Spider designed by Tom Tjaarda, and I find it commendable how Fiat has achieved a design that is not at all reminiscent of the MX-5 from which it starts. It's clear that FCA wanted a design reminiscent of the classic Spider, which was a great success in the U.S., a market Fiat/Abarth wants to return to.

The Fiat 124 Spider is longer than the MX-5, and its overhangs are more cubic, so it looks "more car", if we add a classic design without stridency, and details such as the windshield frame in the color of the body or aluminum finish, we will have a classic and elegant car, with a relaxed and unpretentious sporty image. For its part, the Abarth is a radical transformation of the aesthetics of the 124 Spider. Its hooligan look will appeal to the youngest in spirit and to the most racing "pilots". Undoubtedly, an attractive transformation, of which I only spare the false front grilles, and half of exhaust outlets, and is that in my opinion, an Abarth (as a race sports car) does not need to pretend based on shoulder pads.

Instead, Mazda decided that the new generation of the MX-5 should break with the traditional oval language of the previous three generations, opting for a very personal and elaborate style, which will appeal to design enthusiasts, and its aesthetics is halfway between the two Italians, more youthful and sporty than the Fiat, and less racing than the Abarth. Mazda has wanted the new MX-5 to have an image consistent with its philosophy of lightness and purity, and that its design represents the character of the car, a dynamic character but not extreme, and like it or not, you have to recognize an interesting design. 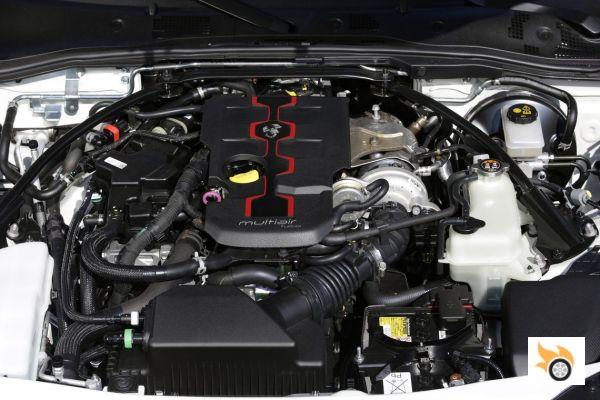 Promotions aside, if we equip the Abarth with similar equipment to the MX-5 2.0 Luxury, the official price goes to 44,000 euros, which is about 15,000 euros difference ... okay, it has Brembo brakes, interior with details in Alcantara (which are made by hand), Record Monza exhaust with two modes of operation ... but the truth, it's a lot of money. Anyway, it's more than likely that Abarth will offer strong promotions, so if you like the car, I'd be sure to go to the dealer and ask...

On the other hand, I wouldn't be surprised that from next year onwards, we will have less "sybaritic" versions of the Abarth, 100% assembled in Hiroshima (as is done with the Abarth for the American market), which should have a positive influence on its price.

As for the Fiat, and if we focus on the most equipped versions, the price of the top-equipped version is only slightly higher than that of the MX-5 2.0, so the choice will be a matter of taste. On the other hand, if we are looking for an economical roadster, and we are satisfied with the performance of the 1.5 Mazda (inferior to the 1.4 Turbo of the Fiat, but more than enough) the MX-5 will be somewhat cheaper.

Equal but different, different but equal.

We can say that all three are honest with what their image promises, because while the Abarth meets the sportiness that its image suggests, the Fiat will be ideal for those with more classic and relaxed tastes, leaving the Mazda in a middle ground that seeks a balance between style and sportiness, true to its particular philosophy of understanding the fun to drive.

And you, which one do you like the most?