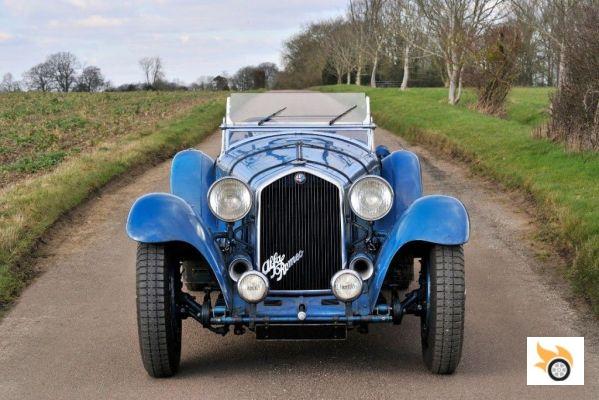 The Alfa Romeo 8C 2300 is the work of what is considered to be the most gifted and prolific of all Alfa Romeo engineers: Vittorio Jano, responsible for other mythical models such as the Alfa Romeo P2, winner of the first Automobile World Championship in 1925, or the almighty Alfa Romeo 8C 2900 of 1936.

As for the Alfa Romeo 8C 2300's sporting successes, some of the most important ones were the four consecutive editions of the 24 Hours of Le Mans (those held between 1931 and 1934), as well as the victory on three occasions, also in a row, of the legendary Mille Miglia (1932 - 1934), and some more that we will see below.

The first Alfa Romeo 8C 2300 appeared in 1931. Different variants were built, from cars intended for general road use to others designed directly for competition, such as the Spider with which Nuvolari won the 1931 and 1932 editions of the Targa Florio, as well as the 1931 Italian Grand Prix. In honour of the previous victory, the variant equipped with the shortest chassis of all the existing ones and the fastest of the whole range was called "Monza". There was also a version called Tipo Le Mans whose successes have already been mentioned.

The protagonist of the story that motivates this article is the one that has as reference the engine and chassis number 2211079, built in 1932. This short chassis unit was bodied in France by Figoni, a company specialized in these matters (it seems to be the only one of this type that they bodied). The first owner of the car was Mr. Weinberg, who competed with this car in the 1933 and 1934 editions of the Paris-Nice rally.


In May 1935 the car was acquired by Count François de Bremond, with which it took part in that year's Grossglockner Hillclimb, finishing fifth in its category. It is probable that he took part in more events with the car until he sold it in August 1937. The agent in charge of the sale was Luigi Chinetti, who would later become Ferrari's representative in North America. The new buyer had somewhat different plans for the car: it was to be a graduation present for his son, coinciding with the lucky spring chicken's twenty-first birthday.

The man's gratitude to his father and/or attachment to the car has been such that he has kept it for 70 years. During the Second World War he successfully hid it from the occupying forces. At the end of the war the car was used again, but not much and there is no record of it being used in competition. The car finally ended up in a garage, where it has been fairly well preserved, particularly mechanically.

The current owner took this Alfa Romeo 8C 2300 to restoration specialist Blakeney Motorsport a year and a half ago, where it is waiting to be restored to its former glory.

This is how this magnificent specimen has arrived quite intact to our days, thanks to the zeal of a man who has preserved his gift until he was almost a hundred years old, and to the fact that the car has been "missing" administratively due to the chaos that accompanies any war.

The pure and hard facts that give character to any car can lose importance if they are not placed in context. This model gave 142 hp and reached 170 km/h, more than many cars today, but these technical achievements were made in 1931, when the Empire State Building was inaugurated and the Second Republic was being proclaimed in Spain.


And because a picture is worth a thousand words (in motion even more), I leave this video for you to see how an Alfa Romeo 8C 2300 accelerates and how this marvel of an engine sounds.

(Measurements vary depending on the type of bodywork, those given correspond to the short chassis, as the protagonist model of this story).

Turbos for everyone! ❯