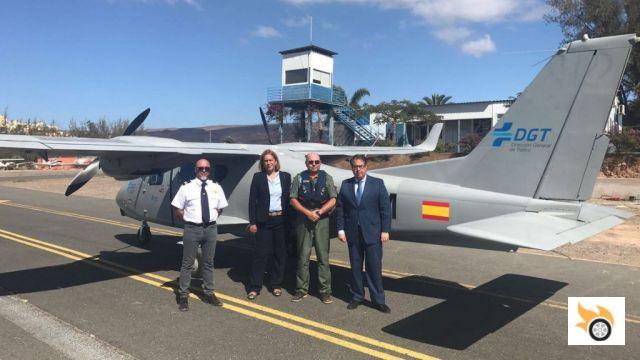 The helicopters currently used to monitor the skies -Pegasus- in some cases are nearing the end of their operating cycle, and the aim is to rationalize the associated expenditure. Therefore, in some "missions" the DGT will use more appropriate aerial means, such as drones for short distances or light aircraft for long distances. The DGT statement says the following about the aircraft shown in the image: "[...] it has a range of operating speeds compatible with traffic speeds, high autonomy and range, and the possibility of embarking image capture systems, among others".

This aircraft has two ROTAX 912S3 four-cylinder, four-stroke engines, 100 hp each, with which it can fly up to six hours (or 1,000 kilometers) with a fuel consumption of 34 liters/hour and 200 liters of fuel. Its maximum operational speed is 274 km / h, but can fly at least 90 km / h, so yes, it serves to monitor traffic and in extreme cases can follow some "hare" that is not safe to intercept by patrol cars.

The DGT says it has only made test flights and has not issued any sanctions.

It has a multisensor system called MRI (Multisensor Recognition and Identification) developed by Indra, which includes radar, television cameras and infrared. This aircraft has already been used for border surveillance by the European Border and Coast Guard Agency (Frontex) and the Guardia Civil. The sensors are located in the belly of the plane, and in principle it can operate even at night. This is a fundamental difference compared to helicopters.

With IFR certification you can fly blind, whether the sensors pick up anything is another matter. Of course, the Seaspray 5000E radar can locate "targets" (sic) both on the ground and in the air. As for the camera module, it's an Ultra Force 275 HD, which can provide a high definition television image. Come on, it can shoot fines and little debatable. It has a four-axis image stabilizer, so in principle the license plate will be perfectly legible within its range.


Another important feature is that this aircraft has STOL capability, i.e. it can operate at practically any airfield (short take-off and landing run) and refuel with automotive fuel. From a road safety point of view it can be a powerful tool, but obviously it is a double-edged sword, it can also be used to increase the sanctioning power. It is frankly difficult to escape from this type of aircraft, certainly for the ordinary citizen.

The cost of each aircraft of this type will hardly fall below 400,000 euros with its equipment, every 2,000 hours requires a review.

As for drones, due to their characteristics, and unless we start getting into military technology - where everything is possible by paying the corresponding barbarity - they have a limited range and a much smaller radius of action. It can serve as support for the work of the Guardia Civil de Tráfico agents, hopefully in a constructive and not simply punitive way.

From the tone of the press release it is understood that both the aircraft and the drones represent an economic saving compared to the Pegasus helicopters. And why not use that money to make roads safer? False dilemma, the DGT depends on the Ministry of the Interior and lacks competences for public works. The responsibility for road maintenance corresponds to its owners, so this debate is sterile. Within the Ministry's budget, money can be allocated for aerial surveillance.

According to the manufacturer, their operating costs are "extremely affordable".

Of course, the Pegasus have made numerous catches, both of those who are not following the rules of the road and of ordinary citizens who have been caught running too fast, reading a book while driving, using a mobile phone or not wearing a seatbelt. These new aerial means will increase the pressure and we will all have to be more careful because we may be under surveillance without realising it. An operator on board can have all the information from the sensors on screen and send it to the ground with a data link in real time.


Is there a countermeasure for the aircraft? I can't think of a way to do it that is economical or legal, other than having very good eyesight and being aware of its presence while driving. By the time the silhouette of the plane is recognizable and no longer confused with the typical Cessnas that move around small airfields, the electronic surveillance systems may have already captured even the color of our eyes, and obviously also the license plate.


At the moment it is a single aircraft -as far as we know- and they lack the homologation to issue fines. If the DGT finally adopts this technology, there will be few options left except to behave, which is, in the end, the safest thing for everyone.

The quality of functionalist design, or why the Golf is so highly continuist ❯