Renault Kwid? No thanks, not even for free 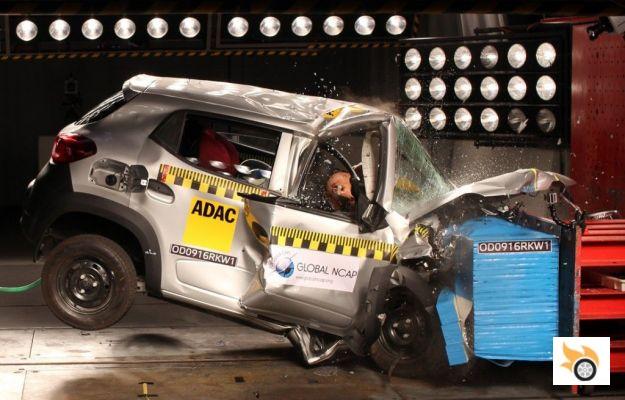 We already know, unfortunately, that safety in the Indian market leaves a lot to be desired, and is at the same level (or worse) than that offered by normal cars in the 90s in Europe. And it's been 20 years. The latest batch of Global NCAP results is a real disgrace. The Hyundai Eon, Mahindra Scorpio, Suzuki Maruti Eeco and Celerio, and the Renault Kwid have all been tested.

All have scored zero NCAP stars.

The Suzuki Celerio is sold in Europe, but that one at least gets three EuroNCAP stars because it's been suitably adapted. But I find the Renault Kwid, which has been tested three times, and all three times it's got zero stars, more striking. Come on, that car is a real danger, and there are more than 50,000 of them in circulation in the area.

The videos of shame

Firstly, there's the test of the Kwid without airbags, in a test carried out in March. Renault decided to make some improvements so that the result was not so bad.

Now we can see the result after incorporating some structural reinforcements. We can see that the car is less affected, and the damage is much lighter, but still insufficient.

This video corresponds to the Kwid with driver airbag, also with structural reinforcements. Even with an airbag, the Global NCAP result is not improved.

It turns out that Renault only incorporated reinforcements in the driver's area, not in the passenger area. The zero star result is due to the fact that the structure, although it doesn't collapse, is unstable, and at speeds above 64 km/h (standard for this test) it doesn't protect adequately.


One word defines this, it's called sloppiness.

After so many months of development and millions of euros in development, engineers manage to improve (albeit little) the safety of a car in just one month. It's an insult to intelligence, those reinforcements were not put in place for cost savings. In other words, the engineers were well aware of the Kwid's very poor safety. We're not talking about a car designed when Gandhi was young, or during the cold war, it's a modern car, designed recently.

Renault hasn't made it safer because it didn't want to.

Carlos Ghosn should be ashamed that cars from his group, which sells us so much safety in Western Europe, give such pitiful results. India may be a developing country and they may not have much purchasing power in the segment, but they have the same right to live as their French or Spanish customers. What's more, in Europe Dacia's get at least three NCAP stars, and it's a design requirement, so why not in India?

These videos should be massively redistributed on the internet until Indian customers realise what rubbish cars they are being sold, just because they are poorer than Europeans. It would have been much more decent to do a tremendous makeover to the second generation Clio, which gave four stars in Europe (under less demanding tests), dress it up as a crossover and up the suspension, and it would be a safer car. And I'd wager it would cost less money to develop.


There are some manufacturers who are starting to back away from the "if they don't spend more on safety, they don't want it" argument, like General Motors, which says that from 2019 zero-star cars will be disappearing. Others have not applied the story yet. Renault has announced that it will make further reforms to the car so that the result improves, and Global NCAP will retest the car when that has happened.

add a comment of Renault Kwid? No thanks, not even for free