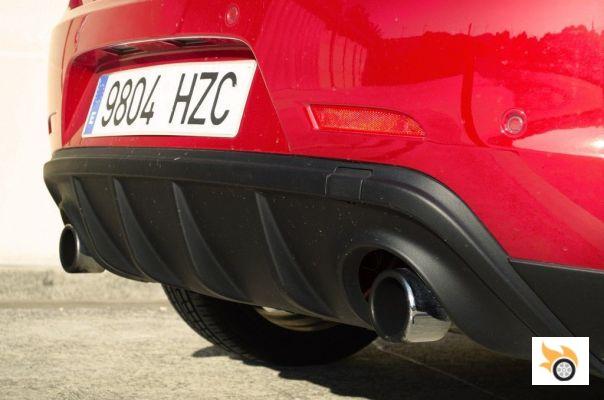 "The bad thing about diesel engines is the microscopic particles they emit. This is a reality that, when analyzing the emissions of our cars, we find every day. And the fact is that beyond the nitrogen oxide or CO2 figures, there are the particles, which are by-products of combustion that, installed in our lungs, can cause (and do cause) cancer.

The problem is that, although it is not popularly known, the new direct injection petrol engines also generate microscopic and carcinogenic particles to a good degree. But how many? The truth is that, having no specific limitations on the number of particles to date (in 2015 the new emissions regulations will contemplate them for gasoline engines, although with a big but we analyze after the jump), almost no one had bothered to study the issue. As long as the cars did not exceed the total mass of particulate emissions allowed by Euro 5 (4.5 mg per kilometer traveled), everyone was happy.

Yesterday, TÜV Nord published a study commissioned by Transport & Environment that shed light on these particulate emissions in terms of numbers and left us very concerned.

The results of the study (which you can read here) were obtained from three vehicles equipped with direct injection engines (Ford's one-litre EcoBoost, Hunydai's 1.6 GDi and Renault's 1.2 TCe).

All three vehicles were subjected to the approved (EC) 715/2007 particulate emission test, and all three cars emitted far more particulates than we might have expected.

For those of us who come from technical and engineering backgrounds, these results were "predictable", as the high-pressure combustion that occurs in direct injection engines generates chamber conditions similar to those of diesel vehicles, and it was therefore logical to expect high particulate emission figures. Particulates are also particularly small, increasingly so, due to the type of combustion that now takes place in the engines.

This is not a new study, as in 2012 another one had already been published which, analysing the same type of engines, reached the same conclusions about how harmful direct injection petrol engines are for our health.

The problem is that the European Commission has allowed ten times higher limits for petrol engines than diesel engines in terms of particle numbers until 2017. In 2017 Euro6c comes into force, and this standard already equalises particulate emissions between diesel and petrol, reducing them appreciably.

Of the three engines tested, all three met Euro6b but not Euro6c.

Why are particulates worse by quantity than by mass?

A cursory reading of the emissions regulations can confuse you. Euro 5, introduced in 2009, requires manufacturers to limit the grams of aerosols emitted from the tailpipe. But it is not so much the "total mass" that is harmful, but the type of particles.


The smaller the particles emitted, the easier it is for them to make their way into our respiratory system, becoming anchored in the alveoli of the lungs, and therefore much more likely to cause cancer.

What is the impact of this study?

The conclusions that can be drawn from the study are worrying. Until 2017 when Euro6c comes into force, in the form of Euro6b, we are going to see cars with direct injection petrol engines that will emit 10 times more particulates than diesels being massively marketed, and they will do so legally. In other words, for a period of three years the European Union will keep the door open for manufacturers to sell engines that are clearly harmful to our health.

Is there an alternative?

Yes, and that is probably the most disturbing thing. As is already done in some diesel engines, the management of microscopic particles can be controlled by installing particulate filters.

The use of such particulate filters in direct injection petrol engines would bring emissions down to the Euro6c standard.

Is it expensive or technically complicated to install these particulate filters? No, and that is what is disturbing. Installing such a device in an exhaust system can cost the manufacturer in the order of €60 per car sold.

That manufacturers do not do it already, "because the regulations do not force them" makes it clear that when it comes to talking to huge industries of vehicle production, economic benefit comes before the care of our health.

Wouldn't you prefer your car, for 60 euros more, not to be an emitter of carcinogenic substances? Wouldn't that be more of a priority than having the gear lever knob covered in leather?

At the end of this article, it is worth reflecting for a moment and re-calculating our statements, because "diesel is more harmful because of its particles" is no longer a valid argument in Europe, where it is expected that almost all cars sold will switch to direct injection in a few years.

And I ask myself, don't we, the final customers of cars, have enough strength to put pressure on manufacturers to install particulate filters "from now on" for our health?

The big SUVs are the height of nonsense ❯