And although the engine wasn't a shot nor its behavior was that of a GTI, it was one of those cars with which one likes to flow through the curves at a lively pace, with a high cornering and with very good composure.

Two years later, I've come across another BMW with the same name but which has changed a lot, despite being a mere restyling of the previous version. The biggest change is one that my colleague Javier Costas didn't like at all: the integration of a three-cylinder engine.

But here we don't look at the technical specifications or the brand. Here we value how the cars go and whether we like them or not, regardless of their engine type or mechanical layout. So... what does the new 116d look like? 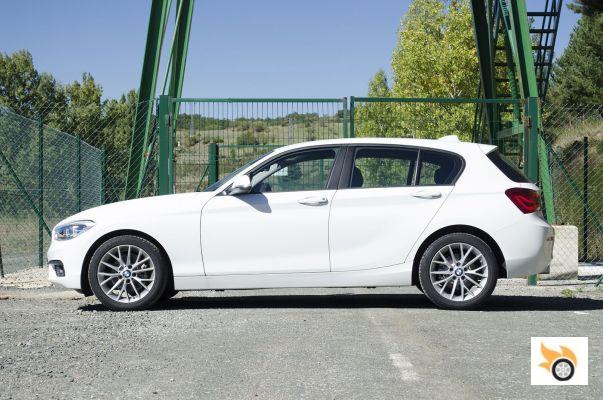 The second generation 1 Series came out ugly, the way it is. It's not something I say, it's something that became evident when Autoblog did a survey and only 16% of readers supported the aesthetics of the car.

In an attempt to solve the problem, BMW changed the front of the car in this restyling, with a design similar to that used in the much more attractive 2 Series.

Despite the changes, the 2 Series' sharper, sharper and more elaborate headlights are still nicer than those of this 1 Series. The coupe's grille is also "angry", frowning, which isn't the case on the 1 Series.

The result is that the 1 Series now no longer has an ugly face, but it's still not as pretty as the range sibling coupe with which it shares so many parts that even in Germany there are tuners that sell the parts to transform the front of your 1 Series to the 2 Series if you want to.


The side view is still strange, because the control of volumes and shapes is complicated when you have a cabin so far back and a hood so flat and long. Again, we can't help but refer back to the 2 Series for a better compromise of shapes. In any case, at least this 1 Series in this side view has always been faithful to its different aesthetics, and does not get confused with its rivals, something to be applauded.

The rear gets new pilots "in L", with more work under the tulip. Personally I will say that here I preferred the pilots before or those of the 2 Series, but hey, to taste ....

I think the aesthetic conclusion is that the car at least is no longer "difficult to look at head-on", having corrected the flaws of the first iteration of this generation. With the "eme" finish it's even attractive, although I'm still more of a fan of the first generation 1 Series. 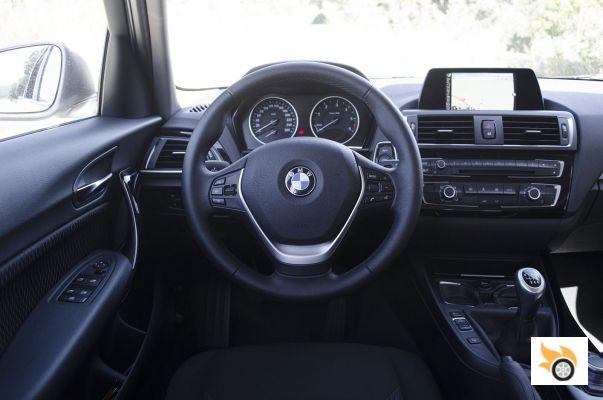 The changes inside are much more subtle. In detail. The quality of the finishes (painted parts, air vent frames) has improved a bit compared to the previous 116d, which gives a touch of distinction. 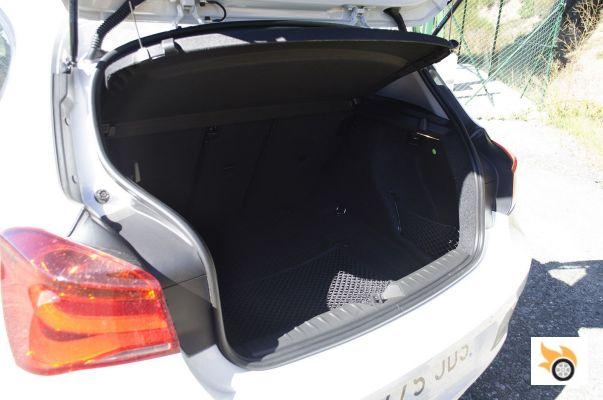 The peccadilloes of the cabin of the current 1 Series are still present. The rear door sills are still small and high compared to the competition, emphasizing the rigidity of the monocoque over ease of access, which then shows its merits when it comes to driving.

The legroom in the rear row is not among the best in the category, while the 360-litre boot is in the lower-middle range of space in the C-segment, although it is very usable in terms of shape. 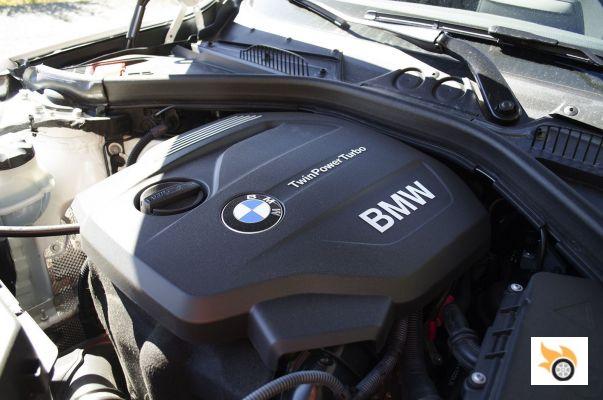 The big change in this restyling has more to do with technology than aesthetics in any case. Where before there was room for a four-cylinder two-litre diesel with 116 hp and 260 Nm of maximum torque, now there is a 1.5-litre three-cylinder that copies the maximum power figure (116 hp as well) and exceeds the previous engine in torque, with 270 Nm. Both engines also have the same range of use, with maximum torque available at 1,750 rpm and maximum power at 4,000 rpm.

The new 1.5 promises a claimed average fuel consumption of 3.7 litres when the old four-cylinder claimed 4.1 litres. Both share many BMW technologies, although the three-cylinder is more modern and advanced in some respects. They are common-rail direct injection, with variable-geometry turbocharging and four valves per cylinder.

The six-ratio gearbox looks identical, while the chassis is updated with new and necessary changes to the spring and damper settings (weight change rules), as well as new bushings, ball joints and elastic mounts that seek to improve, says BMW, the car's ride. 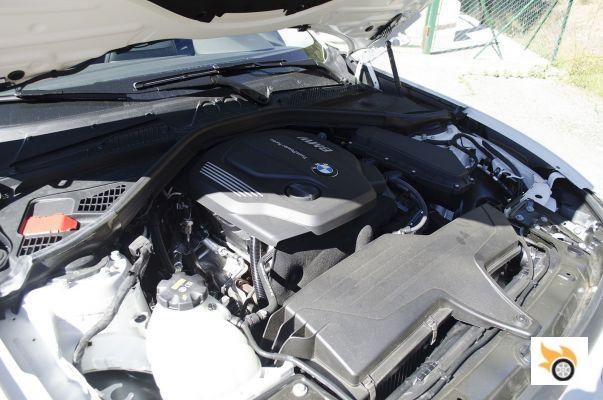 The steel monocoque remains as stiff as before, which is a lot (without having figures in hand, the perception is that it is one of the most if not the most torsionally rigid of the category among the five-door). By the way, despite losing a cylinder, the car declares the same weight as before: 1,395 kilograms. Even the official 0-60 is the same: 10.3 seconds, as is the top speed of 200 km/h. 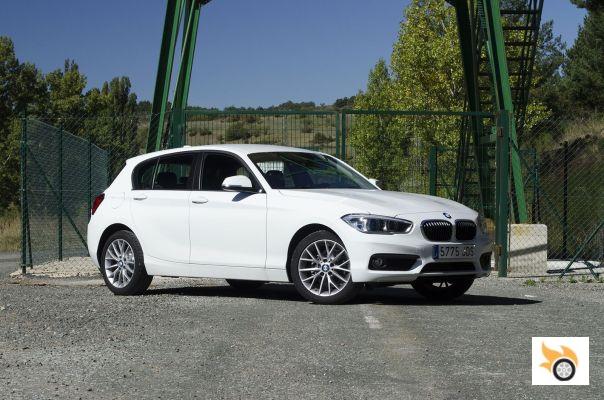 Open the door and you're faced with a car that, if you've tried the pre-restyling model, will feel almost identical to how it was before. Starting the engine does change things somewhat. It vibrates more at idle and sounds worse than the four-cylinder, especially when cold before the engine warms up.

Of course, once it warms up, the standard Start&Stop means you don't have to deal with having the engine running when you stop, which eliminates the vibration problem at idle. The gear lever play is smoother than before, less harsh, and it's still a delight in shifting and gear selection.

In city driving it's still the same car it was before. The engine hardly changes at all, and only when you put your hand on the lever to make a change you can notice some extra vibrations compared to the four-cylinder.

The suspension does feel a little better filtered over small bumps and unevenness of the asphalt in town and on the road, although it does not suffer from soft damping. It should be noted that the 116d we tested two years ago was equipped with Michelin "no run-flat" tyres and this one had Bridgestone RFT tyres, which tends to make the car a bit drier and noisier. But we didn't notice much difference anyway.

When you hit the road and start pushing the right pedal to get the tickle out of the engine, you find yourself with a more than decent car to travel with. Its 80-120 in eight seconds is half a second better than we measured with the previous 116d four-cylinder. The difference is negligible, but it's curious when you've read so much criticism of downsizing. When it comes down to it, when you're overtaking, the 116d isn't fair (any car under 10 seconds in 80-120 starts to be "worthy"), but it's clear that I'd recommend, if you can, going for the 118d, which is clearly quicker.

The fuel consumption was perplexing. During our test of the four-cylinder 116d two years ago we averaged 5.3 litres per 100 kilometres. With the new 116d, which promised to reduce the official average consumption by half a litre, the average consumption during the test week was... 5.3 litres. That's identical to the previous one.

The conclusion is that, although it is true that in the homologation cycle the three-cylinder engine reduces fuel consumption, in real driving the difference is negligible.

And what about the chassis? Well, the changes are few and hardly noticeable when one spends two years between testing the before and after, everything being more conditioned to the change of tyres and rims than anything else. The good thing about the 1 Series is that it is still a great car in terms of balance. It's very neutral, it's not big-headed, the nose wants to go into the corners, and the net lateral cornering grip is very high.

It's not radical or dry. It doesn't bounce over bumps, even under hard braking. But even though it's rear-wheel drive, what you can't expect from it is the over-steering behaviour of a thoroughbred. The 1 Series is the "perfect compact" in terms of handling, because it doesn't oversteer, it doesn't pitch, and it goes through corners cleanly, flowing through them effortlessly, without feeling like the car is choking.

After all, this 1 Series has the same chassis recipe book as the one used as the basis for the M235i, the car that, at the moment, leads our table of best cars tested in Pistonudos, and that had to be noticed. 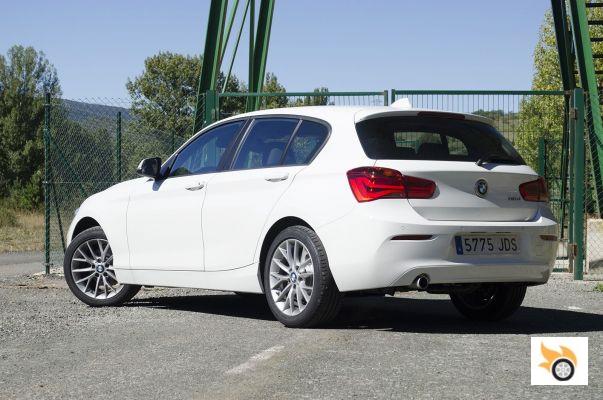 The arrival of the three-cylinder in the 1 Series could have been a revolution, but it wasn't. The new 116d is marginally more powerful. The new 116d is marginally quicker accelerating from 80 to 120 than before, but it uses the same amount of fuel and feels almost the same as the old four-cylinder. It does vibrate slightly more at idle and sounds worse, but the promise of reduced fuel economy in favour of the loss of a cylinder isn't noticeable in real driving.

What is clearly noticeable is that the aesthetics of the front of the car has taken a giant leap forward. If before the 1 Series had a factor to avoid buying it, it was its face, and now it no longer has that problem.

Otherwise, it's still the same 1 Series as before, with a chassis enviable by its rivals and a behaviour beyond any doubt, even if the steering is "mute" and doesn't tell you anything (don't worry, the rest of the chassis' ways do allow you to read the road).

Is it justified to pay 27,150 euros for a compact like this, with 116 diesel horsepower and three cylinders when for the same price you can buy, for example, a 175 horsepower diesel Giulietta with dual clutch gearbox? That's the big question for most customers.

The so-called marquitis pulls a lot, and it is difficult to see how the 1 Series is still much more expensive for the same power than a generalist, or a generalist much more powerful at the same price. It has one thing going for it: it's probably the last five-door BMW compact you'll be able to buy with rear-wheel drive, and its handling and chassis are unrivalled in its power range, as are its trim and equipment options (the LED headlights are a real treat). But if you're looking to get a little more power under your right foot and your wallet won't allow you to go beyond the £27,000 mentioned above, it might be better to go for one of its generalist rivals, sacrificing chassis feel.

Bertone, the failure of beauty ❯