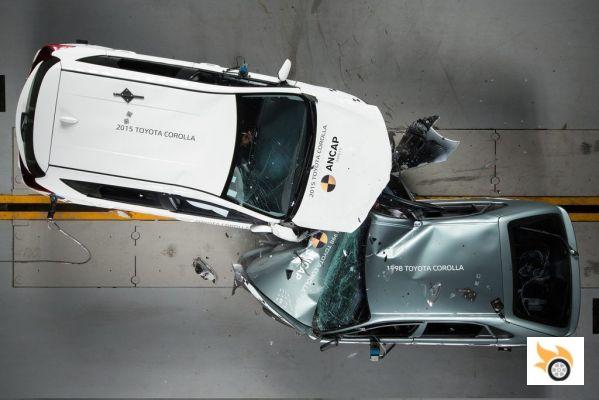 It's a head-on collision at 64 km/h, which simulates the typical head-on accident in which two cars going in opposite directions almost manage to avoid each other and have decelerated enough before colliding. The result is quite clear, the Auris comes out much better off than the Corolla; from one the driver would come out alive, from the other most likely not. We're not talking about a compact car from the third world, nor one made for countries where the lives of the occupants have no apparent value.

The difference in performance between the two cars can be explained by some factors that are not so obvious. For one thing, the technology and engineering has improved substantially in the nearly 20 years since the two models were released, considering that the current Auris dates to 2012 and that generation of the Corolla debuted in 1995. One factor is critical to the performance of the programmed deformation structures: the quality of the steel.

As the metallurgy industry advances, steel specifications are improving. The last few years have seen many models using ultra-high-strength specifications, which are much more robust, reducing weight and increasing the space available for the passenger compartment. If the material is stronger, less of it is used and there is no need to use up so much space with programmed deformation structures.

If we look at the 1998 EuroNCAP results, the same generation Corolla scored three stars. According to ANCAP, the old Corolla gets a 0 (0.4/16), but they are not equivalent because the conditions have been tightened up! Just look at the difference, in the European test back then the roof barely bent, but in the modern Australian test the structure has burst and collapsed, that's why the dummy comes out a wreck. Discarding the expiration effect on the body, which is a car and not a yogurt, it is clear that the simulated collision is not exactly the same (car to car and car to barrier). Second opinion? There is an IIHS video that tested that generation (the body is a sedan) and it doesn't show that much damage to the Corolla E110 either.


I would have liked to see the result of old Corolla vs old Corolla, possibly the structure would have held up better. At the end of the day, the new Auris is much stronger structurally speaking, so the deformation stress has been eaten to a greater degree by the softer car. On the other hand, and not to be ignored, the modern Auris is a slightly heavier car, carries more equipment, has grown up, etc.

Not long ago EuroNCAP also tested an older car, an Austin Metro, against a modern one, a Honda Jazz. Of course, the old English car squirms like butter, but perhaps it wasn't the best example: that car had been designed much earlier, more like in the 80s, because the British were extending the commercial life of their moderlos scandalously. Would a Metro have been the same against a Metro? I doubt it. Anyway, the passive safety of that car was pitiful, EuroNCAP was the final straw and soon after it stopped being sold.

It's obvious that the current model is safer than the old one, it would have bearings if it was the other way round. However, I think you have to distinguish between colliding with a model of equivalent construction technology and another that is much stronger and heavier (or simply stronger). For practical purposes, this is not vital - after all, you can't always choose the year of registration of the car you're going to crash into. However, we should not cause social alarm with the issue of older cars, they are more dangerous, but not that dangerous, you also have to consider how many kilometers they do, on what kind of roads, in what mechanical condition, etc..


Outside of mathematics it is not so easy to find absolute truths.

We analyze the design of the new Volkswagen Polo ❯