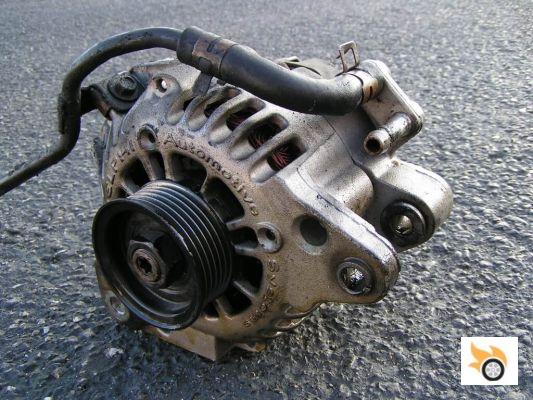 What is the car alternator?

The car alternator is a device that uses the physical law of electromagnetic induction (Faraday Neumann's law for those of you fresh out of high school) to convert mechanical energy into electrical energy.

In the first cars where electronics did not exist, there was no alternator. As soon as electronics appeared, more than a hundred years ago, the need arose to create electricity and store it.

The solution was found by equipping every car with a battery and an alternator to charge it.

In short, the alternator in the car is nothing more than a big dynamo, the same one we used in old motorcycles. It uses the rotation of the engine to generate electricity in the form of alternating current.

This electricity allows us to have air conditioning, heating, control unit, headlights and position lights. This is why the alternator plays a crucial role in modern cars.

Remember that the car battery is only used to store energy, allowing the ignition to be switched off. As soon as the car starts, almost all the electricity is supplied by the alternator, not the battery.

In practice, a failure of the car's alternator causes the entire car to go into "caput", even causing it to shut down while driving.

How does the car alternator work?

As already explained, the car alternator is nothing more than an electromechanical device that converts the mechanical energy of the engine into alternating current.

To do this, it uses the law of physics of electromagnetic induction, also known as Faraday-Neumann.

Cars are just one of the applications of alternators. Almost all the electrical energy we consume is in fact produced through the use of alternators.

Nuclear power plants use the energy of the atom to heat large quantities of water. These generate steam (like the Bialetti mocha at home) which pushes and turns huge turbines which, guess what, thanks to a large alternator produce electricity. We get the idea.

What problems can a car alternator cause?

The car alternator plays the fundamental role of powering the car's electrical system and recharging the battery.

Given the complexity of the car alternator, the causes of problems can be many. However, the fault can arise in two different ways related to the current output voltage:

What are the symptoms of a faulty automatic alternator?

Electrical systems are one of the most complex systems on board modern cars. To give you an idea, every car has several kilometres of electrical wiring on board.


This makes it very complicated to identify the exact problem and increases the cost of the mechanic's man-hours.

However, a faulty alternator can be identified by the following symptoms:

What is the car alternator symbol?

The car alternator doesn't have its own symbol or light, but it shares it with its timeless counterpart, the battery.


For those who don't remember, the battery/alternator light is the red one represented by a square with "+" and "-" inside it.

The battery/alternator light can have multiple meanings, if you see it on you can read our dedicated article.

Some cars indicate problems with the machine's alternator on the electronic display with an indication such as"Generator problems" or"Generator fault", usually followed by "Stop the car and turn off the engine". Generator is actually another way of referring to the alternator. In either case, the problem is definitely the alternator and will need to be replaced.

As with all car repairs, the price of replacing the machine's alternator comes from the cost of the part and the mechanic's man hours.

In principle, a good mechanic should take no more than two hours to remove the old alternator and install the new one. Therefore, the total labour cost should not exceed 100 euros.

On the other hand, it is more complex to establish the price of the spare part, which varies greatly depending on the brand and the place where it is purchased. The price of a new alternator varies between 50 and 400 euros.

Therefore, replacing the alternator will end up costing between 150 and 500 euros.

What to do if the alternator of the machine breaks?

If you find that the alternator of the car is broken the best thing to do is to stop the car and call a tow truck.

You will most likely spend more on a tow truck than on a replacement, but it will be worth it.

Running around with a faulty alternator can break the entire electrical system of the car, and can damage and melt many electronic components.

If the voltage is too high, it can destroy the control unit which, by not adjusting the other components, can cause a chain effect.

Without monitoring the control unit, the damage can spread to mechanical parts, creating thousands of euros of damage.

Therefore, the best thing to do is to call a mechanic and replace the alternator. Nothing else.

add a comment from Car Alternator What is it? How does it work?