As we've been on a roll lately with the volume of technical posts, we're not going to give up this good habit and we're going to explain today how these systems work, and what secrets are hidden behind this possible performance improvement. 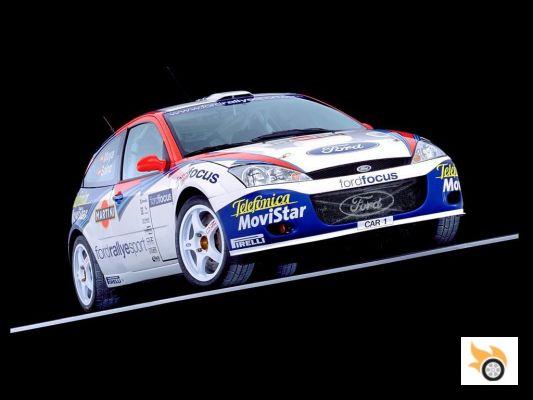 Ford, through M-Sport and Cosworth pioneered this technology in the Focus WRC.

Increasing compression gives you more power, more torque, and better fuel economy. But increasing compression also has its risks, and as we explained the other day, when you reach very high figures, the air-fuel mixture gets so hot that it can ignite by itself before the ideal ignition point of the spark plug spark is reached, which is fatal for the engine. Being an uncontrolled combustion, this is not handled evenly, can cause holes in the piston, broken connecting rods, does not take advantage of all the energy of the fuel, and produces an erratic operation of the propellant.

For these reasons, when working with certain degrees of compression, the spark plug ignition point must be advanced. In other words, the mixture must be ignited voluntarily before the "ideal" point, to avoid detonation.

In this process of advancing the ignition, power is lost and efficiency is lost.

But the guys at M-Sport, allied with Cosworth in the development of the Focus WRC engines, came up with an idea: injecting water into the intake manifold. 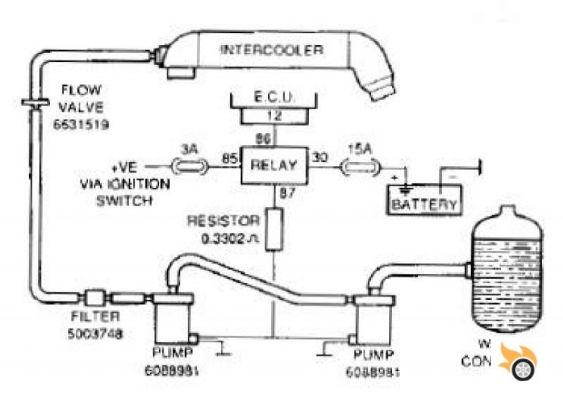 Schematic of the water injection system used by Cosworth

What is achieved by spraying water into the intake manifold? It lowers the effective working temperature inside the cylinder. In this way, when the compression stroke is taking place, some of the energy being built up is dispersed into vaporising that water, reducing the energy available to heat the total mixture inside the cylinder. This makes uncontrolled detonation much less likely.

With no likelihood of uncontrolled detonation, the spark ignition point can be retarded by up to six crankshaft degrees. Direct result? A gain of up to 10 horsepower, or about 3% of the total engine power of a two-litre WRC engine from the Focus era (another day we'll tell you about the real power of the WRC cars of those years, which were well over the regulation 300 hp...). And not only that, you can also work with higher effective pressure in the turbocharger throughout the rev range without fear of the "imminent" chopping, which allows to "fill better" the torque curve.

The ratio of water injection to petrol injection was as high as 0.2 litres of water for every 0.7 litres of fuel consumed, so the water tanks had to be taken into account in the design of the car, as it didn't waste very little.

But what about the problem with the system?

In the World Rally Championship, the water injection system was no longer used for the simple reason that the FIA banned it to avoid making the engines more expensive.


But applying it to road cars as an aftermarket option? Well, here we can talk about two fundamental problems.

As we told you, injecting water "is good" for the engine, as long as it is in an adequate amount, and with a suitable injector, which atomizes it perfectly, creating almost microscopic drops. But taking advantage of the benefits of water injection is not so simple.

The ECU, the electronic brain of your engine, is not designed to work with water injection. So you have to create an "external and auxiliary brain" to work with the water injector in a synchronized way with the petrol injection. Moreover, as your control unit is completely unaware that water is being injected, it cannot "understand" that it can delay the ignition point, so you will not get the advantages of water injection immediately.

So you will be left with no choice but to have a complete reprogramming of the ECU, meant to work with water injection. The problem is that this adds "a fourth dimension" to the engine mapping, as you have to play with one more parameter in deciding the ignition point and deciding how much fuel to inject for the ECU. This fourth dimension is the operation of the water injection. Most probably, because of this, you would have to dispense with the conventional ECU of your engine, and add a Motec or similar programmable one, which in turn, besides being stratospherically expensive, will remove the safety functions of your car (ESP, ABS, controlled catalyst system, and a thousand other things), and will become illegal and unapprovable for a "conventional" street car.


And then there is the other problematic factor. Even if you are able to install and program a complete system, one of the most critical moments is when these water injectors fail. And they often do in the racing world, where they are re-tested. The main failure is when there is no water left in the tank, or when the supply is accidentally cut off. This almost immediately sends the engine into a dive, which, working at very high compression ratios, destroys the pistons and connecting rods within a few revolutions.

To protect against this you have to have a "no fault possible" water injection system, with a level sensor that modifies the ECU programming in terms of ignition and turbocharger pressure as soon as you notice that you are going to run out of water or the system has had a failure in injection.

Ideally, the manufacturer would work on a standard system, with an ECU parameterized for the purpose, and with a water level sensor in the system tank to, in case of failure in the injection of the same, either by failure in the injector, either by lack of fluid in the tank, to instantly reduce the boost pressure to avoid the phenomenon of chopping.

The moral of the story?

Although for racing and competition the water injection system is a great invention that allows you to work with optimal ignition points despite enormous pressures in the combustion chamber, it is not, to this day, a system recommended for "civilian use" cars.

Curiously, in the sixties, and even today, in certain large displacement engines for industrial use, the atomized water injection system was introduced "as standard". Similarly, on the other side of the pond it is a trend in preparations to fit systems that inject a mixture of methanol and water with the same objective as "pure" water injection, incorporating a "fail-safe" system to protect the engine from possible catastrophes. But introducing methanol into the equation is over-complicating the system for a road car, especially knowing that in old Europe these systems cannot be homologated for civilian use, nor can they be used in regulated competitions.

And with the FIA banning the idea, it's not like we're going to see it in racing engines anytime soon...

add a comment of Water injection in supercharged engines