Technique: The more cylinders, the better? 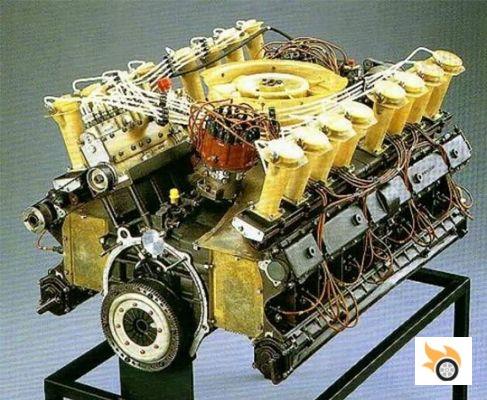 The bore to stroke ratio

The first step for the engineer is to select the unit displacement and the bore to stroke ratio.

But why is an engine with more cylinders better for more power? Let's start with a fixed factor: We are comparing engines with identical total displacement.

Determining the unit displacement of each cylinder will lead you to have to choose the bore to stroke ratio you want for each cylinder.

Originally, the typical design of internal combustion engines, after they were invented, was to have a stroke (the total vertical displacement of the piston) considerably longer than the piston bore. But little by little that ratio changed.

The advantages of a square or super-square engine are that, for the same unit displacement, it offers more available surface area to place the valves. It also offers less friction to the displacement of the piston in its stroke movement. These two factors help these engines to turn at very high revs.

On the other hand, they have a drawback. By having so much diameter, these square or super-square cylinders offer greater thermal losses (less of the energy of the fuel explosion is converted into crankshaft movement), and also worsens the total time required for combustion (the flame front when the gasoline begins to burn has to travel more distance to complete the burning of the entire mixture). The rod end and rod end bearings also suffer more with these designs.

Long-stroke engines, on the other hand, offer a more compact combustion chamber. This means less thermal losses, higher efficiency, but also more friction (more piston travel), and it is not possible to fit such large valves, which limits the engine's rotational speed.

Ultimately, you have to find a middle ground in engines, dictated by the target customer who is going to use the car. Square or super-square engines are aimed at performance cars, while long-stroke engines fit better in cars where the customer is looking for more torque, more efficiency, and less throttle response.


And now we move on to counting cylinders

The point is that when you are looking for the maximum possible power, you have to go, as we have already explained, to a short-stroke engine, a super-square design engine. This prioritizes the size of the cylinder head, in order to make the cylinder breathe better and reduce friction.

As there is a limitation for the maximum diameter that can be assumed by a piston for reasons of time it takes to burn the mixture on a piston too large unless it is fixed by using several spark plugs per cylinder, to find the maximum power for a given displacement engineers are forced to maintain the relationship between diameter and stroke, without falling into a long stroke engine, not to lose power by using all the available displacement.

This leads them to have to add more cylinders. In the case of the example I have put on the table, the design engineer who wants to make an ultra-powerful 2.5 liter engine, will seek to use the optimal bore to stroke ratio in search of power (1.2 times larger bore than stroke, for commercial engines powered by regular gasoline). Limited by the maximum admissible diameter for a piston (about 92 millimetres approximately), the engineer will opt for cylinders of about half a litre (the standard size, say, assuming a stroke of about 76.6 millimetres), which would lead him to opt for five cylinders as the best solution for a 2.5-litre engine.

With this approach, the design of this supposed engine would already be defined, and focused on power. But what if we change the number of cylinders?


If this engineer wanted to opt for a more powerful engine, the best solution to find that extra power is to make the engine spin faster. Remember, from when we explained what power was (here) and what torque was (here), that power is the result of the engine torque multiplied by the number of turns the crankshaft turns per unit of time (revolutions per minute, for example).

There are numbers in engineering that are known as the practical limits at which things start to go wrong. As a general rule, we know that a piston should never exceed a maximum linear velocity of 25 meters per second. If you go beyond that, things start to go wrong, the crankshaft, the connecting rod and the piston start to deform, they can touch the cylinder head, the valves... In short, it's a disaster.

To stay below 25 meters per second, what you have to limit is the amount of stroke that the pistons have. As you can already think, if we reduce the stroke, as the piston diameter is directly related to it (by the figure of 1.2 in our example case), we will have to reduce the unit displacement of each cylinder.

An engine with many cylinders and a large bore in relation to a short stroke offers a high rotational speed, and that means more power.

Therefore, if we reduce the unit displacement, this will lead us to have more cylinders to get up to 2.5 liters. In the end, what do we gain from this? Well, we have all the pistons moving at less than 25 meters per second, but with the engine turning more times every minute.

As we have, in theory, the same torque for the sum of the combustions of all the cylinders than we had before, we get more power for a given displacement.

But be careful, it has a trick. You might think that this is a panacea, but having more cylinders implies other negative aspects, related to efficiency. The more cylinders you have for a given displacement, the more friction and heat loss the engine has, so the torque extracted from that displacement is lower than would be achieved with fewer cylinders. The air and fuel burned is used less well.

Of course, when you are looking for power this is secondary: You don't care if you get less torque per crankshaft rotation, if in exchange you are able to get more crankshaft revolutions per minute. For example, it's better to get only 100 Nm of torque out of the engine but have 800 hp of maximum power, than to have 400 Nm of torque but only 150 hp if you're looking for power.

If we turn the tortilla, and what we are looking for is the maximum possible energy efficiency, what we are interested in is to burn better the gasoline we put on the cylinders. This then implies opting for an engine that has less friction. And less friction means fewer cylinders.

Again, there's a limit to all this. You might think that then the two and a half litre single cylinder engine would be the most efficient engine possible for 2.5 litre displacement, and it's not. The limitations in this regard are in areas such as vibration and derived inertias. The more cylinders an engine has, the more explosions occur per crankshaft revolution, but of lower intensity.

If you divide the explosions that occur per crankshaft revolution into a greater amount, even if they are of less intensity, you get the engine to vibrate less, to be more balanced, to be smoother in its operation.

As with almost everything in life, virtue lies in the middle ground, and to find it, there are a series of figures well known to engineers

As everything in this life, being eclectic is the virtue. We must not go to extremes. There are a series of "common knowledge" rules for engineers that eventually end up being applied.

For example, every good engine designer knows that going beyond 92 millimeters for piston diameter is not a good idea. He also knows the maximum linear speed of the piston (25 meters per second), the optimum ratio between bore and stroke for a performance engine (1.2) and that of a torque-focused engine (0.8, for the faint-hearted). Unit cylinder displacements (between 0.4 and 0.5 litres) are also a well-known industry standard.

All of this makes the production engines almost always look like "carbon copies" in certain dimensions. Then, when things are taken to extremes such as in racing, you can see true works of engineering, such as the twelve-cylinder three-litre engines, or the six-cylinder engines used by Honda in motorcycles, in search of performance limits, at the expense of fuel consumption.

By the way, if this engineer had to make a performance two and a half litre naturally aspirated engine tomorrow, he'd go for a five-cylinder. And now that you've read the reasons, you would too, wouldn't you?

add a comment of Technique: The more cylinders, the better?