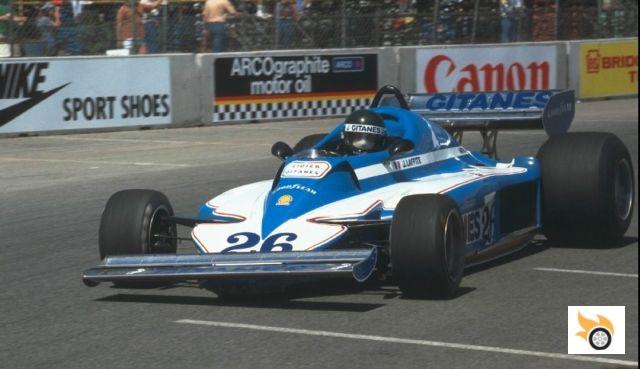 Of course, Ligier also had sponsors... French, of course. Gitanes' Flemish dancer was more French than the croissant, and looked wonderful against the blue of the cars. The flamboyant 1976 Ligier JS5 - with its thunderous Matra V12 engine - wouldn't have been as eye-catching without that sultry black silhouette on the side of the massive air intake.

The technicians were also more French than the Eiffel Tower, with Gérard Ducarouge and Michel Tétu at the helm.

And the drivers... the Ligier drivers were -most of them- as French as Louis de Funès. One above all, Jacques Laffite, Ligier driver from 1976 to 1982 - the first three years, alone - and in 1985 and 1986, when his F1 career ended abruptly when he broke his legs in the first start of the British GP at Brands Hatch, the day he equaled Graham Hill's record of 176 Grand Prix races.

Ligier's next signing was Patrick Depailler, followed by Didier Pironi, Jean-Pierre Jarier, René Arnoux... until the promising Olivier Panis, who made his F1 debut with Ligier and gave his last day of glory to the team, at the 1996 Monaco GP.

By then, however, Ligier was no longer the boss of the team that bore his name. In 1992 he handed it over to former AGS owner Cyril de Rouvre, then Flavio Briatore, and in 1997 the team changed its name with the arrival of four-time world champion Alain Prost as owner.

Between the 1970s and the 1980s, Ligier was a very respectable team, with eight victories, six of them thanks to Laffite.

Guy Ligier started work as a butcher's apprentice, then became a public works entrepreneur, and in between was a great sportsman. At the age of 17 he was French rowing champion, a sport he combined with rugby, and at 19, French 500cc champion.


In 1963 he switched to cars, together with his great friend Jo Schlesser. They used to say that they drove "coffins on wheels", and maybe that's why their dream was to build their own racing car. They started a small company, but Schlesser was killed on his F1 debut with Honda at the 1968 French GP in Rouen, and Guy then abandoned his racing career, which had already taken him all the way to F1.

At the 1969 Paris Motor Show, Ligier presented the JS1 saloon (the acronym was a tribute to his fallen friend), and in 1976 the aforementioned JS5 arrived, with which the Ligier team made its F1 debut.

Between the 70s and the 80s, Ligier was a very respectable team, with eight victories -six of them thanks to Laffite-, nine pole positions and eleven best race laps. The turbo era, in the mid 80's, started to accelerate the decline of the team, which experienced a last flash of glory in that extraordinary Monaco GP in '96.

Ligier experienced the height of its prestige and influence in the early 1980s, when François Mitterrand became President of the Republic. Ligier - says Max Mosley in his memoirs - was a loyal friend of his, and had been the French politician's chauffeur and bodyguard in the early 60's, when the future president was at a low point.


Ligier's influence was decisive in the move of the French GP from the Paul Ricard to the remodelled Magny-Cours in 1991. Of course, the Musée Ligier is located in an attractive pyramid-shaped building at the Circuit de Nevers.

In this museum they explain us that there is not a single example of that exceptional car with the high air intake with which Ligier was introduced in F1.

Nor are there any more teams -or bosses- like Guy Ligier. French like the champagne he so often tasted.

Group B, the meteor that lit up rallying history ❯