Pistonudos offers you a brief historical review of the Group B phenomenon, so that it is not said that rallying is "asleep" in our house.

The permissive Group B regulations were the breeding ground for a perfect storm that raised the level of rallying's popularity to unimaginable heights. Not only were the cars powerful contraptions that performed as ferociously as they looked, but the competitions themselves were also tremendous challenges that tested machines and racers alike. 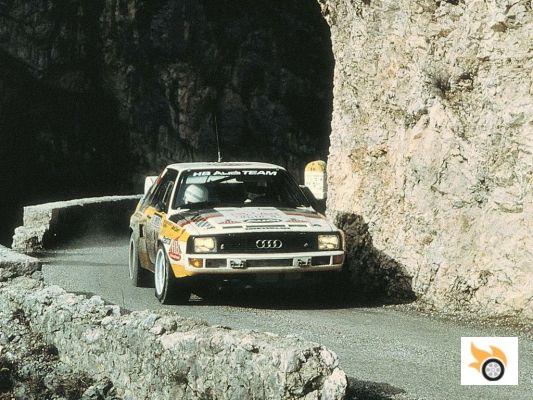 Those rallies, those cars and those drivers are still remembered with excitement.

Today, the World Cup rallies are held over the weekend and invariably finish with a final stage on Sunday lunchtime to allow for television broadcasting. The total number of timed kilometres varies between 300 and 350. As for the cars in the top category, RC1, they deliver around 300 hp and weigh 1,200 kg, with paddles on the steering wheel to change gear.

In the short-lived period - the legend of Group B does not even cover 10% of the history of world rallying - each event had its own characteristic appearance, and the routes were marathon, with timed mileage ranging from the 500 km of the Finnish Thousand Lakes - this year's edition, which takes place this weekend, will have 320 km - to the more than 1,000 km of Corsica or Argentina.

And the cars... The cars were the bomb, literally.

The 1985 Audi Sport Quattro E2 was a prototype riddled with monstrous aerodynamic appendages that threw out more than 500 hp for a weight of about 1,000 kg, with an H-shift and three pedals. It accelerated to 100 mph from a standstill in 2.6 seconds; within 10 seconds it was flying at 200 km/h, on dirt tracks, narrow roads or snow-covered pavements. 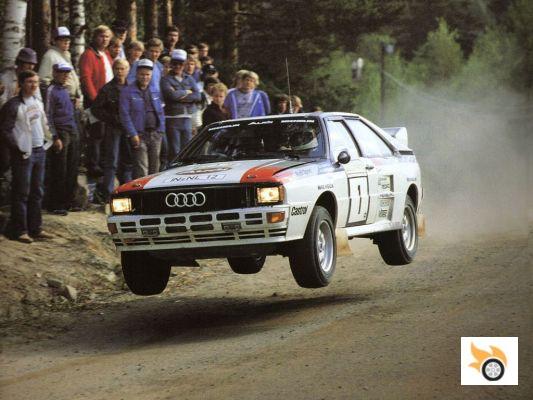 The advent of Group B coincided with the arrival of two innovations that the FIA had not counted on: four-wheel drive and turbocharging.

The FIA stipulated that the marque had to produce a series of 200 examples, with the idea being that sports car manufacturers could homologate their exotic cars in Group B. But the regulations also allowed the homologation of evolutions for which it was sufficient to produce 20 examples, and through this loophole the issue started to get out of hand (the "stradale" version of the Lancia Delta S4 was credited with 250 hp and 1,200 kg of weight; the racing evolution, 450 and 890, respectively).

So it was the generalist manufacturers who eagerly pounced on a regulation that was so appetising because of the freedom it allowed. To make matters worse, the arrival of Group B coincided with the irruption of two innovations that the FIA had not counted on: four-wheel drive and turbocharging.

In fact, all-wheel drive was expressly forbidden in rallying, until the end of the 70s when Audi requested its authorization. No one objected - perhaps the other brands thought that the Ingolstadt intended to run with a derivative of the Volkswagen Iltis - and in 1980 the brand of the four rings presented the Quattro with turbocharged engine and announced that it would compete with him in the rallies, initially in Group 4. The path for the future of Group B was set. 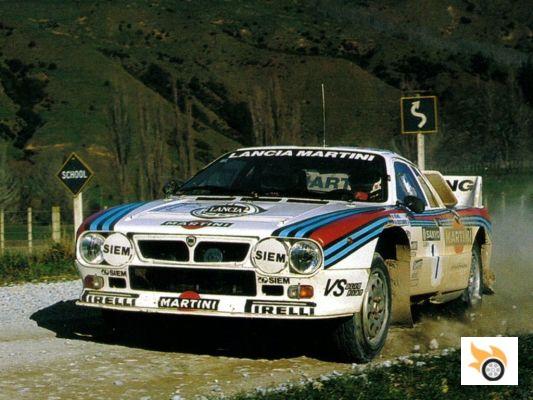 With the experience of having created the legendary Stratos, Lancia was the other brand that bet on Group B from the beginning.

Lancia was the other brand that made a commitment to Group B from the very beginning. With the experience of having created the legendary Lancia Stratos in the 1970s - a car designed solely and exclusively to compete in rallies - the Turin-based brand took off with the 037, based on the Lancia Beta Montecarlo of endurance racing. The problem was that the gestation of the car began before it had become clear that four-wheel drive was an absolute must to win. Originally, Group B was supposed to come into force in 1982, and that year Lancia had its 037 ready.

With rear-wheel drive and volumetric compressor instead of turbo, the car was only really competitive during the first year of Group B, in 1983, when its only rival was the first evolution of the Audi Quattro. Lancia won the marque world championship, and Hannu Mikkola took the drivers' title in an Audi.

Behind the scenes, however, the real revolution was already underway. In December 1981, Peugeot had announced that it was going to make an all-wheel drive Group B based on a production car. The new 205 was chosen, but when it came to creating its prototype, the French brand combined the best of both worlds: the Audi's 4×4 traction and the Lancia's central engine placement.

Peugeot broke the deck with the 205 Turbo 16, which combined the all-wheel drive of the Quattro with the central placement of the 037 engine.

When the 205 Turbo 16 appeared at the 1984 Tour de Corse, it rendered the Quattro obsolete in one fell swoop. To a certain extent, the German marque had respected the spirit of the Group B and its cars were based on the mechanical layout of the production model, with the engine positioned at the front. Peugeot broke the mould with the 205 Turbo 16. Audi was still champion in 1984, but the last two years of Group B were the preserve of the lion brand, with a car that was much more balanced and agile than the heavy Quattro.


Lancia began to work at full speed on what would be the definitive Group B, the all-wheel drive Delta S4, but paid dearly for the delay in its conception. The car did not make its debut until the last race of 1985. It won, but the end of Group B was just around the corner.

Paradoxically, Lancia was the first brand to bet on Group B and the one that suffered the hardest from the tragedies that marked the category's vital trajectory.

In 1985, Italian ace Attilio Bettega was killed in the Tour de Corse in an 037. Far from being interpreted as a warning to contain the category's momentum, the event was attributed to fatality: a tree penetrated the cockpit and killed the driver. In the same race, Ari Vatanen also crashed his 205 Turbo 16 and escaped unhurt, a sign that the cars were safe.

But they weren't. Or, at least, they could have been safer. 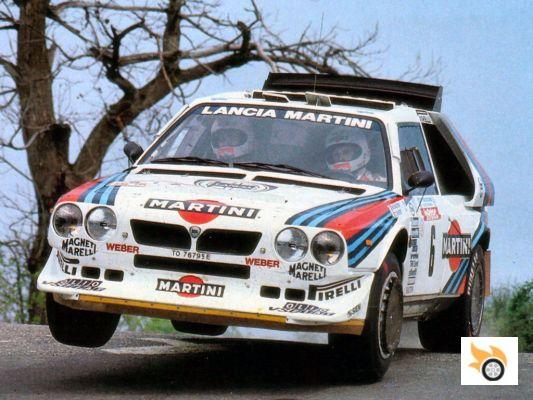 The disaster that ended Group B took place the following year in the same place: Corsica. At the wheel of the Delta S4, Henri Toivonen went off the road when he was leading the race by five minutes. It was an accident like so many others, but the fuel tanks - placed under the crew's seats - broke and the car burned without fail. Toivonen and his co-driver Sergio Cresto could do nothing.

The best performer in Group B was dead. Henri Toivonen had won the debut of the Delta S4 in 1985, and in the first event of 1986, the famous Monte Carlo rally, he had beaten the Peugeots and Audis, despite leaving the car damaged in an accident with a spectator's car on a liaison. In Sweden, he broke his engine when he was leading. And then came Corsica.

Before that, the rally of Portugal had been held, which ended with the withdrawal of all the official drivers due to the lack of public control on the stages. Local driver Joaquim Santos was driving one of the new Ford RS200s when he went off the road when he saw people crossing the road on one of the crowded asphalt sections in the Sintra area. The car ploughed into the spectators, tragically leaving four dead and more than thirty injured.

The drivers stood up. Not because of the intrinsic danger of the cars but because of the lack of public control measures, an inherent problem of the rallies that would not begin to be channeled until five years later.

Audi withdrew from the championship with immediate effect, but Group B continued. 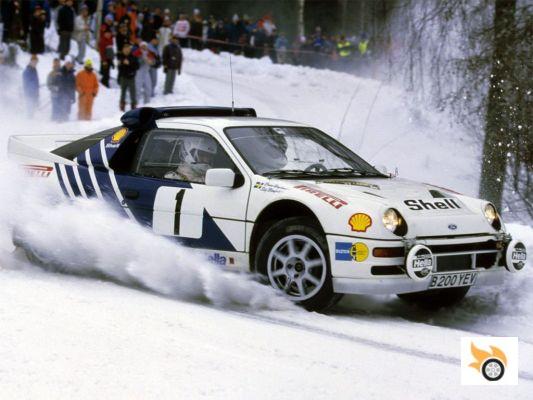 After the Group A hiatus, the Group B philosophy took over in 1997 with the new WRC category.

Peugeot sued the FIA, lost and went on to win with the 205 Turbo 16 in the Paris-Dakar, which was open to the prototype competition.

Curiously, the success that eluded Lancia during the final years of Group B smiled on it with the rise of Group A. The Italian marque won six marque titles. The Italian brand won six consecutive brand titles with successive evolutions of the Delta HF, taking advantage of the scarce competition from brands with a turbocharged 4×4 in the catalogue, as the Group A had to be series derivatives.

The real takeover of the Group B philosophy came in 1997 with the new WRC category - the latest iteration of which will see the light of day in 2017 - which allowed any manufacturer to incorporate all-wheel drive and turbocharging into a production car to compete in the world championship.

But that's another story. Group B's ended when its shooting star was extinguished on a corner in Corsica.

add a comment of Group B, the meteor that lit up rallying history