But the problem is that when you get the money out of television, you have to create a mass show. And a mass spectacle can't be technical, advanced or complicated. It has to be "spectacle for spectacle's sake". That's how you can understand the perpetual struggle between the people (riff-raff) of the FOM, the minions, as I say, of Ecclestone, to turn the F1 championship into a sort of one-make cup, while brands and teams seek to keep some technical stuff involved, to show that their engineering "is better", or at least, they have more money to spend on it.

And while the F1 model is becoming obsolete, where the TV channels are no longer willing to pay what Ecclestone and his people are asking for (which in the medium term may put the championship in doubt), the reality is that little by little the endurance world championship is eating up relevance and space.

Not because of millionaire audiences. Not because of the distribution of television rights. The beauty of the WEC is that it is a championship that revolves around the ACO and Le Mans, and where the competing brands are already responsible for themselves (with greater or lesser success) to publicize their participation and successes. So the organisers don't have the pressure of having to develop a technically rigid championship in search of artificial competitiveness. 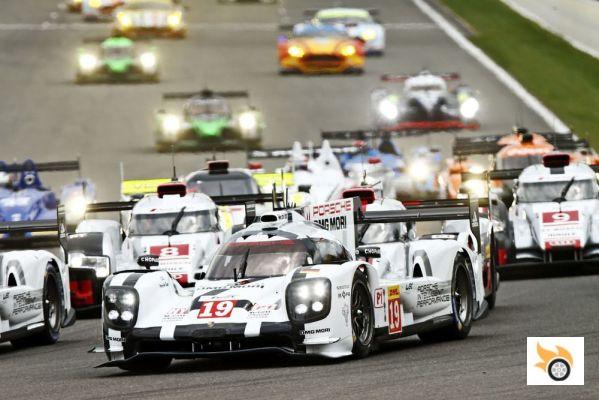 Spa left us a race of power to power where Audi repeated victory for the second time in the season, by a small margin over the very fast Porsche.

Under a simple maxim of energy control (fuel volume used in the end), the ACO has created a championship where manufacturers feel particularly comfortable, and where the show is served.


Without arriving yet to the main event of this year's calendar, we have already seen the Spa race, where Porsche and Audi raced with the aerodynamic configuration of Le Mans, and where we have seen a race with fights from power to power, a foretaste of what we will have in France next month.

Porsche debuts this year a 919 that, although it looks a lot like last year's car, is practically a new car from the inside out, with a completely new one-piece chassis, a completely revised engine and a new hybrid system with new A123 Systems batteries, which allow it to play in the category of maximum recovery and energy delivery per lap (8 MJ).

The fact is that the Porsche, at one lap, was faster than Audi and Toyota. The race promised a lot in that sense, but the lap-to-lap showed the typical reality in endurance. The R18 e-tron has a higher average lap speed over the course of the stints. The R18 takes better care of its tyres, as demonstrated by the fact that, when the average time of the double stints done with each set of tyres was taken, it was faster than the Porsche.

The 919s were better as soon as they changed tyres, but then their pace went down. Also, the R18 seemed marginally more fuel efficient, although it seems that with Porsche playing with the 8MJ, there is an advantage for Stuttgart over Ingolstadt. 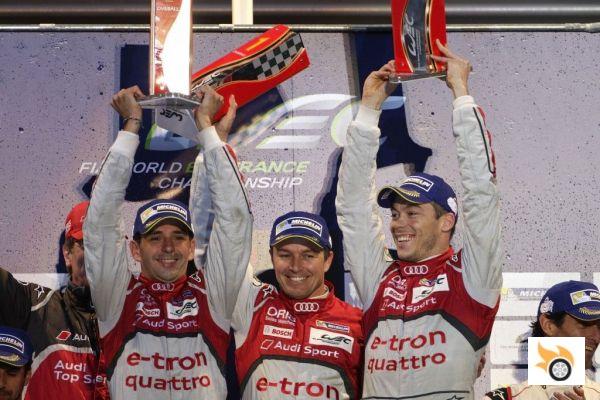 In the end, victory for the R18 number #7, driven masterfully by Andre Lotterer (who arrived at the circuit driving his beautiful red Audi quattro), Benoit Treluyer and Marcel Fassler, with only 13 seconds ahead of the 919 of Marc Lieb, Romain Dumas and Neel Jani. What's really important? Well, we saw two cars that technically have nothing to do with each other, fighting in a thrilling thriller, full of tension, strategy and desire, which hooked the viewers who really wanted to see car racing. It is clear that in the eyes of a mass of spectators, the WEC is too complex, but these races are worth more, where the "real" fan can enjoy, and the brands can boast and make "value and brand image", instead of a strange championship, adulterated, designed to please "everyone" and that in the end "leaves everyone unsatisfied". Put it down to it, Mr. Ecclestone.


The final key to victory was in the fact that in the last stop, in the final stretch of the race, the Audi #7 was also marked a third stint with the tires already on, which allowed him to maintain the time advantage with the Porsche. 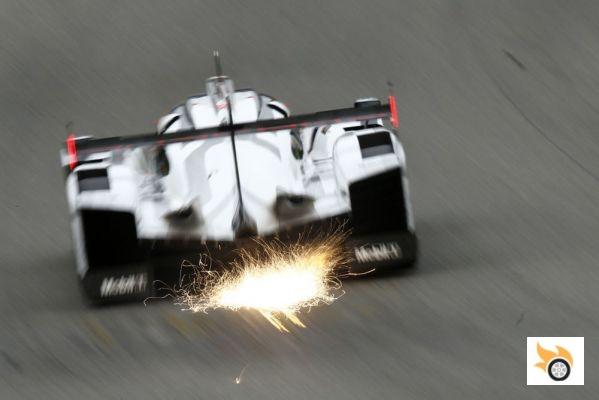 Le Mans is presented with many doubts, but it seems that Audi has for itself the management of tire consumption, Porsche speed on a lap, and Toyota too many problems to aspire to victory.

Meanwhile, Toyota had a horrible weekend, with Nakajima cracking his vertebrae in practice, and with a TS040 that is suffering a lot. Although it is true that they have not yet shown all their cards, running with a higher downforce aerodynamic configuration, instead of the Le Mans one. The truth is that the rest of the competitors have improved their cars a lot, and Toyota seems to have been left behind.


Be that as it may, Le Mans remains an unknown quantity. It seems that we will see the familiar storyline of Audi playing with strategy and a fast and consistent car, while Porsche plays with a slightly faster but more destructive car with the wheels. The rain will be a vital factor here, as it will be what will mark if Audi can take advantage of its pace of tire consumption, or Porsche has the option to liquidate it. Will Toyota have a trick up its sleeve? Let's hope so...

The segment division among SUVs ❯

How big are the batteries and storage units of the Le Mans cars?