Oil light on: what to do to protect the engine?

What does the red oil light mean? 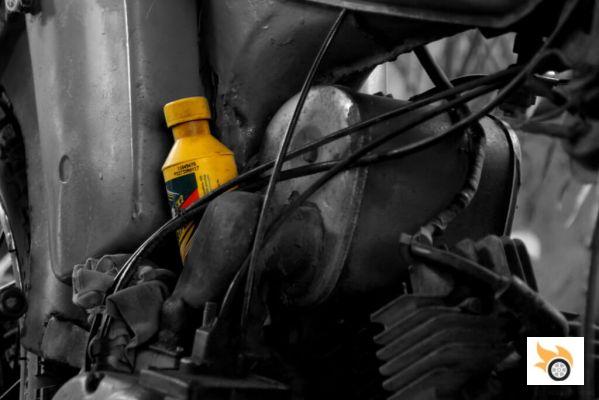 The red engine oil warning light is perhaps one of the most important lights in the entire car. This is due to the fact that without proper lubrication the engine tends to destroy itself due to the friction generated by the moving internal metal components.

For more creative people this light is often reminiscent of the typical aladdin's lamp because it represents an oiler, very similar to the old oil lamps. It comes on when a pressure drop is detected in the engine lubrication system. Most likely there is a leak in the system or you have forgotten to top up the oil which, over time, has fallen below the minimum safe level.

What is engine oil for?

Is motor oil the most important fluid in your car, apart from petrol, without which you won't get very far? Joking aside, oil plays the crucial role of lubricating and protecting the internal components of the engine. These components operate under extreme friction and pressure and without good lubrication would be damaged after only a few miles.

Let's not forget that the engine (at least in internal combustion vehicles) serves to contain a real explosion, taming its energy and using it to move the pistons that in turn push our car.

The oil itself must have the right viscosity. To identify the right one for your car, just read the owner's manual, almost always located in the glove box in front of the front passenger seat of your car.

The oil warning light is an essential aid, but you should never see it come on. To avoid having an oil warning light on, simply perform an accurate oil change according to the parent company's maintenance schedules.

What to do if the engine oil warning light is on?

The procedure to follow when the oil light is on is very simple but must be followed to the letter. Let's see what to do with the engine oil light on:

In this case you will understand why it is important to know when to change the oil and especially to remember when to do it. It may seem trivial, but a simple oil change, costing a few tens of euros, done according to the car's maintenance schedule, saves thousands of euros in the long run.

What to do if the oil light stays on after topping up?

The best thing to do is to contact a mechanic immediately and have him take you to him with a tow truck. You can be sure that the cost of calling a tow truck is nothing compared to the damage caused by an unlubricated engine.

Never, and let's say never, say "just a few miles home" and get back on the road. If the engine is not properly lubricated it will only take a few minutes to irreparably damage its mechanical components. This will set you back a lot of money for an expensive repair, if not even the replacement of the entire engine.

Oil light came on and head gasket burned out

Among the various problems that result in an oil warning light, there is one that every motorist dreads. This is the burnt headgasket.

The engine head gasket ensures the perfect seal of the power unit which, as we said before, must contain real explosions. If the gasket wears too much until it breaks, there may be coolant or engine oil leaks.

Our advice is to always be on the lookout for possible symptoms of a burnt head gasket, including the oil warning light coming on. If any of these symptoms occur, it's best to call a mechanic to pick you up with a tow truck immediately.

What does it mean if the oil light comes on and goes out?

It's best to act as if the warning light is indicating a problem with the engine oil. Let's go to the mechanic to have the engine oil inspected. This is a few minutes intervention that could save our car's engine.

Brake light on: what to do and what are the causes? ❯

add a comment from Oil light on: what to do to protect the engine?