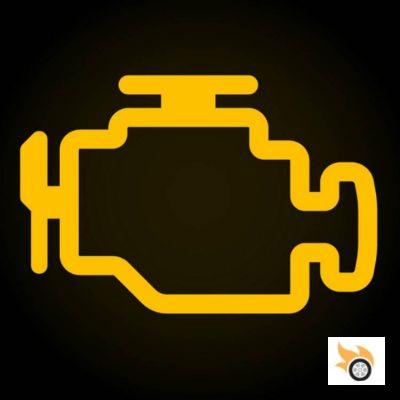 What is the general misfire engine light?

Since 2002, a new warning light has appeared on the dashboards of all cars: the yellow misfire light, also called the generic misfire light or simply the engine warning light. It was introduced 18 years ago with the coming into force of the new European emission and pollution laws.

Along with many other lights, the misfire light illuminates for a few seconds on the dashboard every time you turnthe car keys. This is not a problem as it is a simple check of the operation of the lights, but the problem arises if the misfire light stays on or flashes.

What does it mean when the misfire light is on?

The misfire light should not be underestimated at all, although in most cases it does not indicate fatal problems for the car.

Unlike other warning lights that indicate a specific problem (such as low oil level when the oil warning light is on) the misfire light is called "generic" because it can refer to different types of problems.

The engine misfire warning light is almost always on because of:


On newer cars, the engine misfire warning light is almost always accompanied by the message "Turn engine off" along with a fault code that makes it clear which component is not working.

If the misfire light is on and the car has started to lose power, with performance well below normal, the emergency mode will probably be activated. This is a standard procedure that the car activates to prevent serious damage to the engine in the event of a component failure.

What should I do when the engine malfunction light is on?

When the misfire light is on, the best advice we can give is to go straight to the nearest garage or mechanic to have the damage diagnosed and "crash" before it gets worse. Postponing or underestimating the misfire engine light can only cause a worsening of the current problem and increased repair costs.

As mentioned above, if the engine misfire warning light came on while driving and we noticed a sudden drop in engine performance, the emergency mode is definitely activated. This way the car tries to contain the damage and at the same time allows us to get to a mechanic and not stand still on the road.

But don't be fooled by the car's emergency mode. The problem has been detected and every kilometre could make the situation worse, our advice is still to stop and call a tow truck so as not to worsen the car's condition. This is even more true when you are on the road. It is better to wait an hour for the tow truck and limit the damage, allowing faster maintenance than driving, aggravate the situation and have to leave the car for days with serious damage from the mechanic.


When the engine misfire warning light comes on, it indicates that there is a problem, so it is wise not to ignore it.

What should I do with the engine misfire warning light on?

Another possible cause of a solid misfire warning light is the presence of the wrong fuel in the fuel tank. You can refuel if you have a diesel engine and vice versa. In this case it is best to stop the car and call for roadside assistance.

If the fixed engine misfire light does not go out, we advise you to turn off the car, wait a few seconds and turn it on again. If the light stays on, it is best to call a mechanic.

Flashing engine misfire light - what to do?

The catalytic converter failure is caused by the lambda sensor at the beginning of the muffler sending incorrect data on the oxygen concentration in the exhaust gas. These measurements are normally sent to the control unit which analyses them and then adjusts the correct amount of petrol to be injected into the cylinders to ensure an optimum air/fuel ratio. If the data is incorrect, fuel consumption and CO2 emissions increase and the cylinders operate in sub-optimal conditions.


The consequence of all this is that a simple catalytic converter error can cause even serious damage to the innermost parts of the engine. The advice is to stop the car immediately and call a tow truck for help. Unless you are in close proximity to a mechanic, driving with the misfire light flashing will cause further engine damage.

What happens if I drive with the check engine light on?

By driving with the engine misfire warning light on, even in emergency mode and with visibly reduced performance, you risk serious damage to the car 's engine. It is not advisable to try your luck by saying "it's only a short distance away" or "the garage is just around the corner".

Unfortunately, it only takes a few kilometres to damage the engine and end up paying thousands of euros in garage damage. The extent of the problem then depends on whether the indicator light is on, whether it is steady or flashing. Let's see how to react in the two cases where the misfire light is on.

Can I drive with the engine malfunction lamp fixed?

Since the steady engine misfire warning light indicates engine or fuel supply problems, you can drive to the nearest mechanic and have the fuel system adjusted. The best advice is always to call a tow truck for help to avoid possible engine damage.

Remember that the car is still in a critical state and therefore you should adopt "emergency" driving. No overtaking, sudden acceleration or steep climbs. Any stress or overload could prove fatal to the engine. Imagine helping a person who has a heart attack in progress, you would never advise them to run down the hospital stairs. The same goes for your car, with the check engine light de-energized and straight to the mechanic.

Can you drive with the misfire light flashing?

With the check engine light flashing it is the same as before, the best thing to do is to call for a tow truck so as not to make the conditions worse.

However, if we are in critical conditions or lost in the middle of nowhere, then it may be necessary to drive the car at low revs. The less strain we put on the engine, the better.

If proceeding slowly it is advisable to turn on all four arrows to signal to other drivers that we are driving a faulty vehicle and avoid unpleasant accidents. If the engine failure light is flashing, it is best to go immediately to the nearest garage or, to be on the safe side, have it picked up by a tow truck.

How do I turn off the engine warning light?

The only way to turn off the engine warning light is to go to the mechanic and have the car diagnosed and the faults that cause the check engine light to illuminate repaired.

There may also be no problem outside of a simple blown fuse or blown ECU. However, the flashing of the engine misfire warning light or its constancy should never be underestimated as a symptom of an engine problem. The condition of the engine should be checked immediately before using the vehicle again.

If you are sure there is no real problem and the engine misfire light has come on by mistake, you can also reset the ECU messages. This reset is usually done with a "Mode 1" button, which is usually located under the instrument panel. With the Mode 1 button you can reset or turn off the engine fault light of all Fiat, Mercedes, Smart, Opel, Audi and Peugeot cars.

What happens when the engine light flashes?

When the service engine light flashes, it's a sign that the vehicle needs immediate attention.
It could be an essential malfunction with the emission control system or the engine, or something as simple as a loose gas cap.

What does engine failure light mean?

The engine failure light signals the problems that the vehicle has at a given moment.
For this, your car's control unit has multiple sensors distributed throughout the vehicle that will indicate the levels of the vehicle and if any kind of problem has been detected in its operation.
19 oct two thousand eighteen

What to do if the engine trouble light comes on?

Each and every manufacturer states the same thing if the engine failure light comes on: "Go to an in-house workshop".
There they have diagnostic machines that literally ask the car's control unit what specific fault it has detected.

What does fault indicator light mean?

The lights that signal faults, or MILs, refer to a more difficult computer-controlled system.
Typically, it requires testing by a technician to determine the precise nature of the fault and repair if necessary.
20 ago two thousand seven

The cabin filter: when should it be changed and how much does it cost? ❯

add a comment of Engine malfunction indicator light: what to do if it is on / blinking