Sliding clamp? Here are the causes and what to do. 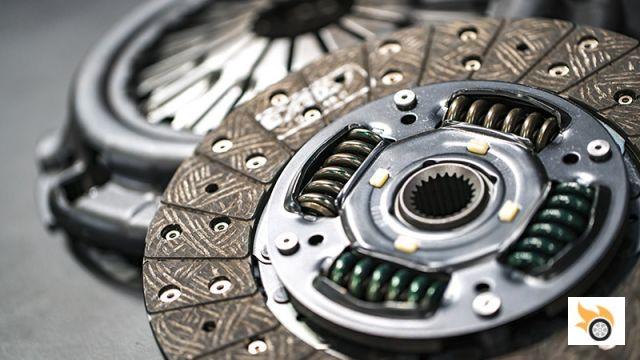 What is the clutch of the car?

To understand what is meant by a slipping clutch, you must first explain what actually is the clutch. The clutch is one of the main components of the car, responsible for the separation between the engine and transmission.

In practice, the clutch is used to connect the flywheel to the crankshaft. Therefore , it acts as a separator between the engine and the wheels. In this way the engine can be left on and turned even when the car is stationary and the wheels are not running, the so-called "neutral".

The most recognizable part, the disc, is covered on both sides by a friction material.

When we press the clutch pedal we lift the pressure plate which no longer presses the clutch and releases the engine from the wheels.

By separating the two discs at the same time, we obtain a smooth and "jerk-free" gear change.

What is meant by a slipper clutch?

If you try to accelerate and you notice that the revs rise but the speed increases with a certain delay, as if something is not transmitting the power from the engine to the wheels.

This is exactly the feeling that is identified with a slipping clutch.

In the most extreme cases where the clutch is completely gone, the car can have a very noticeable lag or loss of power. No matter how hard you press the accelerator, the engine revs go up by the thousands, almost into the red zone, without the car going any faster.


The solution to a slipping clutch is just to replace it.

Why does the clutch slip?

Clutch operation depends on the coefficient of friction between the engine flywheel and the clutch disc. This friction force can sometimes be greatly reduced due to various factors (which we will discuss later in this article).

When the frictional force decreases and the contact surfaces of the clutch disc and flywheel no longer interact as they should and the engine torque is not transmitted effectively to the wheels. This results in the infamous problem commonly known as "clutch slippage".

As a result, we have the feeling that in order to reach a certain speed the machine has to reach a much higher speed than normal.

What are the causes of a slipping clutch?

The causes of a slipping clutch can be different. The most common ones are:

Slipping clutch on an uphill slope

On an uphill gradient all the components of the car are under great stress, the clutch makes no difference.


As a result, clutch wear may not be evident while driving in town, but it can show up during a steep uphill climb.

If the clutch slips up several times, the best advice is to consider whether it's time to change it. Unfortunately there is no standard clutch life, it depends a lot on the driving style and the type of road the car is used to driving on.

If the clutch slips under acceleration, it has almost certainly reached the end of its service life.

Dirt on the clutch disc should be ruled out as it will have cleaned itself after miles of driving.

If we combine the slipping clutch on acceleration with a delay in sending power from the engine to the wheels and the unpleasant smell of burnt clutch we have to change the clutch as soon as possible.

Cold slipping clutch can in many cases be due to the presence of moisture, condensation or anything else between the disc and the flywheel of the engine.

If it happens rarely and only occurs when cold, there is nothing to fear.

If the clutch slips when cold and also in other situations, then it may be time to change it.

If the clutch gets hot, i.e. with the engine running and after several minutes of driving, the problem may result in incorrect heat dissipation.

In practice, the heat generated by the friction between the clutch, flywheel and engine disc is not dissipated correctly and this leads to malfunctions resulting in "slipping".


This is avery common problem and therefore, if detected, we recommend that you visit a mechanic as soon as possible.

Slipping clutch at the start

If your car's clutch slips on start-up or when moving at low revs, the problem is probably related to the pressure plate and springs.

If they are damaged they don't exert enough pressure on the clutch plate which, with the engine moving from stop to go, creates slippage.

Needless to say, if the problem occurs often, you will need to see a mechanic as soon as possible.

The clutch tears and pops out

If the clutch tears and pops, it means that the clutch has most likely been damaged and doesn't engage with the flywheel or engine crankshaft as it should.

How do you fix a slipping clutch?

As soon as you notice that your car's clutch is slipping, you need to go to a mechanic to have the clutch replaced.

Our advice is to always replace the clutch as a kit and avoid replacing just one or two worn or damaged components. This is because it takes a lot of man hours to disassemble the clutch. The mechanic's man hours are, in fact, the main cost item of the clutch replacement procedure. Choosing to replace only a few components could allow a small saving today at the expense of a much higher cost tomorrow.

Sooner or later you will have to replace all the other components and this will again involve the cost of man-hours to disassemble all the parts and get to the clutch.

Scratches in the bodywork? That's how we get rid of them!

Brake light on: what to do and what are the causes?

Defective car thermostat: how much does it cost to replace?

add a comment of Sliding clamp? Here are the causes and what to do.