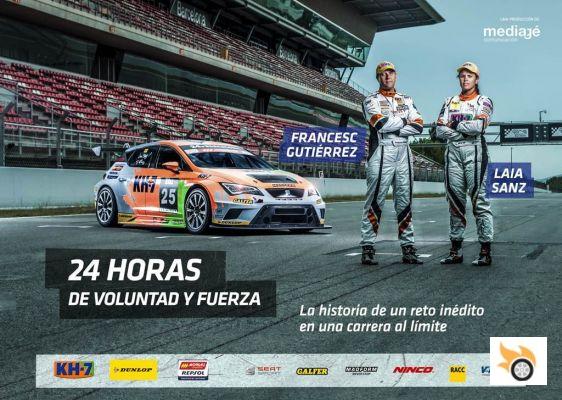 Last year, the driver, coach and organizer from Girona - the only one who has competed in all the editions (16) of the Montmeló endurance race - and the multiple trial and enduro champion - ninth overall in the last edition of the Dakar - launched the #Reto24Horas, consisting of competing in the race with just the two of them at the controls of a Seat León Cup Racer, as opposed to the usual teams of four or even five drivers.

They managed to finish, first in their category and in a magnificent twelfth position overall, among the 50 teams classified out of 65 that started the race, which is a very good result. The experience has been captured in a documentary entitled "24 hours of will and strength", which will soon be released on television.

It is a 40-minute documentary, directed by Xavier Sanjuán, in the style of the celebrated "One team. One target" and "24 Hours. So close", produced by Steroscreen about the vicissitudes of the official BMW team in the 24 Hours of the Nürburgring. Here you have the trailer, which already gives a glimpse of the "complicity" and "brutal chemistry" that, according to Sanjuán, the two main protagonists exude and which is evident throughout the film.

But this year, as we said, Laia and Francesc want more. They will repeat in the 24 Hours of Barcelona, but with more ambitious goals. "Last year it was a curious and nice challenge; now it's crazy", they say.

Now, Laia Sanz and Francesc Gutiérrez aspire to win not only in their category (the A3T) but also among all the front-wheel drive vehicles. And, at the same time, to get into the top 10. "And if we do the rain dance we can even give some surprises", says Francesc.


His weapon will be again the Seat León Cup Racer, an evolution of the 2014 model and in the "Long Race" version, developed by Seat Sport for this kind of races. It has a 100 litre fuel tank, fatter brakes (like those of the TCR Series car) and a racing gearbox that weighs 40 kg less. In addition, Laia and Francesc's Leon will be fitted with ABS, which will help them a lot in case the heavens open up.

At the time of writing this, Seat Sport is already 109 León Cup Racer manufactured, and the unit that Sanz and Gutiérrez will drive is the only one that we could consider 100% official -all the other Cup Racer are bought by customers-, given by the racing department of the brand from Martorell for the #Reto24Horas. As last year, Monlau Competición -which competes with this car in the Seat León Eurocup- will be in charge of the technical and logistical side of the team.


While the longest day arrives, the documentary "24 hours of will and strength" is a good reminder of the spirit of sacrifice and the eagerness to overcome that is required to face such a challenge between only two drivers.