Cost to Change Timing Belt (and When to Do It) 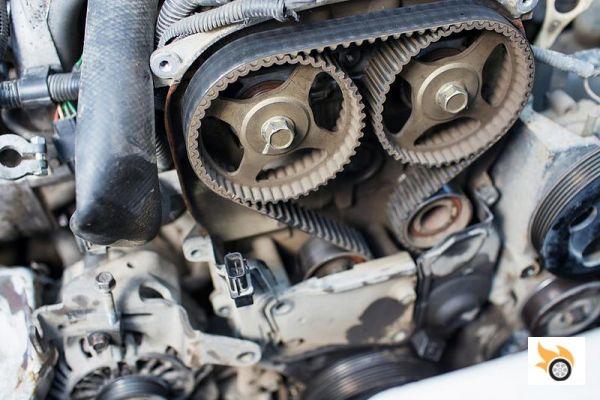 What does the timing belt do and what is it for?

The timing belt is one of the most important parts of any engine. It is used to synchronize the crankshaft with the cam shaft. Simply put, the timing belt allows the different parts of the engine to work in sync, opening and closing at the right time. This tuning allows the engine to release, "under control", the energy of fuel combustion and transmit it to the wheels.

The timing belt is made of a plastic/rubber material that makes it flexible and allows it to withstand the continuous stresses and strains resulting from the movement of the gears. Operating in close proximity to the engine, the belt undergoes large temperature changes. The tension, stress and high temperatures eventually "dry out" the plastic material of which the belt is composed and cause tearing or damage.

When the wear is excessive, the belt cannot be repaired but the timing belt must be replaced. In this way a new belt is installed which allows perfect engine timing and avoids damage to valves and pistons.

How often do you change the timing belt?

In the instruction manual of each car it is clearly indicated the exact life of the timing belt expressed in years or kilometers. This is because the belts produced today do not give any indication or symptom that they are damaged or torn. In the past, "noisy belts" were also sold that made a distinct noise when they began to wear too much, warning the driver that they needed to be replaced.

In principle, however, the timing belt should be replaced:

What happens with a broken timing belt?

As already mentioned, the belt plays the crucial role of synchronizing the internal parts of the engine. As soon as the timing belt breaks or is damaged, the synchronization fails and the internal components of the engine can no longer function properly and collide with each other. Tearing of the belt almost always results in serious damage to the engine, which will cost several thousand euros to repair. This damage includes piston and valve breakage, crankshaft and/or camshaft breakage and water pump failure.

The serious damage to the machine caused by a broken (or even simply damaged) timing belt should be enough to induce even the most stubborn to meet exact timing belt replacement deadlines.

It is useful to know what the symptoms of a broken timing belt are. This way, if one of these symptoms appears, we will know how to react promptly, avoiding worsening the situation or creating problems for the internal parts of the engine. The best prevention for a broken timing belt is always to replace the timing belt within the prescribed time limits.

How much does it cost to replace the timing belt?

Normally the cost of timing belt replacement is around 400 and 600 euros for a mid-range machine, between spare parts and labour. On some luxury car models the cost of replacing the timing belt can be up to 1000 euros.


The bigger the car, the more difficult it can be physically to get to the timing belt and replace it, which increases the cost of the intervention due to the many more man hours required to perform the timing belt replacement. But if you thought it was here, you're wrong.

The cost of changing the timing belt can ironically be more expensive for a small car than for a very large car. While it's true that larger cars tend to cost more to change the timing belt, there are exceptions to the rule. Some large cars, which are usually American-made, have very generous clearances that allow the mechanic to reach the timing belt with ease.

On the contrary, some European micro city cars have very narrow spaces that force the mechanic to remove many parts or even lift the engine just to reach the belt. Consequently, the price of changing the timing belt can increase to such an extent that, in the case of a particularly old car, it can exceed the price of the car itself.

If you are thinking of buying a second-hand car, always check the condition of the timing belt because the only one is just around the corner (or perhaps it would be better to say under the bonnet?).

How to save money on timing belt replacement?

Let's start by saying that our advice is to never neglect the timing belt of your car. Always respect the timing belt camhio time. You want because the parent companies describe cars as objects that do not need maintenance, a bit like smartphones, you want us to always be busy with the routine, change the timing belt according to the correct time is the best way to save on the maintenance of our car.

The price of the timing belt may seem high and insignificant to you. However, remember that breaking the belt or damaging it will result in more than 4 or 5 times the replacement cost. If you want to spend less, our best advice is to choose a good independent mechanic where you can save up to 20% compared to the cost of the parent company garages.

Finding a good independent mechanic may not be easy. Many people are afraid of ending up being cheated by thieves and crooks or getting a bad job that causes bigger problems instead of solving them. This is precisely why we have created Pistonudos, a unique service in Italy that allows you to find a good mechanic near you. Thanks to our network of independent workshops strictly selected by us, you can be sure that the job is well done. Moreover, as already mentioned, you save up to 20% on the cost of timing belt replacement.

How much does it cost to change the clutch of the car? ❯