Clogged EGR valve: Symptoms and what to do 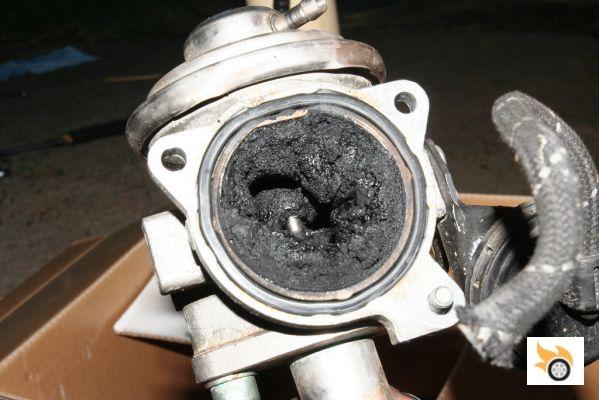 The EGR valve is a component that serves to reduce the emission level of modern vehicles. This valve recirculates part of the exhaust gases back into the engine (between 5% and 15%). This allows complete combustion of the fuel and a reduction of toxic substances, including nitrogen oxide.

Some vehicles have a mechanical EGR valve, actuated by the gas flow, while others have an electronic one. Generally, the electronic versions, like all other components, tend to give more problems in the long run.

The EGR valve is almost always fitted to almost all diesel engines and more and more recently also to petrol engines.

Car EGR valve indicator light: what is it?

The general engine fault warning light is the red one that represents an engine. If you are unable to recognise it, we recommend you take a look at our Guide to Car Indicators.

What are the benefits of a good EGR valve?

Symptoms of a broken or clogged EGR valve?

Like all car components, EGR valves are subject to wear and tear and can therefore break. Because they deal with exhaust gases, they can become clogged and clogged in the long run, becoming partially or completely non-functional. Let us now look at the possible causes of EGR valve failure:

What problems does a broken or clogged EGR valve cause?

If the EGR valve is broken or clogged, the following scenarios can occur:

How much does it cost to replace the EGR valve?

If an EGR valve is too clogged or damaged after years of wear and tear, replacement becomes the only possible option. Fortunately, this component is quite inexpensive, usually between 50 and 70 euros.


If we then rely on a specialist garage, the price of the EGR valve will be added to the cost of the garage's labour. Normally a good mechanic should not take more than two hours. Calculating an average labour cost of 40 euros per hour, the replacement of the EGR valve should cost us a total of about 150 euros.

What to do if the EGR valve is dirty?

It can often happen that the EGR valve is only very dirty and not necessarily damaged or broken.

In this case we can also avoid replacement and opt for the much cheaper cleaning procedure.

To clean the EGR valve you need to buy an EGR valve cleaner, making sure it is specific to your car. There are several versions in circulation, some suitable for diesel engines and others specifically for petrol engines.

You can buy the EGR valve cleaner from both physical stores and the various online accessory sites. The cost of the cleaner is usually around 15-20 euros.

The EGR valve cleaner acts on the dirt and revitalizes the valves by removing scale and exhaust residue. What's great is that you don't even need to remove a single screw, the cleaner acts as a closed loop cleaner and greatly reduces costs.

Another advantage of using the cleaner is that it restores normal exhaust gas flows, reducing fuel consumption and increasing the car's performance. In addition, the cleaner greatly reduces the residual smoke that we normally see coming out of the muffler.

How do I know if the EGR valve is bad?

What happens if the EGR valve is plugged?

This type of failure generates a significant loss of power in the engine, jerks or complexity of cold starts, in addition to increased smoke emissions.
If the EGR valve remains closed, it will not fulfill its function of reducing pollution.
20 jul two thousand twenty

What tests are done to detect possible EGR blockage?

The most obvious symptom would be a warning light on your vehicle's dashboard, a telltale that could be a generic "engine failure" or emission control system malfunction telltale.
However, this warning light may not come on in some cars, or it may come on intermittently.

What faults does the diesel engine develop when the EGR system malfunctions?

These can be reduced power, increased fuel consumption, a choking sensation in the engine, excessive smoke, jerking, inconsistent starting or even seizure of certain mechanical parts.
Whether the EGR valve remains persistently open or remains closed, it signals a problem.
9 sept two thousand and twenty

The EGR valve - what is it and how does it work? Simply explained! ❯

add a comment of Clogged EGR valve: Symptoms and what to do