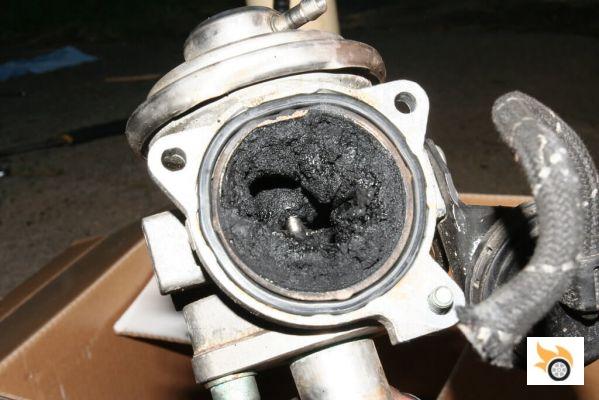 The EGR valve is designed to reduce the emission level of most modern vehicles. This valve reintroduces a part of the exhaust gases into the engine (between 5% and 15%). This mechanism allows complete combustion of the fuel and a reduction in pollutants, including nitrogen oxide.

Some cars have a mechanical EGR valve, actuated by the gas flow, while others have an electronic one. Electronic EGR valves tend to be more fragile and more susceptible to gas buildup.

However, to fully understand what an EGR valve is, it is necessary to explain what EGR stands for. It is an acronym for " Exhaust Gas Recirculation".

How does the EGR valve work?

You don't need a degree in mechanical engineering to understand how the EGR valve works. Its operation is in itself very simple. The EGR valve takes some of the exhaust gases, i.e. without oxygen, and reintroduces them into the engine's intake manifold.

In this way, the air that reaches the engine comes partly from the radiator and partly from the exhaust system. This process makes it possible to reduce the percentage of pollutants, which is an increasingly difficult parameter for car manufacturers to meet.

The EGR valve is always controlled by a specific section of the control unit. By means of a series of sensors located in the exhaust manifold, the control unit regulates the opening or closing of the valve, thus regulating the air flow to the engine.

Many motorists believe that the operation of the EGR valve reduces the performance of their car. This is an urban legend because the EGR valve in no way reduces the car's engine power. We have discussed what happens when the EGR valve is removed before and the consequences can be far from positive.

How does the single EGR valve work?

The valve opens and closes to adjust the amount of exhaust gas the engine needs to receive. The entire operation is managed by the control unit that monitors the quality of the gases through a series of digital sensors.

How does the dual EGR valve work?

Due to intensifying climate change, exhaust emission limits are becoming stricter every year. To keep up with these laws, automakers are striving to find simple, easy-to-implement solutions to make their fleets greener.

One such technique is the use of a dual EGR valve. But how does a dual EGR valve work? Basically, two different EGR valves are placed inside the exhaust circuit, which requires a double recirculation of air.

This mechanism creates problems related to exhaust gas pressure and for this reason it is necessary to introduce a throttle body that acts as a "plug" and increases the gas pressure. To understand how the dual EGR valve works all we need to do is to consider how the single EGR valve works.

What is the EGR valve for?

What problems can an EGR valve cause?

The most typical problem with an EGR valve is clogging. If you have read the previous paragraphs where we explained what the EGR valve is and what it is used for, you can imagine that exhaust gases are not the cleanest thing in the world. Every time the engine is running gases pass through the EGR valve.

Valve egr: what is it, what is it for and how does it work? ❯

add a comment of The EGR valve - what is it and how does it work? Simply explained!