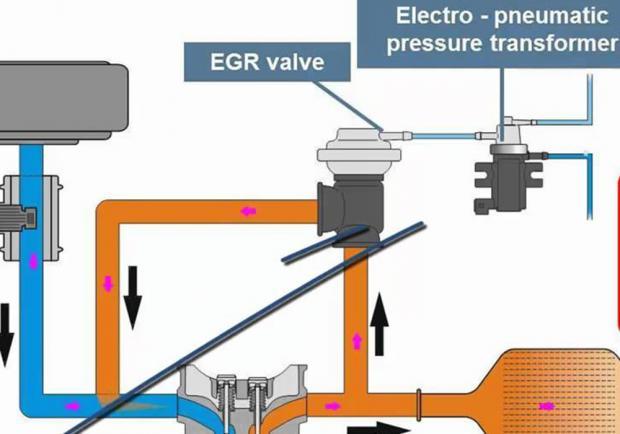 What is the egr valve?

The egr valve is a mechanical component that can be opened and closed allowing part of the exhaust gases from combustion to re-enter the engine itself.

What is the egr valve used for?

The opening and closing of the egr valve directs some of the engine's exhaust gases through a temperature exchanger which considerably reduces the temperature by cooling them. These gases, now free of oxygen, are returned to the engine. Through a chemical process called mild combustion, the use of inert gases considerably reduces the content of pollutants emitted by the car.

It should be noted that the egr valve recovers only a small percentage of the exhaust gases on average between 5% and 15%. This is because the engine still needs air containing oxygen to generate the combustion of the fuel responsible for the operation of the engine.

How does the egr valve work?

As it is constantly dealing with dirty exhaust gases and high temperatures, the egr valve can become clogged and blocked. In this case, if the symptoms of a dirty egr valve appear, it should be cleaned or replaced if it is too damaged.

Why is the egr valve blocked?

Now that we have figured out what the egr valve is for and discovered its function, many people wonder why the egr valve gets stuck and blocked. Well, the answer lies in the operation of the valve itself.

The combination of exhaust gases rich in combustion residue and high temperatures can create a paste that sticks to the walls of the egr valve. This paste can build up over time until it stops and clogs the valve.

The problem of a clogged egr valve especially affects diesel cars due to the higher residue content in the exhaust gas. If the car is used for short distances, the risk of clogging is even greater. At low speeds the egr valve does not clean itself and the likelihood of residue build-up is higher.


Cleaning of the egr valve can be done automatically during normal engine operation or, in extreme cases, manually. In the latter case the mechanic inserts chemical compounds that release the egr valve and remove the dirt that clogs it.

What are the symptoms of a clogged egr valve?

These symptoms include increased particulate matter in the exhaust gas, difficulty in starting the engine and engine knock. All of these symptoms basically indicate a problem in the engine's air supply.

When should the egr valve be replaced?

The replacement of the egr valve is not a planned intervention within the organized or ordinary maintenance of the car. Simply put, most cars will never have to replace their egr valve during their lifetime.

As explained before, using the car for short trips at low speed is the first cause of egr valve problems. This is because with short trips the engine never reaches optimum operating temperatures and produces waste-rich exhaust gases that build up over time.

During a long journey at high speed, the car's thermostat optimises the engine temperature and this produces clean exhaust gases that remove some of the residue from the egr valve.


It is therefore necessary to replace the egr valve when a drastic decrease in vehicle performance is observed, when the engine misfire light comes on or when one or more of the symptoms described above occur.

How much does the egr valve cost?

Replacing the egr valve is a relatively inexpensive operation. Obviously, the cost of the components and the man hours required depend on model to model.

In general, the cost, including the mechanic's working hours and spare parts, should be around 150 to 200 euros. Much of the cost depends on which garage you choose, authorised ones can cost up to three times as much as independent ones.

What is the egr valve light?

The egr valve does not have a specific indicator light of its own. Along with other engine components, the egr valve is included in the general engine fault warning light. This warning light is represented by a stylized engine that reminds most creative people of a helicopter or a submarine.

The illumination of this light can indicate serious problems with the car's engine, as well as an anomaly in the egr valve. For this reason, you should always be aware of what to do with an engine misfire light on.

Cutting cars under warranty and independent garages: can you? ❯

add a comment of Valve egr: what is it, what is it for and how does it work?