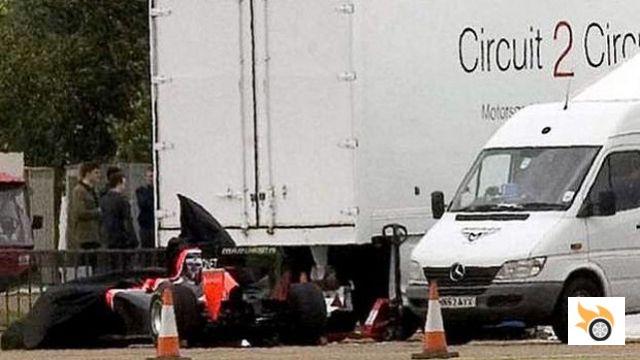 So much for the news.

It is not my purpose to assess whether or not there was negligence in the actions of any of the parties involved.

What I was clear from minute 1 -and I ratify myself now- is that María de Villota was a victim of the limitation of tests, on the one hand, and of the small teams' desire to collect money, on the other hand.

To put it bluntly: in my opinion, Marussia simply wanted to make money and therefore gave Maria what in basketball would be the garbage time. Instead of a Friday free session or a proper test day on a circuit with capital letters (forbidden fruit due to its scarcity), the team then still based in Banbury sent Maria to a cold English airfield to do the job.

These aerodynamic test days used to take place in an environment and conditions unworthy of the premier class. Marco Canseco analyses the facts in Marca today and explains that, according to the organisation mentioned at the beginning, "there was no need for a doctor or ambulance for this type of test".

Almost 30 years ago the death of Elio de Angelis in a test at Paul Ricard led to the obligation to have a helicopter and medical center operating whenever an F1 car went out to roll a circuit. Apparently, the thing was not about these aerodynamic tests, aka "the minutes of the garbage".

Someone at the FIA realized what was the real trigger for Maria's drama, and aerodynamic testing was quietly dropped from the 2014 F1 sporting regulations. I haven't heard anyone missing them.


Actually, no wonder, because when aerodynamic testing was in effect, teams could forgo each of the stipulated four days in exchange for... four hours of wind tunnel testing! Full scale, mind you.

Maria's dream was worth the same as 240 minutes of wind tunnel testing.

I repeat, they gave her "the garbage minutes".

Saving the distances -because the consequences are diametrically different-, it's the same contempt Williams showed to Susie Wolff when the Scottish driver did her first Friday practice session at Silverstone last year.


She barely did a lap before her mechanics gave up. The team later unashamedly acknowledged that Wolff was running an engine that was well past its life cycle.

F1 teams seem to be delighted with the media impact of having a female driver in the team, but when it comes down to it, they are the first to show rather little conviction about her abilities.

That is the underlying problem that drags down the very high price Maria paid for the garbage minutes.

Follow the 24 Hours of Le Mans live with us here ❯

add a comment of On María de Villota's accident