When do you need to change the clutch of your car? Find out when! 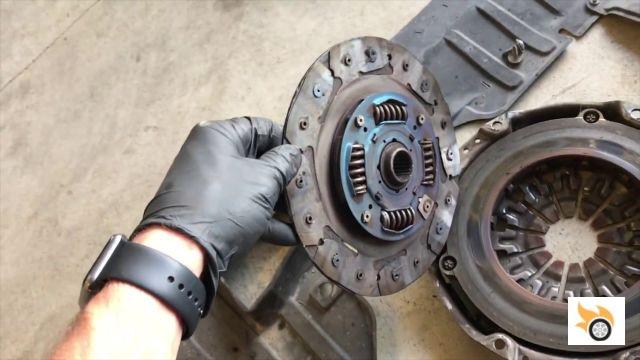 What is the clutch of the car?

The clutch is one of the crucial parts of our car. Its main task is to connect the flywheel to the crankshaft which rotates at different speeds, thus acting as a separator between the engine and the wheels.

In this way, the engine can remain running even when the car is stationary, the so-called "locos".

The disc is covered with a friction material. When you smell the odor of burnt plastic, it is precisely because of the layer of abrasive material that is too worn.

When we press the clutch pedal the pressure plate rises, no longer presses the clutch and therefore disconnects the engine from the wheels.

The separation of the two discs allows a smoother gear change without "scratching" or "pulling".

What does a burnt clutch mean?

A "burnt clutch" is when the abrasive material on the disc wears excessively, thus causing a burnt chemical smell.

This pungent and intense smell is usually only noticeable after shifting gears incorrectly.

If you notice it when the machine is switched off, it means that the clutch is completely worn out and therefore needs to be replaced.

How often do you change the clutch?

Unlike other car components, the life of the clutch is not predetermined by mileage. In fact, the variables that most determine clutch life are driving style and type of road.

For example, if you tend to drive by pulling in the clutch or shifting gears without the clutch being fully lifted, the wear will undoubtedly be greater. The same is true if we have the bad habit of leaving our left foot resting on the clutch pedal. By doing so, we lift the clutch a little and it rubs against the flywheel and the crankshaft, wearing much faster.


The road we drive on mainly affects the life of the clutch as well. The clutch of a car that is driven in the city, between stops, priorities and traffic lights will actually suffer more stress due to the higher number of gear changes. A car that is used only on the motorway, on the other hand, for the same number of kilometres, will have a less worn clutch.

So how often do you change the clutch?

Since there is no predetermined duration, we can only indicate generic intervals. The clutch in a modern car is designed to last as long as the car when used correctly.

Therefore, it should last approximately hundreds of thousands of miles. However, it is not uncommon to have to change it as early as 50,000 kilometres or even after a few thousand kilometres if you drive really badly.


In fact, the internet is full of memes and cartoons about the old man who, without using any gears other than first gear, consumes one clutch per year...

When should you change your car's clutch?

The car's clutch should be changed as soon as symptoms of a burnt or over-worn clutch appear. These symptoms include vibrations in the clutch pedal, difficulty engaging reverse gear and the smell of burning.

We recommend you take a look at our list of 7 symptoms of burnt friction. If you notice even one of these symptoms, it means it's time to change it.

As explained above, it's not easy to determine how long the clutch will last, it depends too much on the driving style and the route you use the car on.

Car seat cleaning: here's how it's done for leather and fabrics ❯

add a comment from When do you need to change the clutch of your car? Find out when!