Low car battery: here's what to do and how to get going again 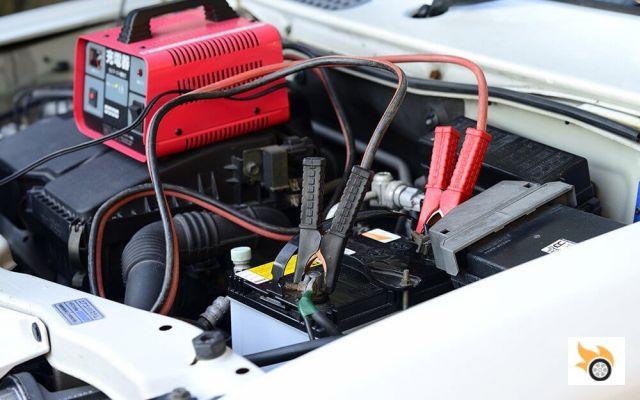 What is the car battery and what is it for?

The car battery is a device for storing electrical energy through a chemical reaction. The part visible from the outside is in fact a container filled with electrolytic liquid, usually sulphuric acid, in which two electrodes, one positive and one negative, are immersed.

The car battery then has the secondary function of assisting the alternator when the vehicle's power needs exceed those of the engine. Normally, when the engine is running, the vehicle's electrical functions are powered by the alternator and the battery is recharged. However, if many instruments are switched on while the car is stationary, for example, the air conditioning and stereo in summer, some of the electricity is supplied by the battery.

Therefore, without a good battery it will be impossible to start the car or use various electronic functions when the engine is switched off. In a modern car with a dead battery you will hardly get far.

What are the symptoms of a dead battery?


Self-discharged battery is such a common problem that there are many symptoms that indicate its presence. We have written an article on the 9 definitive symptoms of a low battery.

How to understand if it's time to change your car battery?

If we've had to recharge an empty car battery more than once and it keeps leaving us stranded, it may be time to change it.


Generally, a new car battery, used consistently and correctly, should not give problems before 4 or 5 years. If it gives problems from the first year, there may be a factory fault in the battery itself or in the alternator. It may be that you have obtained a faulty part from the factory and in this case it is covered by the manufacturer's 24 month warranty.

In general, to avoid being stranded, the lamp/alternator battery will light up to alert you to the problem and almost always to the presence of a self-discharged battery.

What to do if the car won't start because of a dead battery?

If the car won't start and we are afraid that the problem is the car's low battery, we have three (obvious) options:

How do you start the push car?

Here's how to start a push car with a low battery:

The car should start because we have replaced the starter motor with "human" push power.


Unless you've been having fun testing the push ignition, the first place you'll need to go is to the electrostatic to change the battery or charge it properly. In this context, thinking that the self-discharged battery can be recharged with a twist is just wrong.

How to jump start a car with cables?

Almost all cars come with a set of cables for emergency battery charging. They are usually placed near the spare wheel under the trunk.

The procedure is simple but must be done with extreme caution so as not to damage the batteries of both cars or hurt yourself, there is a risk of explosion if things are not done correctly. Let's see how.

Once you have done this, we strongly recommend that you go and buy a new battery or take your car to an electrician to check the condition of the battery. It may need to be replaced if it is too worn. Our advice is to always replace your car battery if you have had to jump start your car.

Why won't the car battery charge?

A car breakdown, a change or recharge of a flat car battery and the problem occurs again after a few days? The problem is that the alternator is not charging the battery correctly.

If the alternator is damaged, the electric current may be transmitted at a voltage lower or higher than required by the battery, undercharging it or damaging it permanently.

In this case there will be no choice but to take the car to the garage to have the alternator replaced. Since it is not subject to a lot of wear and tear, you can usually choose to have a regenerated one fitted and save on labour, as well as making a nice gesture to the environment.

How much does it cost to replace a car battery?

The price of a car battery depends not only on the brand, but also on its starting point and its capacity (measured in Ah Amps). Typically prices range between 45 and 160 euros.

Another factor to consider when judging the price of a battery is the size of the car it will be fitted to. Obviously, a two-tonne SUV will need a larger, and therefore more expensive, battery to start its engine than a small city car, which will need a slightly larger battery than a scooter. Size counts in this context, but to its disadvantage.

With a flat car battery there is little to do and if you can't recharge it due to overly worn conditions, then you need to buy a new one.

Car Km 0: What are they? What advantages do they have? Guarantee? ❯

add a comment of Low car battery: here's what to do and how to get going again