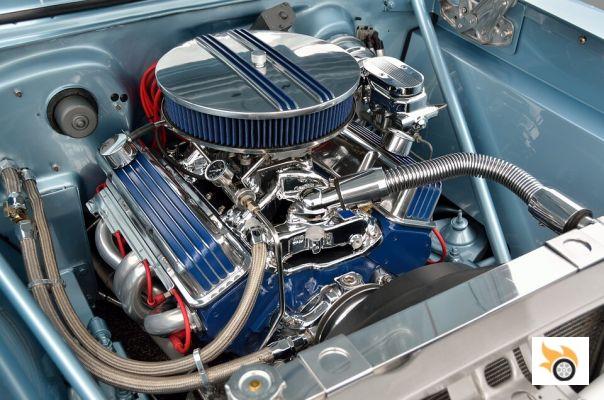 What are engine mounts?

Typically, each engine is supported by at least 3 engine mounts rising to 4 on cars with larger engines.

Why does the engine mount break?

The strong vibrations to which they are constantly subjected and the exposureto atmosphericagents are one of the main causes of wear and tear of the engine mounts.

Very often the rubber that dampens vibrations dries out and cracks, creating an uneven surface on which the engine mount rests. Metal mounts can also wear out or break completely. In both cases, the engine is no longer supported properly and this causes the symptoms of a broken engine mount to appear.

What are the symptoms of a broken engine mount?

The car's engine is designed to work efficiently when it is positioned efficiently. If the engine tilts to one side, the components inside it will no longer work properly and this can cause long-term damage.


One of the main symptoms of engine mount breakage is abnormalengine misalignment. As an experienced eye, this alignment can be seen by simply lifting the hood. For the less experienced, it may be necessary to use a blacksmith's bubble or a mechanic's opinion.

One of the clearest symptoms of a broken engine mount is an excessive and abnormal amount of engine vibration. As long as only one of the engine mounts is worn, it is impossible to stabilize and align the engine correctly.

An engine that is not properly secured will tend to shake more than it should and create vibrations that can be felt from inside the passenger compartment. The best way to check for these vibrations is to focus on a fixed point in the car and see if anything is out of the ordinary.

If the vibrations are really too much, then you should check the integrity of the engine mounts.

One of the worst symptoms that can occur is engine damage. This symptom is very general and could also arise due to other problems. If an engine mount breaks completely, the engine will no longer be securely attached to the chassis.

Thus, with every jerk , tw ist or speed change the engine will move and crash in the engine compartment. Parts inside the engine could be damaged if not completely separated.

Obviously, other components inside the engine compartment will also be damaged by the uncontrolled bouncing of the steel mass.

One of the clearest symptoms of engine mount failure or any car problem in general isexcessive engine compartment noise. Whether it's worn out or completely broken, a malfunctioning engine mount creates loud vibrations and noise that even the least experienced driver would recognize.

Excessive noise can be due to the engine hitting other components, engine internals not working properly, or many other reasons. Therefore, the important thing is to recognize when there are abnormal sounds that do not bode well, stop the car and seek help from a specialist.

If the engine is not supported by the engine mounts in an aligned and precise manner all of its components will malfunction. Some of the components mounted abroad, such as service belts or timing belts, may be so damaged that they must be replaced immediately.

When these components break, we will have to add to the cost of repairing the engine mounts all the costs of the damage caused by the broken belts. The bill could get soaked up very quickly and therefore we recommend not to underestimate these simple and crucial components.

How much does it cost to replace a broken engine mount?

Replacing engine mounts is an intervention that requires lifting the entire engine unit. This is an operation that should be left to professional mechanics with the right equipment, so let's avoid the neighbor who offers to lend a hand.

These costs can vary greatly depending on where you choose to take your car and the type of engine mount you need.

What happens if my motor mount breaks?

If the motor mount is damaged, the rubbers become porous or even crack.
To avoid damage to the engine area (and which can be considerably more expensive to fix), you will need to remove a broken engine mount as soon as possible.
16 sept two thousand and twenty-one

What happens if the transmission mount breaks?

What happens when the cylinder head gasket burns out?

Due to excessive heat, the pipe cover gasket would be burned, causing it to generate a leak that can destroy the entire engine.
Color and fragrance of the smoke: due to overheating, the tone of the engine smoke changes and becomes gray or white, in addition to this it has a different fragrance than usual.
19 feb two thousand twenty

Why does the head gasket burn out?

Why does the head gasket break? This part is not prone to break down by itself, but rather it is due to deterioration.
It is usually caused by excessively high temperatures or water leakage, causing the gasket to burn, become irregular and, since it does not perform its sealing function, it ends up damaging the entire engine.
22 may two thousand and nineteen

Broken timing belt: symptoms, noises and what to do ❯

add a comment of Broken engine mount: here are the 5 definitive symptoms