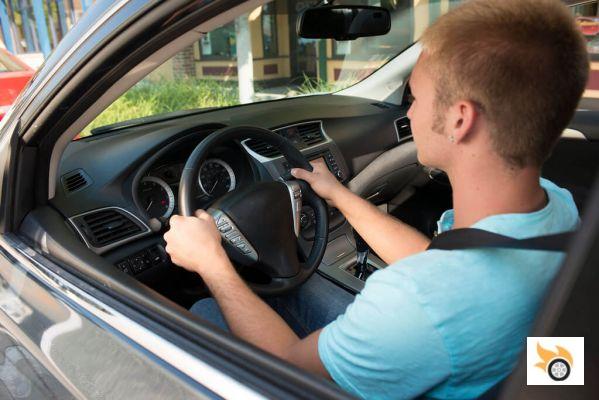 Who are the newbies?

Before getting into the dense web of new licence limits, it is useful to define who the new licensees really are. According to Italian law, the term "neopatentado" refers to those who have held an A, A2, B or B1 driving licence for less than three years.

At the end of the 3 years the newly licensed driver becomes an ordinary driver and therefore all the limits of the new license to which he/she was subject expire. This does not mean that it is possible to commit more offences, but simply that you are out of the "zero tolerance" zone.

The vast majority of newly licensed drivers are young Italians with their first licence. Despite this, among newly licensed drivers we can also include people who are not very young or have problems with the first issue of a driving licence. Regardless of the driver's age or driving experience, if he/she is considered a new driver, he/she will have to respect the limits of the new license.

According to the Highway Code, the driver has a new license if:

What are the main limits of the new licenses?

The limits of the new license accompany the new driver not only when driving, but even before getting behind the wheel. In fact, the limits influence the choice of car, which, as we will see, must respect very strict power limits. The government's logic, criticized by many experts, is that a less powerful car is more difficult to cause accidents or problems.


The main newly licensed limits can be divided in this way:

Some of the new license limits described above apply to the 36 months in which the new license was obtained. Other limitations, such as vehicle horsepower, only remain in effect for 12 months.

One of the most annoying limits on new licences is the maximum speed limit. Newly licensed drivers cannot exceed 100 km/h on motorways and 90 km/h on provincial roads. We remind you that in addition to these limits, the 50 km/h speed limit on urban roads remains unchanged.

New licence limits: the power of the car

Another of the most painful limits of the newly licensed is the one that limits the choice of the first hot rod to a few cars. In fact, many families prefer to wait until their son/daughter has had a year's experience and is allowed to use one of their cars rather than having to buy a new low performance car.

For the purposes of the new authorised limits, car power is defined by two parameters: weight and kw. Weight is obviously intended for tare weight. A car to be driven by a novice driver must comply with the following indications:


These two limitations restrict the choice of a first car for novices to a few, very small, basic models. Due to these limitations, which only exist in Italy, not all manufacturers have a vehicle suitable for new licensees in their range. A smaller product offering translates into a higher price for the driver.

Limitations for new licensees: the displacement of the car

As we have seen, the main limits on the power of newly licensed vehicles are expressed in kw and weight. However, there is another limit which is expressed in engine power, stated as hp.

The new authorised displacement limit is 75 hp. Any car above this power cannot be driven during the first year of driving. The only exception to this rule is if the vehicle is used to transport disabled people. In this case, it is compulsory to always display the handicap sticker.

Limits of the new licence: the licence points

Another limitation for novice drivers is the double deduction of points from the driving licence in case of traffic offences. When we say offences, we mean literally all possible offences.

Of all the newly licensed limits, this is the one that must always be taken into account to avoid a serious loss of points.

Another limiting aspect of driving licence points is the increase in points for each year in which no offence has been committed. While every driver gets 2 extra points each year without serious offences, the new licensee only gets one. As a result, after the 3 years of the new license, you will only get 3 extra points instead of 6.


We remind you that there are different ways to check the balance of your license points and make sure you are not close to exhaustion.

Driving under the influence of alcohol is a serious crime that endangers not only the driver's life, but also the lives of passers-by or other unsuspecting drivers. For this reason, the legislator wanted to set a clear example by creating new, strict limits for the driving licence in terms of blood alcohol levels. The details of the offence and the corresponding penalties are clearly listed in Article 186 of the CSDC.

In simple terms, it takes a zero tolerance approach to drinking and driving by novice drivers. So let's look in detail at what the new permitted alcohol limits are:

As obvious as it may seem, we at Pistonudos would like to remind all our customers and blog visitors of the importance of not driving after consuming alcohol.

The limits for newly licensed drivers apply to any foreigner resident in Italy with an Italian or foreign driver's license.

Any foreigner from outside the EU visiting Italy for a period of less than 12 consecutive months is not required to convert their licence and is therefore not subject to the new Italian licence limits.

It is different if the foreigner in question stays in Italy for more than one year, for which he has to convert his license and incur the new license limits described above.

What to do in the case of an Italian rookie driving abroad? In this case the answer is"When in Rome, read what you find".

The situation for the newly graduated driver is in fact much more promising abroad than in Italy. This is because many of the new limits authorised in Italy are not present abroad. The most striking example is the limitation of car power. A novice driver who has had his license for two weeks can easily drive a supercar in Germany or France.