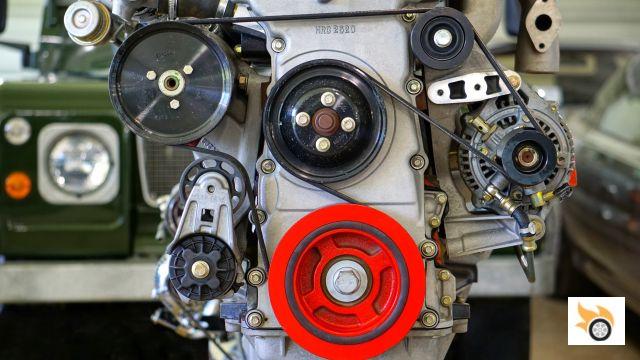 What is the timing belt and what is it for?

The timing belt is one of the most important components of the engine of cars, motorcycles and scooters. The belt, as its name suggests, is a toothed belt of elastic or rubberized material, reinforced by metal parts, which forces all the gears to which it is connected to move simultaneously in a synchronized manner.

When do we change the timing belt?

If damaged, the timing belt must be replaced immediately, as will be explained in more detail below. Under normal conditions, the timing belt should be changed every 100-180,000 kilometres or every 5-6 years. It is clear to everyone that the more kilometers you drive, the more wear and tear there is on all components, including the timing belt, but what should you do if you use the car very little and still it is advisable to change the timing belt after 5 years?

Well, due to normal environmental conditions, the rubbery material of the belt will dry out , become thinner or lose the necessary elasticity, becoming more brittle and therefore should be changed.

In any case, to find out after how many kilometers the timing belt of your car needs to be changed, consult the owner's manual and find the interval in years or kilometers recommended by the manufacturer.

How much does it cost to change the timing belt?

The cost of changing the timing belt depends a lot on the size and make of the car. The replacement belt usually costs between 40 and 150 euros, but a large part of the cost lies in the mechanic's work, which can range from 500 to 1,000 euros.

The bigger the car, the more difficult it is physically to reach the belt, which is often located in inaccessible parts of the engine. In addition, if the belt is damaged, other components such as bearings , belt tensioners or the water pump will probably also be damaged; if they have to be replaced, the price unfortunately increases.

For luxury cars a timing belt replacement can easily cost more than 1000 euros due to the high cost of the original parts. One thing is certain, the damage caused to the car by a broken or too worn belt is on average 4 or 5 times the cost of replacement; the typical example of how good car maintenance is an investment, and not an expense, for our pockets.

What are the symptoms of a broken timing belt?

Since you should never resort to self-diagnosis to assess the condition of your car's belt, but should always rely on specialists, there are some warning signs:

If you notice even one of these symptoms, immediately check the belt replacement intervals in the owner's manual and contact a mechanic. If left out, a broken or worn belt is sure to cause very serious damage; unfortunately this is a guarantee!

What to do if the timing belt breaks?

If you think the belt on your car or scooter is broken, the advice is not to turn it on or move it at all, not even a few feet! It only takes a few revolutions of the engine with the broken belt to cause the valves to collide with the pistons, ruin the cylinders and damage the engine head, causing major damage and making the car unusable.

Call a good mechanic immediately and, if necessary, have the car towed to the shop; you can be sure that the cost of the tow is really nothing compared to having to redo the engine because of the damage caused by the broken belt.

Can I drive with a broken timing belt?

Absolutely NOT! The engine components, running at very high speeds, must be perfectly coordinated and, without the "control" of the belt, within seconds they crash into each other causing irreparable damage.

Unfortunately if the belt breaks while driving there is little to do, the important thing is to stop safely, turn off the engine and hope that the damage is limited.

Why does the timing belt break?

The timing belt needs to be elastic and flexible to be able to do its job, so it is mainly made of rubber with metal reinforcements at key points such as the teeth. Do you know what happens to phone cases after years of use, perhaps if they are left in the sun while playing sport or at the beach? They dry out and harden!


The same applies to the belt, which also operates at very high speeds and temperatures. To overcome this problem, high-end cars often replace the belt with a stronger metal timing chain. Another cause of belt breakage is due to wear of the steel tracks, the bearings or the belt tensioner on which the belt runs.

What is different between the timing belt and the service belt?

There is often confusion between the timing belt, which as mentioned above coordinates the camshaft with the crankshaft, and the service belt, which takes care of all the auxiliary systems and accessories of the car. It's basically the car's dynamo, meaning it transfers some of the engine's power to the alternator, which in turn recharges the battery that runs pretty much everything you control in the cabin (air conditioning, infotainment, windows, etc.).

That's why the service belt is often referred to as the "alternator belt". The service belt also powers the power steering pump, which allows us to turn the steering wheel effortlessly, the air conditioning compressor, which cools us with the air conditioning, and finally the coolant pump, which circulates the coolant in its circuit. Unlike the timing belt, the service belt, having to move less mass, is almost always free of "teeth" and looks more like a rubber belt.

add a comment of Distribution Belt: Here is the final guide (2020)