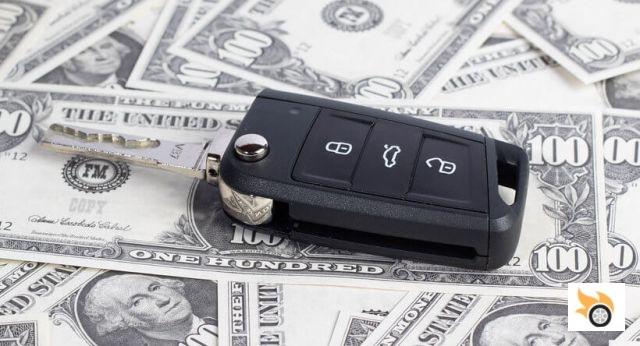 What if I lose my car keys?

If you have lost your car key, the best thing to do is to find the original duplicate and make another copy immediately. Before asking "how much does it cost to re-key the car," it is correct to ask "where did I put the second car key?

When you buy a new car from your dealer, they always give you two keys and it's good practice to keep the one you don't use (preferably not in the car) in a safe place. If you have bought a used car and the owner has given you only one key, it is advisable to make a second copy immediately. If the owner has not provided you with one, it may be useful to call him and see if he found it at home.

Assuming you have a spare key (if not, read what to do below) it is best to go and ask for a duplicate. Requesting a duplicate while you have a key is actually much easier, faster and cheaper than requesting one without one.

As much as you may not have to report the loss of your keys, it could come in handy in the future. This is because even years after the keys are lost, the insurance company will require that you get both of the original keys back. There may be problems getting the right compensation unless you have a report proving the actual loss of the keys long before the theft.

You may also get lucky and find that a passerby found them on the ground and turned them in to the police or the nearby carabinieri station.


Another advantage of reporting your lost car keys is the possible reimbursement of the cost of duplication by the insurance company. Once you find out how much it costs to rekey your car keys, it won't cost you anything to call your insurer and find out if replacement is included in your insurance plan.

How do I get my car keys duplicated?

Unless you drive a classic car whose keys are as simple as mailbox keys, you'll need to contact a specialist or the parent company. Many people think that to find out how much it costs to rekey your car keys, just go to a regular hardware store. Unfortunately for us many of them do not have the equipment to duplicate modern car keys and for this reason the price estimate would be unreliable.

First of all, you need to have with you the original duplicate key and, for more modern cars, the CODE. This CODE is an alphanumeric code that is usually written on a plastic plate attached to the keys supplied by the dealer. It will be useful to shorten the time of the procedure and to obtain the exact coding of our keys.

Who do you turn to in order to duplicate your car keys?

The best option is always to go to the dealer who sold you the car or to the parent company of your car. The important thing is to have the duplicate with you so that they can create a copy more quickly. Each dealership is also used to receiving a lot of requests for duplicate keys, so they will be able to tell you clearly how much it costs to have the car keys rekeyed.


Alternatively, if you want to spend less or need them immediately, you can rely on a private key duplication center. They can be useful if you lose your keys while on holiday abroad or in a place far from home.

If you really need it urgently, you can order an "over-the-counter duplicate" or a purely mechanical key with which you can access the car through the lock but not with the button.

How do you make a duplicate of a coded car key?

A certified or coded key is a key that, as an additional security measure, has a unique code that prevents the use of other keys in its place. Making duplicates of lost coded car keys is usually more expensive and complex than rekeying normal mechanical keys. To do this, you should contact your official dealer or a centre specialised in duplicating an encrypted key.

To request a duplicate of an encrypted key, you will need to have the CODE with you. The CODE is the code we find written on the sticker attached to the keys just taken by the dealer. With the CODE the manufacturer is able to take one of the "empty" keys already in stock and code it to work on your car.

By having the code with you it will be much easier to determine how much it costs to redo the coded car keys.

What to do if you have lost the CODE of your car keys?

If in addition to the car keys you have lost the CODE, don't panic. Duplicating a car key without a code can be complex, so it is better to recover the code. There are several ways to request both the new code for the keys and the keys themselves. Here's how:

Is it possible to duplicate car keys without the code?

As soon as you realize that you have lost not only the keys, but also the CODE, you ask yourself "is it possible to duplicate the car keys without the code"? Unfortunately, the answer is NO. As we have seen before, you will first have to request the car key code again and then proceed with the duplication.

Duplicating car keys without a code is impossible because a coded lock will only work with the corresponding coded key (or a duplicate that is still coded). Never trust anyone who tells you they can duplicate your car keys without the original code. All you will get is two new, expensive key fobs.

How much does it cost to rekey my car keys?

The question "Where did I leave my car keys?" is almost always followed by "How much does it cost to rekey my car keys?".

However, duplicate keys for some high-end brands can cost more than 200 euros. In this case, if your car is a few years old and you don't intend to keep it for a long time, it would be better to duplicate it at a generic centre and save money.

How much does it cost to duplicate an encrypted car key?

Duplicating an encrypted key always costs more than duplicating a similar unencrypted key. This is due to the more complex and expensive machinery required to perform the encryption task.

We generally recommend that you go to the dealer you bought the car from, as they will return some "official" keys to you. Alternatively you can go to the many dealers who offer the duplication and encryption service.

How much does it cost to duplicate car keys online?

When you Google how much it costs to redo car keys, you often find very cheap offers, some for less than 70 euros. Personally, we don't recommend trusting the first online seller who suddenly duplicates your keys for two reasons:

How can you save money on rebuilding your car keys?

Have you asked how much it costs to rekey your car keys and been surprised by the prices? Don't panic, let's see what you can do to save on duplicate car keys.

If you are not interested in having your car keys remade by the parent company or dealership, you can turn to other specialists and spend less.

Several key duplication centers have been in operation for years, sometimes even some well-stocked hardware stores, that allow you to have your keys remade at a fraction of the cost of the original keys.

Of course, if you want to sell your car, the new buyer may show up with "generic" keys. At the end of the day it is a part of the car that we carry constantly and some people like to have the original key.

The important thing is to make sure that the keys are correctly coded and in good working order. Therefore, our advice is to test them as soon as you receive them and avoid disreputable online suppliers. It is better to rely on a physical store where, for any problems, it will be easier to get answers.

Is it better to have the hardware store duplicate car keys?

The answer is "it depends". It depends on the type of car in question and the type of hardware store we're talking about. Newer model cars have coded, multi-functional keys that are difficult to duplicate by those who don't know how to or don't have the proper equipment. However, some hardware stores are very well stocked and equipped with the equipment to duplicate modern car keys.

Having the hardware store duplicate car keys is never the most suitable option, with rare exceptions, and a car key specialist should be preferred. However, this will change if the hardware store in question is equipped with the machinery and software for modern car key duplication and encryption. Just a word of advice, if you rely on a hardware store to duplicate your car keys, you should make sure that the keys work perfectly and that all the buttons perform their function (door unlocking, anti-theft, trunk opening, etc.).

What to do if the car key doesn't work?

If your car key is giving you problems, it is probably because it has run out of batteries. If you've been using the same pair of keys for years, it's time to open it, taking care not to damage the small pieces of plastic, and change the battery.

If the battery dies while you're out, remember that even modern cars have a mechanical emergency lock. You'll usually find it hidden under the driver's door handle. If not, you'll find it covered by the handle itself, just lift it up as if you were unlocking it and it should be there.

Before you wonder how much it costs to redo your car keys thinking they're broken, it helps to change the batteries. It seems trivial, but many people throw away keys that work perfectly, but with dead batteries, thinking they are broken.

What to do if I lose both car keys?

"I lost both car keys" is a phrase that every locksmith is likely to hear often. If you have lost your car key and can't find the duplicate, you can order a new copy of the keys.

In case you have lost both car keys to request a duplicate, you need the CODE and the vehicle registration to determine the characteristics of the vehicle. Without these data no operator will be able to recode the new keys of your car.

The cost of duplicate car keys may increase if you have lost both car keys and the code itself. In this case the most common option is to have the lock picked by a professional, take the car to the nearest garage and replace the cylinder with a new one.

Duplicate coded car keys: how and how much does it cost? ❯

add a comment of Car key duplication: How to redo it and how much does it cost?