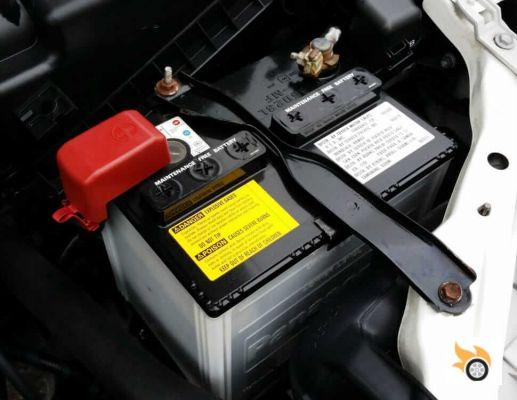 What is the car battery for?

The car battery is the device responsible for storing electricity over time in the car. Many people think that the battery is only used to start the engine, but it is also essential when the car is running.

The main purpose of the car battery is to power the starter motor, which in turn is responsible for starting the main internal combustion engine of the car. As soon as the main engine is running, the car's alternator comes into play which, in addition to recharging the battery, powers all of the car's electrical devices, such as the headlights, radio and air conditioning.

In some conditions thecar' s alternatordoes not produce enough electricity, which is then supplied by the car's battery. The typical case is when you are stuck in the summer queue with the air conditioning on. The power consumption is high and the alternator does not produce enough electricity as the engine runs at low revs, which makes it necessary to run the car battery.

Given the importance of the battery, it is useful to consider the life of the car battery which, unfortunately, is not infinite. If any of the symptoms of a low car battery appear, it is advisable to request a battery check immediately and consider replacing or recharging the battery.

How long does a car battery last?

Car battery life varies from model to model and depends a lot on how the battery is used. It is impossible to say how long a car battery will last without knowing the conditions in which it will be used. Factors such as humidity, atmospheric temperature, type of driving and other environmental factors have a great influence on car battery life.


Under ideal conditions, the average life of a car battery is 6 years. These conditions are cold weather, low humidity and frequent highway driving.

Humidity and heat are detrimental to the life of the car battery, as they affect its ability to store electricity over time. In addition, use on short city journeys affects the battery which has to supply power immediately without being fully recharged.

If you use the car mainly for short trips in a hot and humid climate, as can happen in the cities of southern Italy, then you should expect a shorter car battery life than normal, sometimes only 2-3 years.

How to prolong the life of your car battery?

There are some simple tricks that help prolong the life of your car battery. By adopting these tips we can be sure to greatly increase the life of the car battery and even double its life.

Let's see what are the tips to increase the average life of your car battery:

If we have trouble starting the car, it could also be the fault of a faulty starter motor or a defective alternator. Car battery life is certainly important, but it is not always responsible for car starting problems.

What is the hybrid car battery life?

The battery life of a hybrid car depends entirely on the type of model and the manufacturer of the battery. However, today, the hybrid car battery lasts at least 8 years.

The battery life of a hybrid car should always be taken into account when considering the purchase of a hybrid car compared to an internal combustion engine. While it is true that there are several purchase incentives, it is also true that after 8 years we will have to replace the batteries at an expensive price.

How long does the battery last?

First of all, you should know that the useful life of a battery is a maximum of five years, this is achieved with proper care, since, if not taken care of properly, this time can be reduced by half.
20 november two thousand and nineteen

How to calculate how long a battery lasts?

Formula to calculate the autonomy of a battery (Vb) battery voltage multiplied by (Ic) current consumed, will give us (Wc) power consumed.
The result (Wb) battery power divided by the result (Wc) consumed power, will give us the hours of battery life.
20 oct two thousand and nineteen

How long does a car battery charge last if I don't use it?

So, how long does a car battery last without starting, it is estimated that a parked and unstarted vehicle will sustain the battery charge for about ten days or less, depending on the weather seasons and the consumption of electrical accessories even when the vehicle is turned off.

How do I know if the car battery needs to be replaced?

Car key duplication: How to redo it and how much does it cost? ❯

add a comment of Car battery life: how long does it last and how to prolong it?