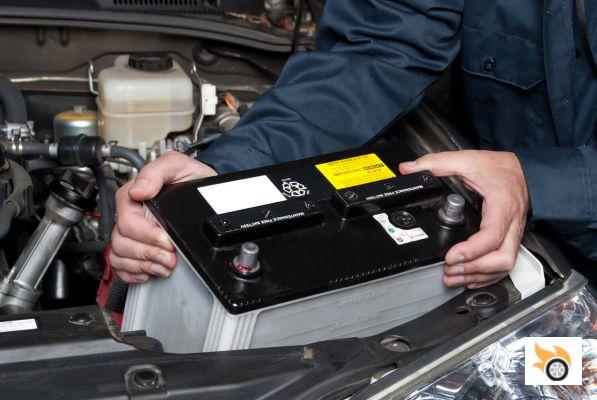 What are the symptoms of a low battery?

The symptoms of a low battery are simple and very easy to notice, especially if you use your car regularly. Remember, however, that if the car won't start the fault may also be from other faulty or malfunctioning components. The car can also stall due to a burnt spark plug or dirty fuel injectors.

Despite this, a suddenly discharged car battery is the most common cause of car starting problems. Let's take a look at the 7 most common symptoms of a low car battery:

It may seem trivial to many people, but the first and most obvious symptom of a low battery is a car that doesn't want to decide to start. The car battery is essential for conserving the electricity produced by the alternator while the engine is running. When the engine stops, the impulse generated by the battery powers all the components responsible for starting the main engine.

If the car's battery is faulty, old or much more likely to be discharged, the car will have difficulty starting or will not start at all.

Therefore, to avoid the continual waste of time of a car that won't start, it is necessary to assess the age of the battery and the possibility that the time has come to request a replacement from the garage.

If the pulse generated by the battery when we turn the key is too weak, the solenoid tends to emit a particular ticking sound, as well as creating obvious difficulties in starting the car. The ticking sound once the key is turned is therefore one of the symptoms of a low battery.

3rd symptom of a low battery: problems with the starter motor.

However, remember that the starter motor can be faulty regardless of the condition of the battery. However, starter motor malfunction can be a symptom of a low battery.

4th symptom of self-discharged battery: slow starting of the car

One of the most typical symptoms of a low car battery is the difficulty in starting the car or the excessive time it takes to start the car. Normally, as soon as the key is turned, the battery should start and power the car's components, including the spark plugs that give life to the engine, as well as the starter motor.


If the ignition of the car takes several seconds, we most likely have a faulty battery that has no charge or simply a discharged car battery. This symptom of a dead car battery does not go unnoticed.

If it only happens once, there is nothing to worry about, but if the car always takes too long to start, it is useful to have a mechanic or electrician check the condition of the car battery.

One of the most well-known car lights is the car battery or alternator light. If this light stays on or flashes, it can be a clear indication of a low car battery.

If the problem is alternator related, the lamp will tend to come on while driving, as the alternator starts running when the engine is running. If the light comes on as soon as we turn the keys and start the engine, it is a sign that the battery is low.

Once the car is started, you may notice that the beam of light created by the headlights is very weak and shallower than normal. This is a clear symptom of a self-discharged battery or a battery that has reached the end of its life.

If the battery is discharged or defective, it will not be able to supply all the electricity needed to power the car's components. One of the components that consume the most electricity are, in fact, the high and low beam headlights. The operation, or rather malfunction, of the headlights is a clear symptom of a self-discharged battery.

When the car's battery is low or malfunctioning, it does not provide the proper amount of electrical power to run all of the electrical components in modern cars. These components include thecar' sspark plugs, which are responsible for igniting the fuel inside the engine's cylinders.

If all of the spark plugs do not receive enough electricity, they may not generate a spark in each combustion cycle. In this case the unexploded fuel tends to build up inside the pistons until the spark plug generates the spark needed to ignite it. The excessive amount of fuel once burned generates an abnormal noise, similar to a crackling sound from the muffler.

If we hear strange noises coming from the muffler (and making sure the spark plugs are in good condition) then this is a clear symptom of a self-discharged battery.

Eighth symptom of a low battery: reset the car clock.

If the clock resets to zero when the car is started, it is likely that the battery has reached the minimum voltage level and has eliminated all functions considered unnecessary. In this way, the car is trying to conserve the energy needed to start the car and avoid stranding you.

This is perhaps one of the most difficult symptoms of a low car battery since, objectively, none of us have our eyes fixed on the car clock when we start the car.

9th Symptom of a self-discharged battery: abnormal lighting of the lights.

This symptom of a self-discharged battery arises when the battery does not provide enough power to operate the car's control unit properly. With low power, the car's ECU "goes crazy" and starts randomly turning on lights.

Obviously, don't underestimate the illumination of the lights, but if too many of them come on at the same time, then you're dealing with one of the symptoms of low battery. It is best to immediately go to an electrician to change the battery and check that the control unit has not been damaged.

Sometimes it happens that the car battery suddenly runs out of power. There are many problems that cause a sudden discharge of the car battery, so let's look at some of them:

How long does a car battery last?

Let's start by dispelling a myth: the car battery doesn't last forever. Like many car components, the battery is also subject to wear and tear which, over time and various charging cycles, tends to erode its performance causing it to malfunction at some point.

To understand how long your car battery lasts, you must first identify how you use your car. A car used regularly for medium to long trips will allow the battery to remain charged and maintain its performance for a longer period of time. Conversely, a car that is rarely used for short trips tends to "stress" the battery more by not allowing it to fully recharge.

That said, a car battery maintained in normal use has an average life of 4-5 years depending on the model. Leave the car idle for a few months without starting it and the battery will tend to discharge to the lowest charge level. If the battery remains in this condition for several days, it can become damaged to such an extent that it needs to be replaced, thus reducing battery life.

Given the cost of batteries and the potentially long average battery life, you should not ignore the symptoms of a self-discharged battery by providing a full charge as soon as you think the battery is low.

How do you recharge a low battery?

If you notice some of the symptoms of a low battery, you can remedy them by recharging the battery in two different ways. Here are the two ways to recharge a low battery:

How much does it cost to replace a self-discharged battery?

Knowing the symptoms of a low battery helps you understand if the battery needs a full recharge or if there is a problem with the car's wiring. If you ignore the symptoms, the battery can discharge to the point where it becomes irreparably damaged and needs to be replaced.

The cost of the car battery depends entirely on the brand and the power/size required for your car. There are several manufacturers on the market, in our opinion very similar to each other, and the power is measured in Amps or Ah.

The cost of the battery itself can vary from a minimum of 50 euros up to 150 euros. To this must be added the cost of the mechanic's labour, which is usually around 30-40 euros. Therefore, a battery change can cost a total of 100 to 250 euros.

What are the symptoms of a failing car battery?

What happens to the plates when a battery is discharged?

If the discharge process continues, even more lead sulfate is deposited on the cell plates and eventually the chemical process that generates the current can no longer take place.
Lead sulfate deposits on the plates are the reason why the battery cannot generate power indefinitely.

What failure is caused by a bad battery?

If your alternator is not running properly, then it will no longer be able to recharge your battery.
You will be able to start your car, you will drive for a while, but your car will shut down at any moment.
The battery will not be able to restart the engine and you will be left in the middle of your trip.
24 june two thousand twenty

When does the car battery start to fail?

To get an idea, a battery at rest should have a minimum voltage of twelve and five V.
Under load it can reach fourteen V peak.
If the amount of voltage drops, it is a sign that the battery may begin to fail.
19 oct two thousand twenty

Low car battery: here's what to do and how to get going again ❯

add a comment of Self-discharged battery: the 9 definitive symptoms and causes