Battery light on: here are all the causes and how to react! 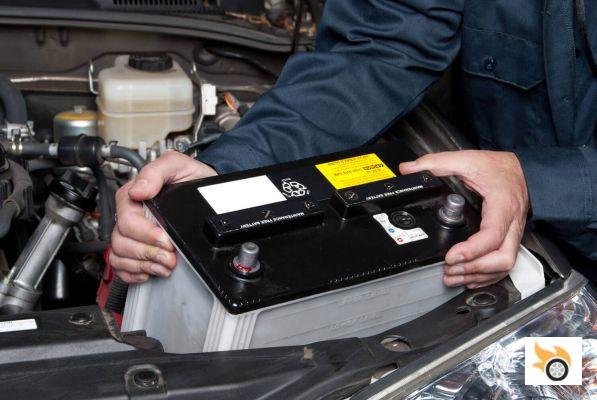 What is the battery light?

Why does the battery light come on?

Therefore, with a red battery light on we can have the following problems:

A check of the battery and alternator by a mechanic usually solves all the doubts about the battery light coming on. So don't panic, let's trust a professional to tell us how to proceed.

Why does the battery light stay on?

Both of these problems are difficult for the average driver to diagnose and therefore a professional is needed. So let's find a mechanic or electrician, tell him that the battery light stays on even though the battery is working and let him get out of the car to check.

The specialist will usually check that there are no broken or cut wires and can therefore indicate the best procedure to remove the battery light stays on.

How come the battery light stays on but the alternator is charged?

Another problem we get called several times a month is a battery light that stays on but the alternator is charged. If we are sure that the alternator is working and producing electricity, then the problem may be in the electrical circuit or in the battery.

If we have no problems using the various electronic equipment in the car, then we can exclude that the problem is in the electrical circuit. Very often we simply have an old battery that has run down. When the battery is too old it does not hold a charge and this can cause us to find the battery light on.


We recommend you take a look at our article where we explain the average battery life of a new car. This way you can see if it's time to replace yours and solve the problem with the battery light on.

What to do with the battery light on and hard steering?

Many people wonder how a simple car battery problem can compromise and make the steering of the car hard. Well, we have to remember that in a modern car the only component that is perhaps not dependent on electricity from the battery and alternator is the ashtray.

With the steering hard and the battery light on, we should assess if the car is safe to drive before we get to a mechanic. Also remember that a moving car is much easier to steer than a stationary car.

What to do if the battery light comes on and then goes out?

This is the last question we are often asked: What to do if the battery light comes on and then goes out? The best answer is to do a battery and alternator check anyway.

That said, the battery light coming on can also be due to a simple voltage drop and there may not be a problem. If it only happens once, there may be no problem. If it happens often, then the car should be taken to the mechanic.

Engine malfunction indicator light: what to do if it is on / blinking ❯

add a comment of Battery light on: here are all the causes and how to react!