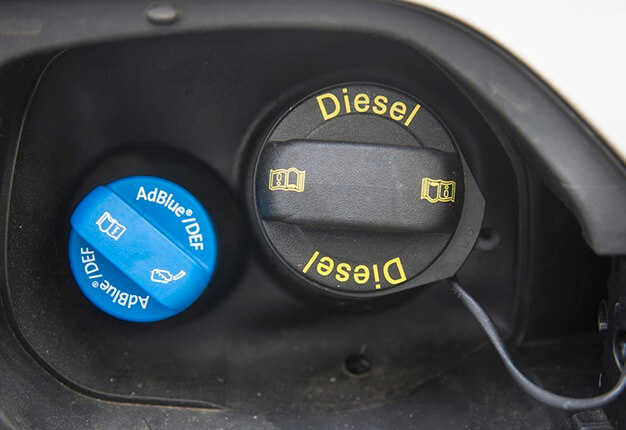 AdBlue: What is it?

AdBlue is an essential fluid for the operation of Euro 6 diesel cars equipped with the Scr catalytic converter. The AdBlue fluid brand, also known as Def (Diesel Exhaust Fluid), is registered by the VDA, Verband der Automobilindustrie, the association comprising all German car manufacturers.

Adblue was introduced as an emergency measure in response to increasing demands from European governments to reduce pollutant emissions from diesel engines. The culmination of these demands came in 2015 in the wake of the Dieselgate scandal, in which several German manufacturers were accused of tampering with their vehicles' pollutant gas emissions measurements.

As well as a product, the AdBlue mark is an indicator of the conformity of the fluid we buy. In fact, it must meet all the quality standards of the ISO 2241 standard. Specifically, to be marked as AdBlue, the solution must contain a specific concentration of technical urea, biuret, metals and calcium, which is crucial to prevent damage to the catalyst.

AdBlue fluid is a 32% solution of technical urea and water that is used to make SCR (Selective Catalytic Reduction) catalytic converters work properly.

What is AdBlue fluid for?

AdBlue fluid is a measure adopted by all diesel car manufacturers to meet the increasing demands of reducing pollutant emissions.

AdBlue is essential for the SCR catalytic converters to work properly. It is injected into the exhaust pipe where it reacts with water vapour at a temperature of more than 200°C. The urea contained in the AdBlue is transformed into carbon dioxide and ammonia, which reacts with the nitrogen oxides to form nitrogen and water.


For those of us who don't have a degree in chemistry, all we need to know is that with the introduction of the SCR system and AdBlue, manufacturers have been able to get on with reducing emissions without having to redesign all their diesel engines. An expense that would have been very high and would certainly have been counterproductive for diesel customers.

How much does AdBlue fluid cost?

The price of a 10 litre can of AdBlue fluid ranges from 8 euros in many online e-retailers (plus shipping and handling) to 25 euros in the most expensive physical shops.

We also remind you that AdBlue liquid is almost always present among the rewards that can be obtained with points from the loyalty cards of petrol stations. Those who travel a lot of kilometres may never have to pay for it.

How long does AdBlue last?

On average, a diesel car consumes 1 litre of AdBlue fluid every 700-1000 km. The exact consumption depends of course on the driving style of the person behind the wheel. Of course, the consumption also increases according to the load of the vehicle, especially in the case of commercial diesel vehicles.

Let's pay attention to the consumption and the AdBlue level because EU legislation does not allow the engine to be started and the car to be driven with an empty AdBlue tank, or you will be fined.

All Euro 6 diesel cars with SCR are conveniently equipped with a warning light that shows the AdBlue fluid level and remaining mileage, similar to normal fuel level indicators.

AdBlue fluid: how is it used?

To use AdBlue fluid there is a very simple procedure to follow. Simply open the blue liquid cap (located on the cap of the diesel tank) and pour in the solution, taking care to avoid contamination from diesel, water or engine oil.

Most AdBlue tanks have a capacity of 10 litres, which, by the way, is also the standard capacity of AdBlue tanks on the market. Obviously it is expected that refilling is done before the tank is completely empty. If you have any AdBlue liquid left over, you can safely store it for the next refill, but only in a closed place away from sunlight.

Where can I buy AdBlue fluid?

AdBlue fluid is sold in most hardware stores , department stores, supermarkets, distributors and garages. You can also buy it at all petrol stations.

For those who prefer to buy online, most large e-commerce stores sell it and often save money.

Scratches in the bodywork? That's how we get rid of them!

Brake light on: what to do and what are the causes?

Defective car thermostat: how much does it cost to replace?

add a comment of AdBlue fluid: what it is, how it works, cost and how long it lasts