Does your car have TPMS or inflation pressure sensors? Don't rely on it 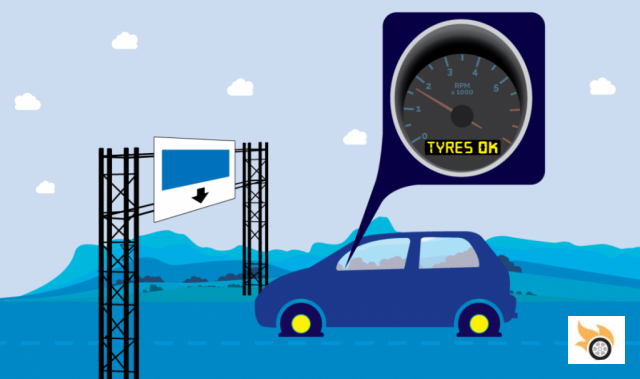 There are two types. The most reliable is the direct TPMS, which measures the pressure in each tyre and informs the control unit, so that each wheel is monitored and a warning can be given in time for the driver to check his tyres. It can be due to an oversight when inflating (leave it for next month) or for having suffered a puncture. Underinflation is very detrimental to dynamics, braking distances and, in general, active safety.

The second type is the one to worry about. Indirect TPMS does not have physical sensors in the tyres themselves, it is a software system. If an abnormal rotational speed is detected on one or more wheels, or if vibrations are detected, the indirect TPMS can detect a drop in pressure. That's what the theory says, but tests commissioned from IDIADA by Transport & Environment tell us otherwise.

There are regulated tests that models have to pass for homologation, which the systems tested comply with (otherwise it would be a problem). When the engineers take the cars out of these standardised assumptions, the indirect TPMS are less reliable than Judas. In a battery of tests on a Volkswagen Golf and a Fiat 500L, the German has only passed two, the Italian has failed them all.

One tyre went flat at 1.4 bar, and in other tests they all went flat. This is a very low pressure and dangerous to drive.

It turns out that the effectiveness of the TPMS decreases dramatically when the tyres start to accumulate kilometres. T&E put it down to manufacturers reducing the sensitivity of the TPMS so that it doesn't start giving false alarms that drive drivers crazy. It is preferable, therefore, that if they have a flat tyre, they kill themselves or have an accident, without any witnesses to bother them, and then bother the after-sales service when the customer goes there.


T&E concludes that more evidence is needed for there to be more scientific evidence of this problem, but it makes a lot of sense. A direct TPMS is always going to be more accurate than ABS programming, and as it costs only £10 more, it's prohibitively expensive for non-premium cars. Insane. If you start to notice a swelling in your blood pressure, that's understandable.

The problem with TPMS is that it can give many drivers the feeling that they don't need to check their tyre pressure, because when they're low on air, the system will warn them. Of course, when it does, and that's a bit late. According to type approval the TPMS should do this:

In other words, when the TPMS warning light comes on, the car owner deserves a paddle because he's been ignoring his tyres for more than 2-3 months. Punctures and blowouts are fortuitous, of course, but carelessness and passivity are inherent to the human factor. Those of us who work in road safety don't understand how more accidents don't happen than there are.


While investigating whether we are facing a new scandal at the industrial level, or there are just some suppliers who make bad sensors, a free tip: with or without TMPS, the tire pressure must be checked within two months since the last time, whether the car is used a lot or little. For one of the few free things in the world, air, let's not skimp on it, because our own safety and the safety of others is at stake. And if it's an inflator that charges one euro, let's consider whether our safety is worth more than that money.

On the trail of the "Cannonball". ❯

add a comment of Does your car have TPMS or inflation pressure sensors? Don't rely on it